The least you need to know about Atlanta's four distilleries

Just a few years ago, the idea of stocking your bar with local spirits would have sounded absurd, but in the past year and a half Atlanta has been quietly reclaiming its pre-Prohibition reputation as a hotbed of spirits production. After nearly a century without a single distillery in town, the metro area is now home to four craft distilleries — two in the city proper, one in Decatur, and one in Kennesaw.

Between them Atlantans can now stock their bars with local vodka, gin, rum, corn whiskey, rye whiskey, and bourbon.

All four distilleries offer tours that feature their individual approaches to distillation. These are no backwoods operations, and the impressive copper stills on display at each distillery (ranging from 118 gallons to 500 gallons in size) show they mean business. The short tours at each distillery also offer the chance to taste the goods, though the state of Georgia seems hell-bent on keeping imbibing to a bare minimum — one and a half ounces is your limit. But these young distilleries are thriving despite Georgia being among the least distillery-friendly states in the country regarding direct-to-consumer sales. The current Georgia law (still a bit in flux) allows distilleries to include a single souvenir bottle with the purchase of a tour, but luckily you can also find these local spirits at an expanding array of local bars and bottle shops. Walk right past the Smirnoff and Jack and just ask, "What's local?"

THE STORY: Old Fourth Distillery is the city of Atlanta's first legal distillery since pre-Prohibition days, right in the heart of Old Fourth Ward with a storefront on Edgewood Avenue. Old Fourth's small tasting room is a museum of Atlanta whiskey history. Even the materials used in the furnishings and décor have their own urban history, like the immaculate Georgia marble reclaimed from the gutted John B. Gordon Elementary School down the street. Old Fourth Distillery started vodka production in late 2014 and has since added gin to the lineup. Expansion is already in the works, with a new facility on Decatur Street breaking ground this spring.

THE STILL: Hybrid pot still made by Carl Artisan Distillery Systems, 118 gallon with an integrated botanicals basket and two sequential side columns. Plus a small fractional still for experimental batches.

COMING SOON: Aging barrels of sourced whiskey in its East Atlanta warehouse (it won't see the light of day as bourbon until 2019)

THE STORY: Lazy Guy's tasting room and distillery reside in a house and barn in historic Kennesaw that date back to the 1800s. The barn in particular gives Lazy Guy a rustic, old-timey feel, though the gleaming copper still adds a flash of contemporary bling. Since 2014, Lazy Guy has been steadily introducing new products, playing with mash bills (the mix of grains that go into the distillate) and lengths of barrel aging to create corn whiskeys, rye, bourbon, and even a cream liqueur. Most of the products are based on local corn from Riverview Farms. Ever since it started, Lazy Guy has been ambitiously stashing away barrels of whiskey for aging, and will soon be offering a straight bourbon (by law, aged at least two years), followed by longer-aged whiskies in the years to come.

THE STILL: Hybrid pot still made by Artisan Still Design, 325 gallon, with a reflux column and condenser column

THE STORY: Independent Distilling Company started up in 2014 with a unique rum that is made on an alembic pot still from table grade molasses, using Champagne yeast to fuel fermentation. It's a method that resembles whiskey distillation more than traditional rum distillation, with the idea being to produce something more flavor-forward than typical rums. Since then, Independent has brought in a larger still and is producing corn whiskey (and an aged bourbon), using corn from Riverview Farms and other local sources. In terms of appearances, Independent is the most bootstrap-y of the Atlanta distilleries, habitating a relatively spare Decatur warehouse space that benefits on tour days from being within sight of BlueTarp Brewing and a stone's throw from Three Taverns Craft Brewery.

THE STILL: Scottish-style hybrid pot still made by Corson Distilling Systems, 500 gallons, with a side column and optional gin basket with dedicated condenser. The original 500-liter alembic pot still made by Hoga also remains in use.

COMING SOON: In the works ... aged rum, an aged 100 percent wheat (from Elberton, Georgia) whiskey, and future products will likely include gin and a malt whiskey. 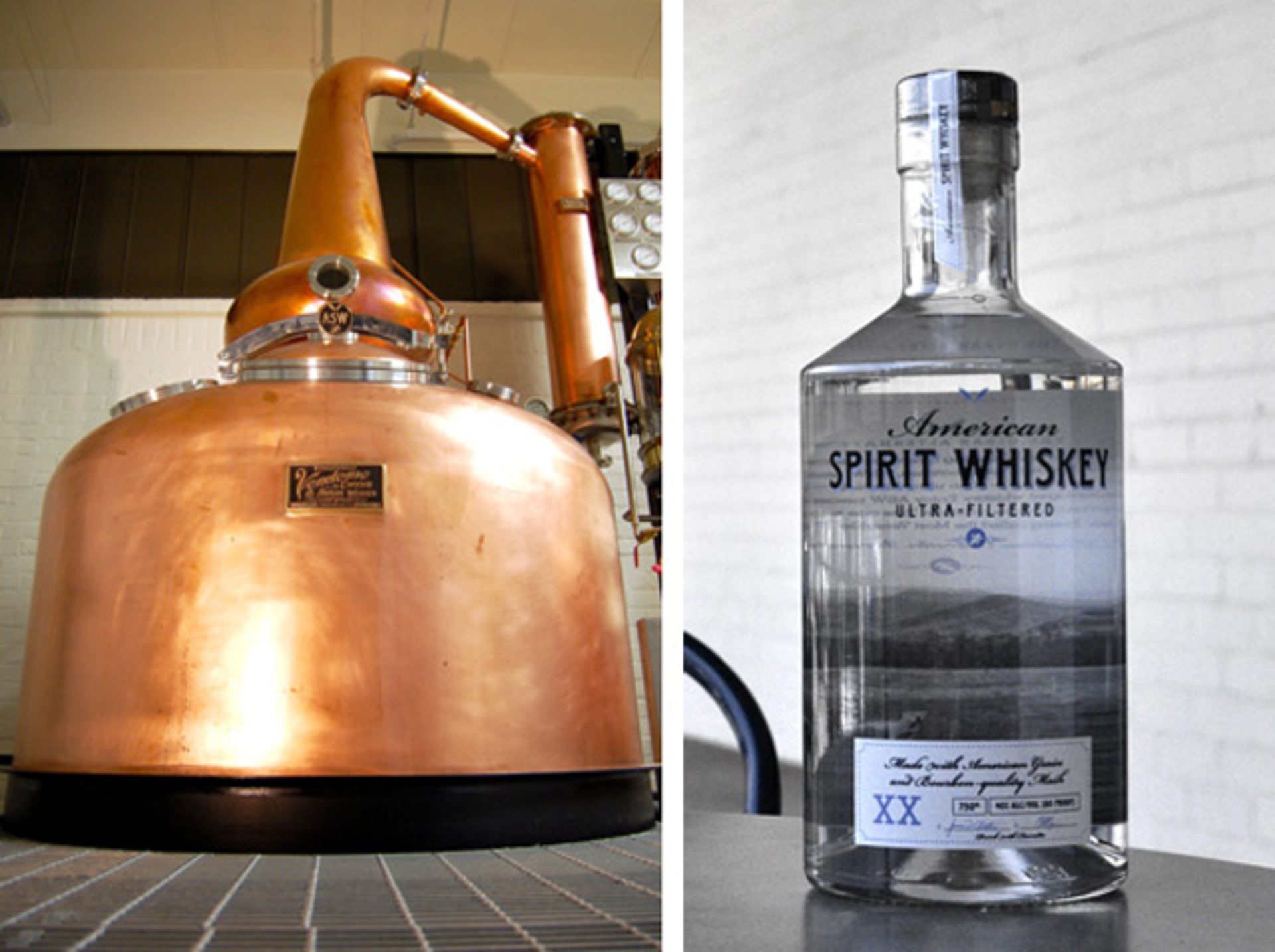 THE STORY: American Spirit Whiskey was founded in 2011, but is just now putting the finishing touches on its Atlanta distillery. The brand's flagship product has been produced through a partner in Charleston, South Carolina, but a new head distiller and a beautiful copper still are awaiting final government approval to start production at the company's new Armour Drive distillery, a short walk down the street from SweetWater Brewing Company. The tasting room and retail store (featuring items like Glencairn whiskey glasses) is the most luxe of the Atlanta distilleries, featuring welcoming touches such as leather couches and an Oriental rug. But the gleaming still and the spirits it will soon produce are the star attraction. Next door, the Stave Room event space (formerly Mason Murer art gallery) even touts its view into the distillery as a primary selling point.

THE STILL: Double pot still with a 500 gallon wash still and a 300 gallon spirit still made by Vendome Copper and Brass Works, with one tube-in-shell condenser and one inverted condenser with glass exterior to view condensation.

• American Spirit Whiskey, 80 proof, unaged and ultra-filtered mix of grain (corn) neutral spirits and corn/rye/barley whiskey, produced in South Carolina since 2011 but shifting to Atlanta "as soon as possible."

VISIT: Details on tours are pending the distillery's final regulatory approvals, but look for tours and tastings Wednesday through Saturday starting late spring or early summer.