The commercial bakery at the Monastery of the Holy Spirit in Conyers doesn't look very monastery-like. Fluorescent light pours down from the lofty ceiling. There are giant stand mixers, electronic scales, and an oven the size of a walk-in cooler. It's modern. Several middle-age monks wearing ball caps and aprons over their T-shirts work in silence. The only noise comes from the clink of a sprayer one of the monks is using to wash sheet pans in a stainless steel sink. If it weren't for a small prayer room off to one side marked with a cross and our enrobed tour guide, Brother Callistus, this bakery could be anywhere.

Situated a few hundred yards from the Abbey where 33 Trappist monks eat, sleep, work, and pray, Monks' Bakery is known for making three things: biscotti, fudge, and fruitcake. Each confection has its own baking season scheduled throughout the year. Early spring means it's time to make the fruitcake.

"Fruitcake is very seasonal," Brother Callistus says. Before taking his vows more than 25 years ago, the veteran monk worked on Wall Street. "We sell some during the year, of course, but the big sales come as you approach Thanksgiving and Christmas. What we're doing now is preparing for that big bang holiday season."

During this year's fruitcake baking cycle, about 30 days total, the monks will produce more than 9,500 cakes. According to bakery manager Brother Philip, it's the most they will have made in a year to date.

Brother Philip has experience baking. He went to culinary school in Pittsburgh and worked as a pastry chef before coming to the Monastery four years ago. With 23 minutes left on the timer, he steps away from the 250 cakes working in the oven to talk process. The monks' fruitcake recipe is a well-kept secret, but he shares what he can in broad strokes. 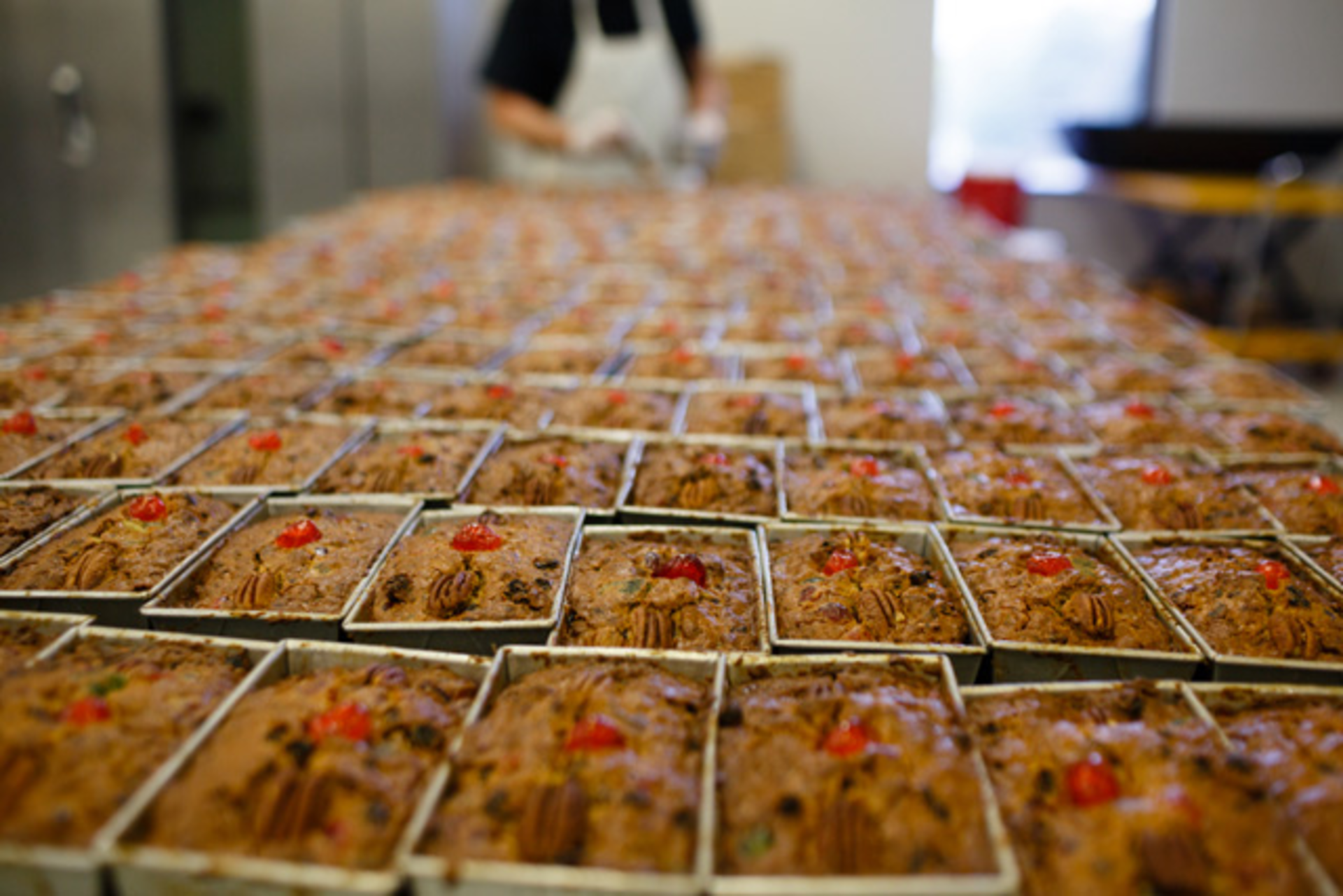 "The batter itself is brown sugar, almond paste, there's butter, eggs, and then flour and spices like cinnamon and nutmeg," he says.

Then they toss in Georgia pecans, raisins, dates, cherries, and pineapple, followed by some local honey, sherry, and brandy. Once blended, they let the batter marinate — undisturbed except for a quick stir twice a day — for three days.

"You could say it comes alive on the third day," Brother Philip says with a chuckle. "It resurrects itself."

On baking day, the monks use stainless steel spatulas to scoop the batter into loaf pans. Next the pans are placed on large sheet trays that fit into a tall, multi-level baking rack. Once loaded, the rack is rolled into the oven for baking. After about 40 minutes, the cakes come out of the oven and are slid onto a long prep table and brushed with a peach brandy glaze. After they've had time to cool, each cake is injected with more brandy and then popped into small, burnt orange boxes that read: Gourmet Southern Fruitcake With Peach Brandy, Made by the Monks of The Monastery of the Holy Spirit, Conyers, Georgia.

From there the cakes are aged several months and eventually sold ($15.95 for a one-pound, $29.95 for the two-pound round cake) at the monastery's gift shop and through its online store.

"It's not high-tech or mass-produced. The monks' hands are actually involved in every level. Maybe that's why it has that unique taste," Brother Callistus says, motioning toward a freshly opened cake sitting on a table nearby. As he slices into the glossy, amber-colored loaf a boozy, festive aroma fills the air.

"And even the calories," he adds with a sly grin. "Since it was made at a monastery, we consider the calories to be blessed."