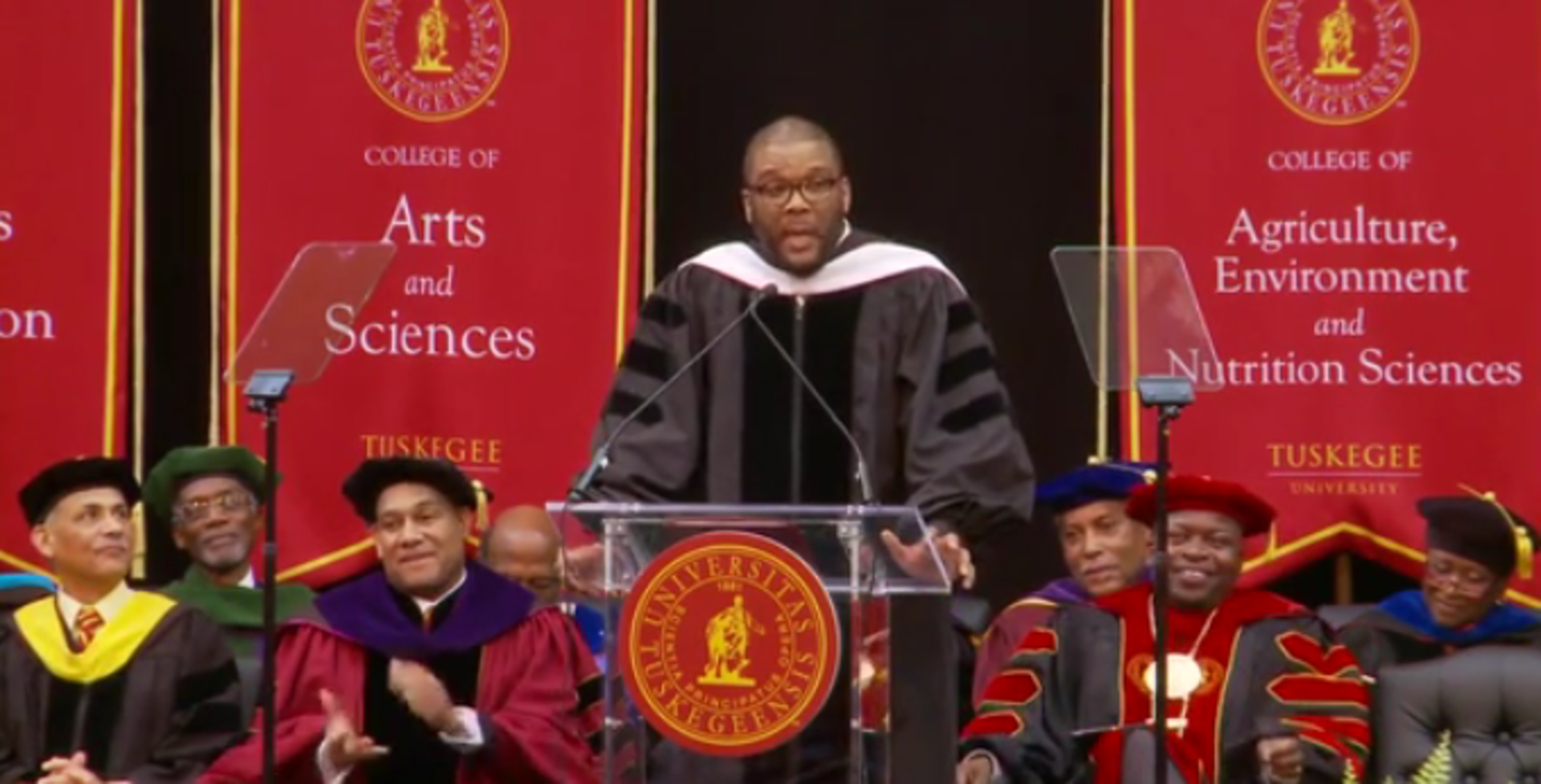 Photo credit:
Atlanta film and TV mogul Tyler Perry received his first honorary doctorate last weekend at Tuskegee University in Alabama. While there, he delivered a graduation commencement speech to the Class of 2016. Couched within that speech was Perry's own redemptive story — how he went from a struggling writer juggling an unfulfilling day job at H&R Block to a the success he is today. He went broke and homeless producing his initial stage play seven times before catching a break with his first sell-out crowd.

He also touched on the criticism he's received over the years, the most scathing of which, he said, from black critics who viewed his outsize characters as caricatures that failed to uphold black America's respectability politics. When he wasn't busy trying to convince Hollywood studio of the validity of his stories, Perry said, he was ducking darts from his own people.

But the most revealing part of the 27-minute speech came near the conclusion when Perry spoke on his highly contested purchase of the 500-acre Fort McPherson, where he intends to build his future studio. He framed the purchase around the same sense of pride he felt when President Obama paid a visit to his studio located deeper in southwest Atlanta near Greenbriar Mall in 2012.


embed-1"When I made my first million dollars, I tell you what I did. I went back and set up shop in the middle of our community — in the hood," Perry said. "I will never forget when President Obama was running for reelection in 2012 and he came to the studio, and to see all of those little black faces lining the streets, holding their flags, waving as the presidential motorcade came driving through the ghetto. I saw hope in their eyes. It made me cry because I realized that some of them know that they can do it, too."

Then came the speech's climax, with Perry contextualizing his purchase of Fort Mac after years of legal challenges and backlash from those who'd held out hope that the land could become a centerpiece for new multi-use development (a bioscience hub had been proposed) and a windfall of jobs for the surrounding community.

"I recently bought Fort McPherson Army Base in Atlanta to build my new studio," he said. "And it's right in the middle of one of the lowest income areas in Atlanta. And I will hire many people from that neighborhood and train them on how to run their own companies. It gives me so much joy to know that an army base that was established and built just a few years after slavery is now owned by a Negro."