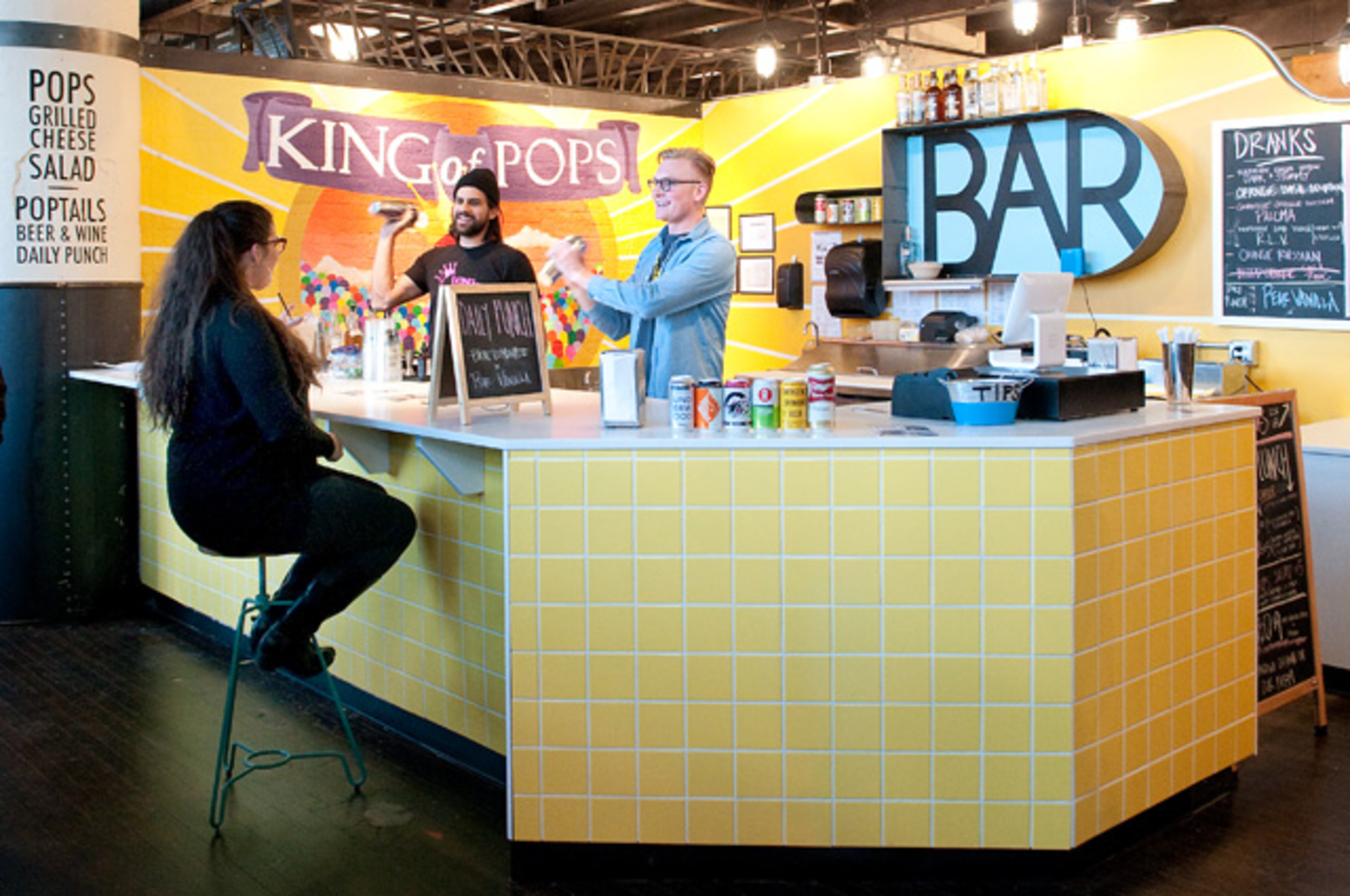 Known mainly for its delightful frozen treats, the King of Pops team decided to expand its repertoire and get in on the Ponce City Market action. The newest addition to the King’s empire? King of Pops Bar and Good Grub (675 Ponce de Leon Ave., 678-732-9321. kopbar.com), which made its debut in early December. For years, says general manager Neil Ringer, fans have clamored for KOP to spin its clever flavor combos into adult beverages. Ringer has been with the company since 2010, the year King of Pops made its debut. His roles have been many and varied within the organization. At one time he managed the production kitchen. Most recently he launched a KOP satellite operation in Charlotte, N.C. Now he oversees the colorful poptail bar and food stall in PCM.


SAY CHEESE: Located adjacent to Honeysuckle Gelato, KOP Bar and Good Grub consists of a short white bar counter flanked with yellow tiles that match the stall’s sunny motif. The idea is that patrons can order a sandwich and a poptail and enjoy them while strolling through the market or posting up at one of the Food Hall’s communal tables. Three pressed sandwiches — all grilled cheese variations — and one salad anchor the food menu, penned by Ringer. The Brd + Chz ($4) is the most basic and consists of two golden-crusted slices of pain de mie bread stuffed with gooey cheddar and provolone. The Letter P ($6.50) is an herby crowd-pleaser made with pesto, prosciutto, sliced pear, and melty mozzarella. Finally, the Fancy Pants ($5) comes on that same pan de mie and is layered with Colby Jack cheese, apples, pickled carrots, grainy mustard, and arugula. The result is a pleasant combo of crisp textures and tangy notes that brighten the blanket of goopy, melted cheese. The King of Crops salad ($6) is a toss of mixed greens, carrot batons, dainty sliced apple, cotija cheese crumbles, and a handful of crunchy corn nuts. For dessert, choose from an array of rotating, you guessed it, frozen pops. Unlike the ones found in carts and freezer cases all over Atlanta, the pops here can be dipped in chocolate, the same chocolate used to make KOP’s beloved chocolate sea salt variety.

SAY CHEERS: The array of cocktails available at any given time do, and will continue to, reflect Georgia’s fruit seasons. Right now citrus fruits are featured prominently in drinks such as the tequila- and soda-based Grapefruit Orange Blossom Paloma ($7.50) and the Orange Basil Bourbon ($8) cocktail made with whiskey, lemon, and basil simple syrup. As the weather warms, expect fruity concoctions built around blueberries, strawberries, peaches, and more. Beyond the cocktails, there is also a handful of local brews available from the likes of Orpheus, Creature Comforts, and Second Self, plus a red and a white wine option if fermented grape juice is more your thing.


FARM-TO-STALL: As the King of Pops’ 68-acre farm in Douglasville, Ga., continues to grow, expect the bar’s offerings to evolve along with it. The farm currently has 13 greenhouses in production and there’s also a legit strawberry field in the works. The hope is to utilize as much of the farm’s produce as possible, “even if it's just using kale or carrots or herbs or something like that,” Ringer says. When asked about the possibility of a full-service KOP restaurant in the future, he says: “We won't say anything's not a possibility. We started, like three new companies this year. We're definitely learning some fun stuff right now, and we've had a lot friends help us out. It's been really exciting.”