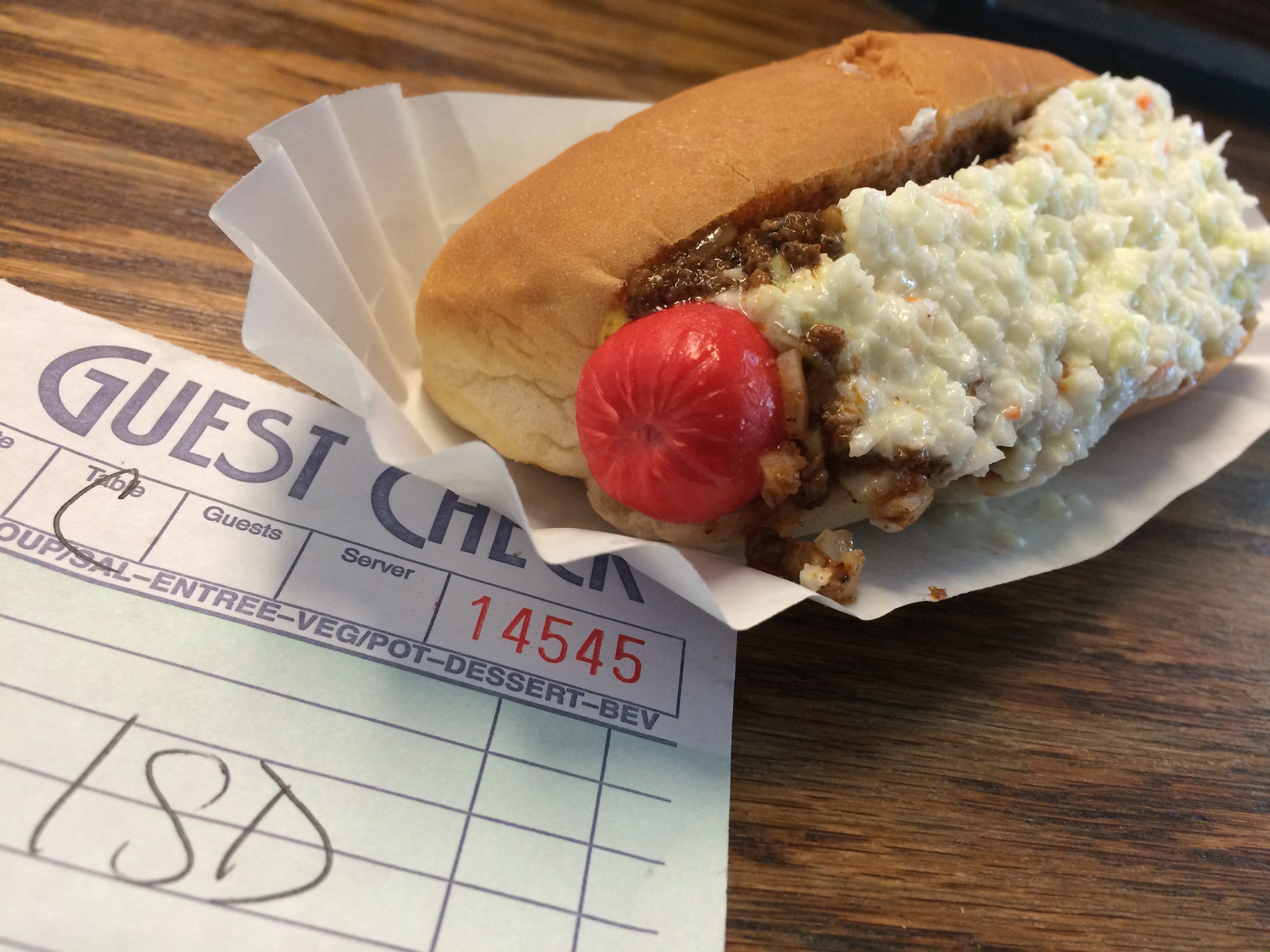 Atlanta has the Varsity, Macon has Nu-Way Weiners, and Marietta has Brandi's World Famous Hot Dogs. They all sell variations on the South's claim to hot dog fame - the chili slaw dog - but if I had to stick to one nuclear-red, chili-drenched, slaw-chilled dog for the rest of my days, it would be Brandi's. Frankly (pun intended), the chili slaw dogs at these three venerable encased-meat stalwarts are not all that different, but Brandi's spicy chili has a subtle but pervasive burn that Nu-Way and the Varsity simply can't muster.

For the uninitiated among you, the Southern chili slaw dog is a masterpiece of Americana comfort food. If you're ordering a plain hot dog, or a simple chili dog, or even just a slaw dog, you're missing out on the crucial interplay between chili and slaw - a tug of war between deeply-browned meat and stark white cabbage, simmered-down umami and crisp-cut sweetness. It doesn't matter if the hot dog itself and the bun are industrial-grade foodstuffs, because when the spread of chili and the plop of slaw make their way on top, any predispositions to organic this or natural that are thrown out the window. The soft bun becomes smushier still as the chili and slaw soak their way down. In fact, you hardly need teeth (I imagine) to enjoy a chili slaw dog, just tastebuds and brain receptors for all things pleasurable in this world.


Brandi's World Famous Hot Dogs has been around since 2002 - a mere toddler compared to Nu-Way, which was founded in 1916, and the Varsity, which has been asking what'll ya have since 1928. Brandi's true history, however, goes a bit further back, to 1981, when Betty's World Famous Hot Dogs opened in Marietta. The short story is that Brandi Wilson bought the shop from Betty in 2002, and has largely kept things the same. Same cute old spot on Church Street, same counter wrapping around the small open kitchen, same recipes, same cash-only policy. Even many of the regulars who pour in each weekday at lunchtime are the same, and the line is often out the door.

Brandi has made a few changes over the years. She has updated (very slightly) some of the decor, and added onion rings, fried pies, and ice cream to the menu. But it's the dogs that are still the main attraction. Regulars often order three at a time, and at $2.15 a piece, that still makes a mighty affordable lunch. Brandi told me, "everybody's a regular here, which makes our job fun."

I asked Brandi about the magic behind her chili slaw dogs, but she holds tight to her hot dog secrets. "People try to copy us!," she says. One myth she was willing to dispel was that the stimulating burn in her chili slaw dog might arise from the hot dogs themselves or the water they are boiled in. No, she does not put hot sauce in the water; and no, the hot dogs themselves are not spicy - they are quite tame. The zing is all in the chili, a bean-free (of course) concoction of meat and spice that is made daily, six gallons at a time. The hot dogs are a beef and pork combination, with a unnaturally bright red casing. And the slaw is finely chopped and processed to a near mush, the sweet mayonnaise base offering a perfectly cool and crisp counterpart to any spicy chili that might come along. A quick slather of mustard and sprinkling of finely chopped onion also comes standard at Brandi's. No disrespect to the Varsity or Nu-Way, but Brandi's chili slaw dog has simply formed the more perfect union of chili and slaw and dog and bun.

Beware: the small parking lot around Brandi's fills fast at lunch, and the lot next door is ringed with signs warning that your car might be towed if you leave the premises. That said, I noticed several cops parking in the next-door lot and making the walk over to Brandi's. I guess the tow trucks know better than to mess with them. There's also a Brandi's up in Cartersville if you happen to be up that way. Same great chili slaw dogs, just a different location.