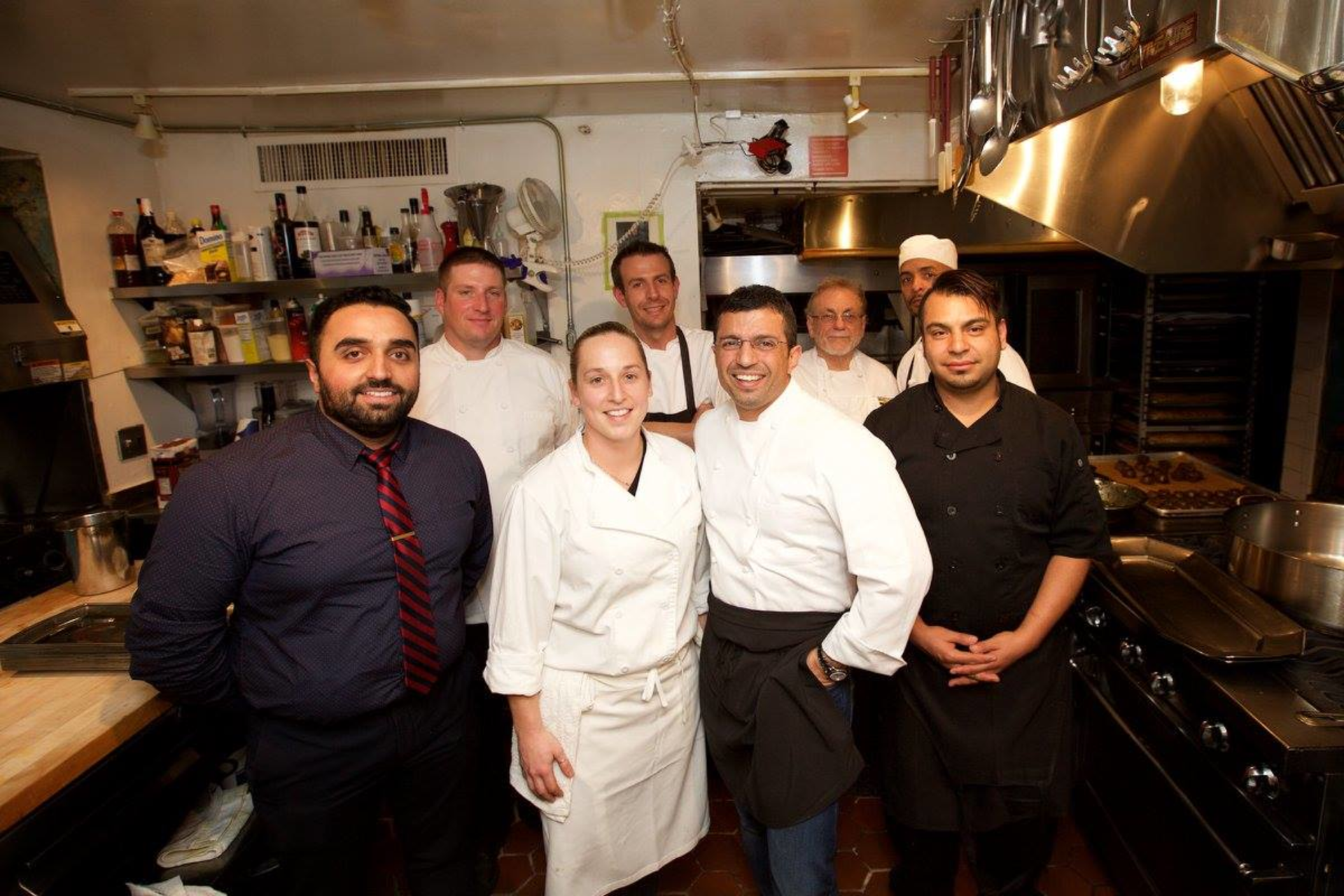 Photo credit:
Rumi's Kitchen in Sandy Springs has been a beacon of Persian cuisine on the Atlanta dining scene for the past ten years now, but chef/owner Ali Mesghali has gotten some recent attention beyond our city - he was invited to cook at the James Beard House in New York for a special dinner celebrating the Persian festival of Nowruz.

Mesghali actually opened his first Persian restaurant, Shamshiri, in 1998, which was followed by Persepolis in 2000, and then Rumi's Kitchen in 2006. In the past year, though, chef Mesghali has been introducing a new set of dishes to his loyal patrons, dishes that reflect the current embrace of Middle Eastern cuisines happening from the Beard House on down to home kitchens filled with new cookbooks inspired by the region.

The well-established staples at Mesghali's restaurants have long been undeniably appealing - flavorful kabobs, intricately spiced rice dishes. But on a recent visit, I noticed that Rumi's Kitchen was using their specials menu to amp up the intrigue, with dishes like a parsnip hummus topped with rich chunks of lamb belly, or a thick puree of beets layered with zatar spice, chopped hazelnuts, and goat cheese.

I couldn't help but think of some of the recipes found in best-selling cookbooks like Jerusalem, by Yotam Ottolenghi and Sami Tamimi, or chef Michael Solomonov's Zahav, which won the James Beard award for Best Book this year. These are dishes well-grounded in the melting pot of Middle Eastern foodways, but which still remain fairly new to American palates. Maybe that's why restaurants like Solomonov's Zahav in Philadelphia, Shaya in New Orleans (recent winner of the James Beard award for Best New Restaurant in the U.S.), or even Todd Ginsberg's Yalla here at Krog Street Market have gotten such acclaim - they unabashedly offer up the foods of the Middle East in a way that respects and showcases the unending richness of these centuries-old cuisines.

Fortunately for Atlanta, Rumi's Kitchen is doing the same. I checked in with Mesghali to hear how the James Beard dinner went, what his plans are for Rumi's, and to get his thoughts on the state of Persian cuisine in Atlanta and beyond.

You were recently invited to cook a dinner celebrating the Persian festival of Nowruz at the James Beard House in New York - how was that?

It was an honor to get invited. A little hectic getting everything transported up there, but overall it was a successful dinner. I think the most important lesson I learned was that when you put your heart into what you love anything can happen. Ten years ago when I opened Rumi's, I could have never imagined we would get invited to do a James Beard dinner.

How has the menu at Rumi's changed over the past ten years?

The main menu has remained pretty constant, because that is the core of our menu that has gotten us to where we are today. Even through the recession, we never had less than a 15% sales increase (each year). With that kind of demand, we are sensitive about making sure it stays the same. Occasionally, when we have a special that we can never take off our specials list because people love it so much, we add it to the main menu.

It looks like the specials menu has become a bit more adventurous though, with dishes like the beet spread and a butternut squash spread with tahini and date syrup?

We started these newer specials within the last two years. There is just so much food and ingredients in the Middle East that are so amazing and so under-utilized here in the states that we want to incorporate those flavors as much as we can, to separate us from your other run of the mill restaurants. The feedback has been so overwhelmingly positive from the guests that we are going to actually be adding the beet and butternut squash spread to our regular menu. To talk about the direction we are going in - two of my favorite restaurants in the city are Umi and Cakes & Ale. When I eat at Cakes & Ale, I am always excited to see what he is cooking. I want the guests (at Rumi's) to always have that same anticipation, to always be excited about what Rumi's is doing next.

What do you think of what's going on more broadly in the U.S. (and globally) with the current embrace of Middle Eastern cuisines, especially at restaurants like Zahav and Shaya?

I haven't had a chance to eat at Zahav or Shaya yet, though I know of them well. I do have the Jerusalem cookbook and love what Ottolenghi has done - it seems he is a very talented chef. I think those restaurants have played a large role in the breakout of Middle Eastern cuisine as a whole. But in all honesty, as far as here in Atlanta, I think Rumi's has played a big role in bringing Middle Eastern food to the forefront of modern cuisine. I started this restaurant serving 70 people on Saturday nights, and ten years later, we served 1700 people this Mother's Day. But our model has been to educate our guests on the food we serve and how to eat it, and I think we have done that. This is evidenced by the fact that 80% of our guests are American and ingredients like sumac, rose water, barberries, etc., are now household names to a lot of our guests. In 1977 when I first came to the United States, even pistachios were a novelty. The broader embrace of Middle Eastern cuisine certainly has helped influence my approach, but I had the vision to bring Persian food to mainstream cuisine since I was a kid working in Persian restaurants in L.A.

I understand your father was cooking in Persian restaurants here in Atlanta before you opened your own restaurants?

My dad moved to Atlanta in 1990, but originally emigrated to Los Angeles in the 1980's. My dad actually wasn't a chef by trade; in fact, growing up in Iran we had chefs who cooked for us in our homes, (so) he never cooked at all. After the revolution in Iran, we moved to the United States and lost everything. My dad, however, always had a love for food. We would always eat out in Iran. So my dad started working in restaurants in the United States to make a living to support my brother and me. Someone opened a restaurant in Atlanta called "1001 Nights" and brought my dad to Atlanta to work at the restaurant, that's why we came here. Now, about 95% of the Persian restaurants in Atlanta are run by people who worked under my dad or me at some point.

Beyond the (previously announced) expansion of Rumi's Kitchen to Avalon next year, what else is in the works?

We are currently looking for locations outside of Georgia, in Houston, Dallas, Washington, D.C.... We don't know where the next stop will be, but those are the places we are looking. We are also developing a fast casual version of the Rumi's concept.

Are you trying to stick with Persian roots, or are you extending to more of a melting pot approach to the Middle East?

Persian food is already a melting pot of all those different cultures. While Persia currently consists of only present day Iran, the Persian Empire used to span almost the entire Middle East. So elements from all those cultures still exist in Persian cuisine today. We have barely scratched the surface of the full gamut of what Persian cuisine has to offer.