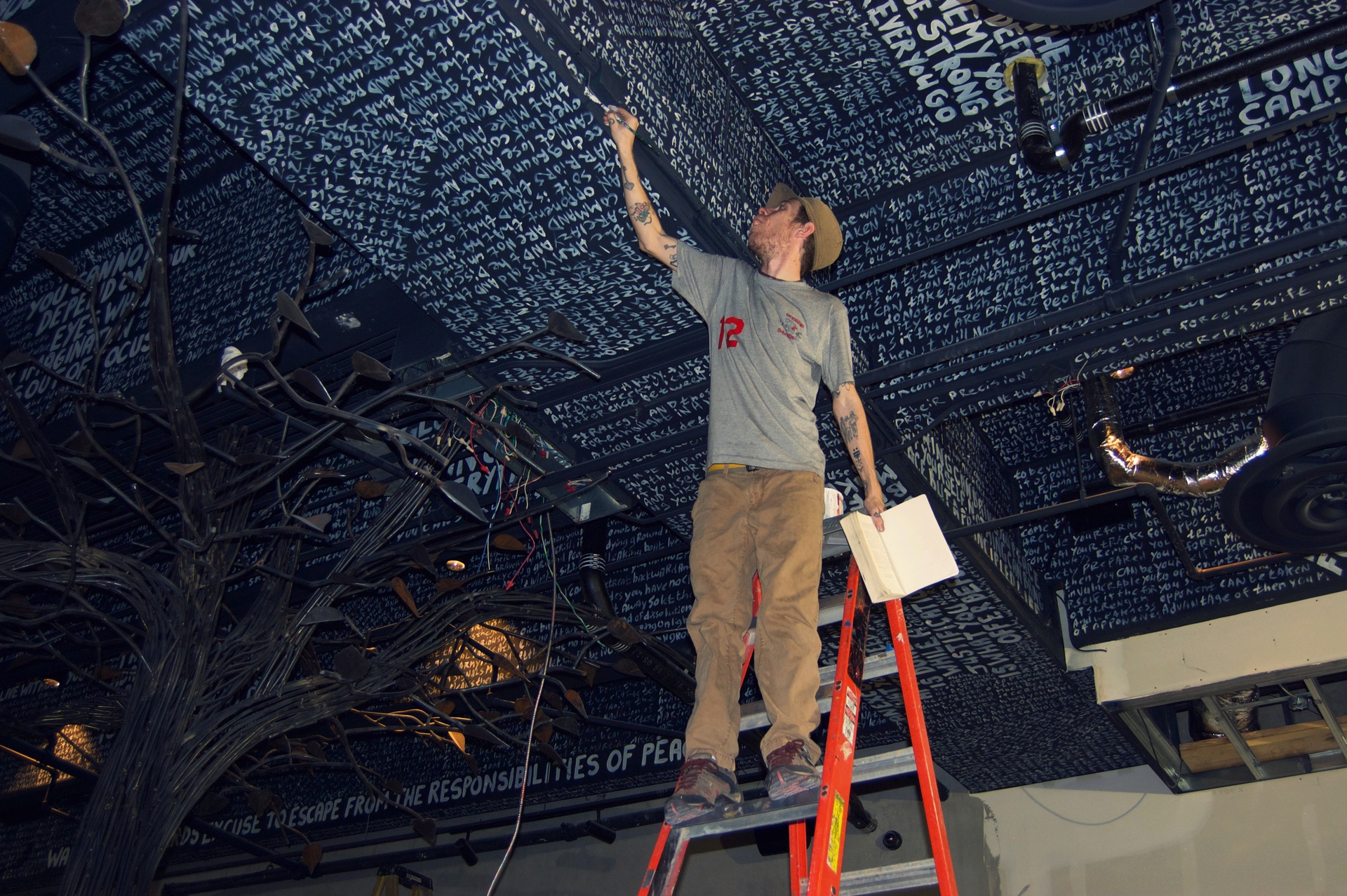 “There is only we” is freshly painted above the sprawling bar at Midtown's new 5Church (1197 Peachtree St. N.E., 404-400-3669. www.5churchatlanta.com), which opened at Colony Square last Friday. Open for dinner seven nights a week, "5Church combines a technique-driven menu with cutting-edge design and genuine hospitality for a memorable dining experience," says the press release. It is the third location from restaurateurs Patrick Whalen, Ayman Kamel, Alejandro Torio and Jamie Lynch. The others are located in Charlotte, N.C. and Charleston, S.C.

If you happen to find yourself at 5Church, look up and let the words sink in. There are a lot of them. It's inspirational advice not from a Pinterest meme or from the Dalai Lama, but from a 2500 year old strategic military manuscript. Chinese general Sun Tzu's The Art of War to be exact. Written in the 5th century BC, this treatise holds guidance and strategic thinking applicable to many situations, even restaurants.

Artist Jon Norris is responsible for 5Church's black hand-painted ceiling, which features the text from all 13 chapters of The Art of War in chalky white paint. Not surprisingly, the broad strokes tracing Norris' personal history fit Tzu's doctrine, as well.

You have to believe in yourself.
Norris, a Baltimore native who lives in Charlotte, is self-taught. His grandmother encouraged him with drawing and painting — Ninja Turtles when he was 4 years old and then a commissioned portrait of Dr. Dre and Snoop Dogg in 6th grade, which he sold for five bucks. Eventually he took his work to the street, painting murals. It was there where, charcoal in hand, Norris met a guy (one of the three original owners, Mills Howell) and painted his house (and the ceiling), which overlooks the original 5Church. From that house painting came the idea to cover 5Church in words. “They had this idea to write on the ceiling— very tedious work. They wanted to make it look like a crazy person’s writing on the ceiling. It’s kind of surreal…the whole evolution and how it has changed my life.”

Opportunities multiply as they are seized.
Norris was asked to paint the original 5Church in Charlotte on 11/11/11. Since then, the 5Church crew has opened a location in Charleston, and now Atlanta.

Let your plans be dark and impenetrable at night, and when you move, fall like a thunderbolt.
He works for about 12 hours each night. “I come in and work real hard for six hours and then I pace,” he says. Norris paints in silence even though he has a love of music. His wife, Kristin, recites passages to him. She also reads another book while reading aloud to him, about a book a week.

Move swift as the wind and closely formed as the wood.
Painting the first 5Church in Charlotte in 2012 took Norris 6 months but he didn’t employ the same system that he does today, painting every night with Kristin reading to him. “Reading to myself was hard. I don’t like reading. I don’t like writing. I just love the brush,” he said with a bright smile. He uses a specific type of brush, square and fat Princeton brushes, because he was once gifted a set. “What you do with brushes is you give them a memory. It’s vital to have that muscle memory with a brush. The older it gets, the better it gets.” The color of the paint is also sentimental. He chose Arcade White because he loves the music of Arcade Fire.

Speed is the essence of war.
This being his third go at painting The Art of War, Norris’ technique is down to about 19 days. At the time of our interview he was at day 23 with about ten days to go. This 5Church has two ceilings to paint, with a downstairs and private dining area upstairs.
Secret operations are essential in war; upon them the army relies to make its every move.
Each 5Church has the complete Art of War painted upon the walls, all 13 chapters. Norris couldn’t help but hide some of his personality among the carefully lettered words. Look for song lyrics and quotes from other writers and poets that resonate with him. “I love music; I write music everywhere.” In Charlotte, the lyrics to Pink Floyd’s Dogs of War, a Simpson’s episode, and Allen Ginsberg’s complete Howl (2903 words!) are woven into secret places. Charleston has a bit of One Flew Over the Cuckoo’s Nest. His disdain for the Denver bronco’s winning the Super Bowl is your quest in the Atlanta Location. “I also paint strange things to get people to stop looking at their cellphones.”

If the mind is willing, the flesh could go on and on without many things.
Tedious is an understatement when describing the lettering process on the ceiling. There are ducts and pipes and tubes and teensy spaces that need painted. Norris has to contort his body to fit. How does he get in and out of those conduits? “I just really know how to work ladders. “His exercise routine—“just stretch,” he says. “You are going to get into pain somewhere though. It is such a strain on the body and mind.”

Be extremely mysterious, even to the point of soundlessness.
Near the large custom metal tree with spreading branches is a quote “War is the coward’s excuse to escape from the responsibility of peace,” which seems diametrically opposed to The Art of War. “I am a very peaceful person,” Norris says of that one.

Treat your men as you would your own beloved sons. And they will follow you into the deepest valley.
So why The Art of War? Partner Patrick Whalen chose the text. Kamel said it is because it is so inspiring. “It was written like 3000 years ago and every theory in the book you can apply to everyday life. ‘There is only we’ describes who we are at 5Church. We are a team. Norris described it by saying “You gotta feel it. These guys are kind. It’s so hard to get that from people.” It is what gives him inspiration. “If these guys … if we weren’t so close and they didn’t treat me right, I wouldn’t be doing this. I say no to a lot of people.”

To see victory only when it is within the ken of the common herd is not the acme of excellence.
Norris’ painting style is wildly varied and cannot be confined to one genre. “I go in all different directions. Other artists get somewhere and stick with it. I, as an artist want to grow and expand.” He quoted Salvador Dali after he said this: “What is important is to spread confusion, not eliminate it.”
Thus what enables the wise sovereign and good general to strike and conquer and achieve things beyond the reach of ordinary men is foreknowledge.
Before painting The Art of War, Norris had heard of the book but never read it. He has now painted it three times. “I am actually able to finish sentences on it. If the zombie apocalypse happens, I am probably going to be the leader. I hear the words over and over on how to strategically win a war. It plays chess with your mind…leader of the new world.”