Barfly - Under hypnosis, even Santa sucks at Eddie's Attic

Getting very sleepy - and cheesy - for the kids

It's Friday night in Decatur and the Mayor of Ponce and I are at Eddie's Attic. Local nonprofit darling One Love Generation has hired the self-proclaimed "Bad Boy of Hypnosis" to put a group of local personalities under his spell to raise money to send a group of artistic kiddos on a culture and service trip.

We're skeptical. Not about the fundraising part, obviously, but the hypnotism bit. It can't really work, can it?

The comedian/hypnotist certainly looks the part. With his black jeans, black vest and thinning hair, Mark Irish is very much the type of guy you would expect to have hung out at the local magic shop learning hypnosis to become popular and make the cute redhead his girlfriend. (From the look of his assistant, the last part seems to have worked.)

He saunters on stage to the refrain of "Bad to the Bone" and, in case the crowd has not yet fully appreciated his bad ass-ness, the renowned hypnotist regales the crowd with stories of his wayward ways.

Like the time he was kicked out of a Kroger for hypnotizing people to make them believe they were shopping-cart cops. Or the time he suggested to male shoppers that the department store mannequins were real babes and was then forcibly removed from Macy's.

He then introduced the crowd to his pet bunny Einstein. Note that the bunny was handed to him; he did not pull it out of a hat. It makes no sense. The guy's a hypnotist, not a magician, so why the hell is there a rabbit? It wasn't even a red-eyed psycho bunny. It was kind of cute. (Update: We did a little research later, turns out Mr. Irish is a magician ... and a motivational speaker.)

Needless to say, few really believe someone can be hypnotized, much less by this guy, but everyone is all too eager to spend an evening pointing and laughing.

The room is converted into a massage therapy station as Mr. Irish slowly counts to five and tells his victims to relax and pretend the forehead is the "window to your soul."

A few participants' heads began bobbing while others sit back drinking their beer. One girl is completely slumped over with her wine-and-Brie pooch poking out. (Mr. Irish asks her to return to her seat. It appears she isn't hypnotized, just really sleepy after three glasses of Pinot Noir.)

At one point, the hypnotist tells the group that their famous fathers have given them daddy issues. Like Humphreys, who describes his father, Santa Claus, as a hoarder. Alston laments about his absent father, the Tooth Fairy, and Humphreys tells him to quit whining: "I don't know why he's complaining. His dad made money; we gave shit away."

Then the group is on a Jerry Springer-esque show and a very emotional Harris confesses that she is in love - with a red clown shoe.

Alston, her fiancé, is appalled. "You've been bleepin' the bleepin' shoe when I'm on the road!?"

Apparently, he is now a redneck truck driver who can't curse.

The lights eventually come back on and the crowd - a veritable who's who of the Atlanta social scene - is demanding to know whether or not the group was really under Mr. Irish's influence.

The next morning I get a message.

"That was some fake-ass hypnosis," texts my friend Amy. "But I definitely laughed my ass off."

Real or not, it was a hell of a tax-deductible time.

Omnivore - 5 restaurants to hit up when you're in Vinings Article

Originally known as "Crossroads" when it was founded in the 1800s, Vinings might not be the hippest, most accessible area of town, but this neighborhood - nestled between Atlanta, Buckhead, and Smyrna - is home to more than just ridiculously large homes and the Home Depot headquarters. We swear.

All Day: Canoe
When someone else is picking up the tab, there is no...

Check out our Atlanta Food & Wine Festival 2013 photo gallery by Alyssa Pointer and our highlights from Day One and Day Two. 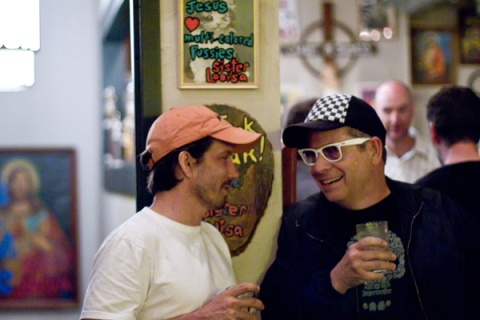 A sanctuary for holy humorists and P-word enthusiasts | more...

Where the love is multilingual and pookie-boos abound | more...

Barfly - One flew over the Koo Koo Room Article

Midtown's hidden den of shenanigans could use some padded walls | more...
Search for more by Jes Reece
[Admin link: Barfly - Under hypnosis, even Santa sucks at Eddie's Attic]