Barfly - Radical Faeries bring the magic for the summer solstice

The queer group deviated from the Midtown norm during Stonewall Week 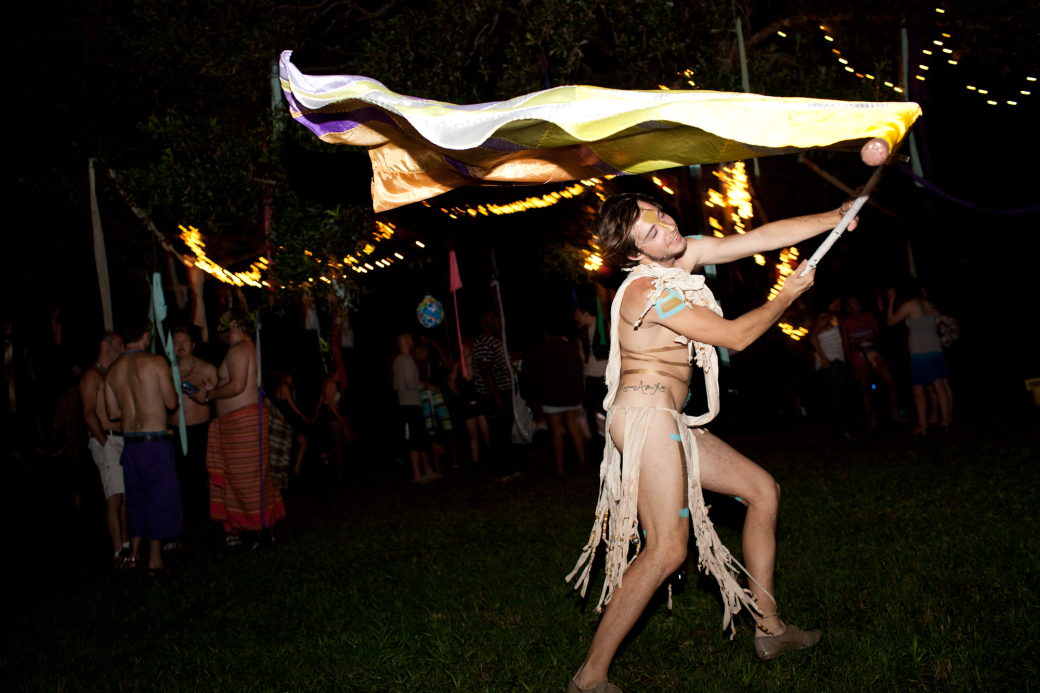 This week marked the 42nd anniversary of the Stonewall riots that sparked the global gay rights movement. More exciting, New York passed gay marriage into law — with the help of Republicans, no less. But those 'mo-ments didn't compare to the Summer Solstice celebration last Saturday. The kickoff to the best season was thrown by the Atlanta Radical Faeries, an organized group of tree-hugging, touchy-feely, shower-resistant gays.

Since Atlanta moved its Gay Pride to October (June is too hot, anyway), the last week in June has been rebranded as Stonewall Week in a self-conscious effort to stay in line with every other city's Pride celebration. Still, it's hardly acknowledged.

The Art Exchange, in the shadows of I-20 in Grant Park, was transformed to a Faerie haven to observe the longest day and shortest night of the year. Walking into the building with hallways lined with Lumiere candles was equal parts arousing and spooky. Wunder-DJ Vicki Powell spun electro-pop remixes in the high school-looking auditorium down the hall to the left. On the floor were nine mattresses with people laying on them dressed in body glitter or DIY drag.

I felt a prickliness on my leg. I had stepped too close to the mattress and brushed up against the hair of Atlanta's beloved Beltline crusader Angel Poventud. "This is all TLC," he explained of the event celebrated on Stonewall weekend. Unlike Gay Pride, he said, "there are no corporate sponsors, no Coca-Cola, no Budweiser." Just all the hard work of the imaginative Faeries.

I go down the series of candlelit stairs marked with "Love ... Magic ... Penis" in chalk to an open expanse of true midsummer glory. Streamers and lights hung from tree branches while tents circled the enclave. A high swing was tied up to a tree for all the gays to have their Mariah Carey moment. The Faeries sold magic meatballs and had a special bake sale during the free, BYOB event. The treats were to die for — and not a crumb of granola in sight.

"Midsummer's night" is the only summer party you can wear next to nothing and not worry about your physique — or lack there of. Partygoers wore togas with laurels, head-to-toe glitter, giant alien drag, 8-inch heels with an even bigger inflatable wig, and sinister disco jester chic. The costumes didn't have to make sense, they just had to be flashy and abstract. In fact, the fewer the clothes, the better. There was a former "Top Chef" contestant, too, rocking his Grecian finest. The only thing missing was a prancing Pied Piper.

The DJ was playing disco hits of yesteryear when I walked back into the auditorium. DIY props were thrown about the room and a curtain projected the silhouettes of recognizable dancers. Despite the body odor, the dance floor was relatively sparse. The shadowy bodies moved methodically to the electro beat while people lay on the floor pads. I felt like I was dancing with the ghosts of gay past. One bad trip and this could be a '70s high school horror movie set.

The Faeries might be the best thing about gay life in Atlanta. They are the only ones doing anything interesting from the Midtown norm, and it all comes straight from their flower-child hearts. Despite my fondness for personal hygiene, I'll gladly give a Faerie a sloppy on-the-mouth kiss (their favored method of greeting) instead of my usual distanced nod. They transformed a plain building into a magical retreat, but like the godmothers of fairy tales, it's all gone when the sun comes up.