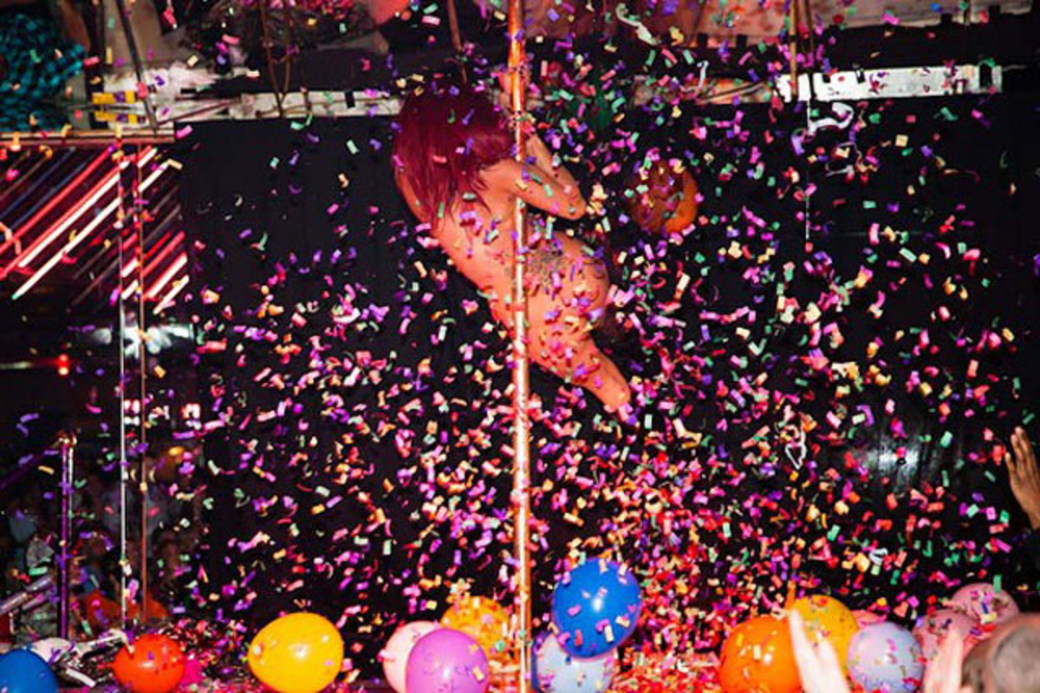 Buford Highway, as far as I'm concerned, is as close to a perfect place as you can get. You can find food from more countries than most people can label on a map and traffic gets bad enough to make you feel that warm, fuzzy, classic Atlanta road rage, but it's certainly not the worst in town. And if the multicultural retail and dining experiences become too overwhelming to handle, you can take refuge in the most sacred of Buford Highway holy places: the Pink Pony.

At least, for now you can. An ordinance by the City of Brookhaven modeled after some of the same measures used over the years by new cities to crack down on nude dancing is threatening to shut down the landmark.

Last spring, the 22-year-old strip club filed a lawsuit against the recently incorporated city. The suit challenges a new ordinance passed that effectively renders the Pink Pony's business model illegal. If enforced, the ordinance would force the club to shut its doors. In late December 2013, the suit was tossed out of a DeKalb County Superior Court on its glittery ass. Like all the best asses do, the club promptly bounced back and filed an appeal with the Georgia Supreme Court, which must decide whether to hear the case later this year.

In the meantime, the dispute is raising some interesting questions about a number of issues.

The lawsuit was first filed back in May of 2013 when Brookhaven passed an ordinance that mandated that businesses could either serve alcohol or get full-ass nekkid. The Pink Pony does both because, I mean, peas and carrots, right? Who in their right mind wants to be at a strip club sober, and what drunk person doesn't want to see naked people dance? Strip clubs' formula for success isn't mysterious — but it might not be legally viable for long, at least not in Brookhaven.

The list of allegations the Pink Pony outlined in its complaint is pretty meaty, and includes a claim that Brookhaven was incorporated improperly. The club also argues that, per settlements made back in 2001 and 2007 with DeKalb County, the Pink Pony, as well as eight other strip clubs, are supposed to be guaranteed the ability to offer patrons both the full monty and alcohol until 2032. In exchange, the clubs pay $100,000 per year in licensing fees. Alan Begner, lead counsel for the Pink Pony, told CL in late December that the club's made major investments and business decisions based on this arrangement.

Under the ordinance, which was crafted with the help of an attorney who's made a name for himself targeting adult businesses, the Pink Pony and other strip clubs in Brookhaven would have to put a halt to alcohol sales and full nudity. Partially nude dancing would still be allowed ("T" but no "A"), but even that degree of exposure could only happen in a booze-free place. Alternately, clubs could still serve alcohol but all dancers could be required to cover up more than they might on a beach. Establishments like Hooters would still be legal.

Unlike many other new cities that sprung out of previously unincorporated locales in North DeKalb and North Fulton, which encompass largely residential areas (and pretty vanilla commercial sections where they do exist), Brookhaven is distinctly heterogeneous, with neighborhoods that span disparate income brackets, and zones that house businesses ranging from day care centers to, well, strip clubs.

DeKalb County has spent decades learning how to govern areas with such radical social and economic confluence. It's a complex balance of a hell of a lot of different interests.

Opponents of this new ordinance — many of whom opposed the incorporation of Brookhaven back in 2012 — worry that perhaps this is the first sign that a new layer of government is threatening to disturb the balance upheld by the county in favor of protecting the moral and aesthetic interests of a few.

The conflict brings focus to a more general point about what factors drive the development of communities and cities. Is it acceptable for Brookhaven to establish an ordinance that effectively threatens to destroy a longtime business's livelihood? Should a city like Brookhaven, which encompasses a broad range of neighborhoods, be responsible for considering the interests of all of its constituents?

A common justification for the prohibition of nudity and alcohol sales being provided in the same establishment is to curtail instances of violence and crime. It's worth noting that since opening in 1991, the Pink Pony has never been cited for criminal activity.

The implications of the recent court ruling go beyond this one instance. Being that the judge opted to simply dismiss the case as opposed to going through a more thorough exploration of each side's argument in a discovery process, the decision raises questions not only about whether the Pink Pony was given a fair shot, but about whether or not other businesses would be given an opportunity to represent themselves in similar situations.

What then for the rest of Brookhaven? Are businesses and residents now under the governance of leaders whose agenda could threaten the ecology of this unique part of town? Are casualties of this agenda — like the Pink Pony — going to be blown off when they attempt to fight back?

As it stands, Brookhaven has two choices: Sit back and allow the Pink Pony to continue operating as normal — with bountiful amounts of boobs, butts, and booze — while waiting to see how the dispute unfolds in the Georgia Supreme Court, or they could attempt to start enforcing the ordinance, and risk owing the Pink Pony millions in damages if the appeal works out in their favor.

Begner doesn't believe it would be in Brookhaven's best interest to carry out the ordinance.

"We will continue ... dancing and serving alcohol," he said. "If Brookhaven thinks this is a big victory and they can start enforcing their law against us and try to put us out of business, and the Supreme Court of Georgia sends the case back, then the amount of damages that will have occurred in the 10 months or so to now, will easily exceed $20 million."

As of the beginning of January, city officials still haven't announced their next move, stating that they are "currently consulting the city's legal team to fully understand the court's decision and discuss plans for enforcement."