Peaceful marches are meant to spark dialogue. Policy change needs to come next. 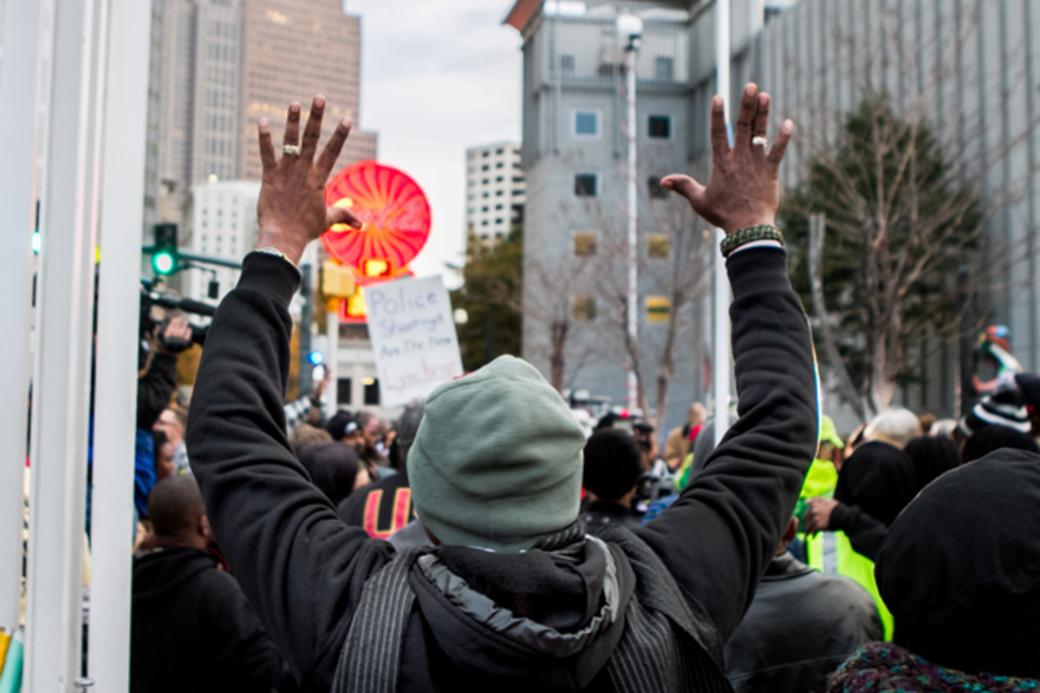 In many ways, the energy that coursed through Downtown was similar to that of the Occupy movement and Trayvon Martin protests in previous years. No leader took charge of the march. The crowd dissipated frequently before again picking up steam. There were arrests, including the detention of journalists. And protesters' endgame might not be readily apparent to some people standing at the edges, watching it pass by.

But there is a goal. Like Occupy, what we saw — and are seeing — is a true expression of deep frustration and fatigue with an unfair system rife with entrenched racism, unfair sentencing laws, and excessive force or profiling by police. These aren't just "Ferguson protests" anymore. Atlanta is a setting for these issues and a place where change can happen.

Nearly 3,000 people descended upon Underground Atlanta the day after the grand jury released its decision. For four hours, demonstrators channeled their outrage with song, dance, speeches, and moments of silence. But halfway through, hundreds of protesters — a few wore masks and lit flares, others held signs and chanted nonviolent messages — began marching past City Hall toward the Downtown Connector, where they blocked northbound traffic for about 20 minutes. By night's end, protesters had walked approximately seven miles. Along the way, the vast majority of participants peacefully exercised their right to protest and upbraid the institutions that have helped build and maintain the unfair criminal justice system.

The officers policing the protesters were mostly civil and respected protesters while maintaining public safety. But the effort to break up the march and the arrest process deserve review. By the end of the night, 26 people, including Creative Loafing freelancer John Ruch, who was covering the event, were facing charges that included disorderly conduct, pedestrian in roadway, and aggravated assault; some waited hours to learn what charges they faced. Relatively little damage was caused during the incident, compared to what transpired in Ferguson, Mo., where a dozen buildings were burned. By contrast, Atlanta police received fewer than a dozen reports of property damage for a protest involving several thousand people.

The case as well as the protests, in Ferguson, in Atlanta, and across the nation, have been polarizing. Ferguson protest critics, especially those who throughout the grand jury proceedings "sided" with Wilson in the court of public opinion, focused on destruction and disorder or pointed back to Brown's behavior. But they missed the larger point of why people are angry in the first place. Though it's Brown's name that is chanted, the outrage over his death has given protesters a chance to vent anger about larger issues, such as police profiling and discrimination. And metro Atlantans should expect to see more of it in the coming months and years. Peaceful marches in the streets are intended to start a dialogue. Policy change needs to come next.

And judging from public sentiment, the change is warranted. On Monday, a poll released by the Hicks Evaluation Group, a local minority-owned polling firm, found that 81 percent of black respondents think the "local police are more likely to use excessive force against a minority than against a white person." Seventeen percent of white respondents agreed.

"Simply put, Black and White voters in Georgia see the police in general and Ferguson specifically in very different ways," pollster Fredrick Hicks said in a statement. "In this survey, it's not about income, gender or even political affiliation. It's about race."

When one segment of the population feels so strongly, the issue must be addressed. On Monday, U.S. Attorney General Eric Holder told a packed Ebenezer Baptist Church that President Obama has requested more than $260 million for local police forces to purchase body cameras. The city is also conducting a pilot program that involves equipping officers with the devices. Such programs could instill some trust.

Atlanta officials like to hearken back to how the city was home to the Civil Rights Movement. Protest and civil disobedience are in our bones. That makes for a nice sound bite. But too often it's not followed up by meaningful action. That action is desperately needed in a city that's home to the highest income inequality in the country, and the heart of a metro region where only 4 percent of children can make it into the upper class.

Atlanta could be a living laboratory for the solutions, big and small, that could start actually addressing decades of injustice and discrimination. Or we could just view the protesters as working off steam and continue to delay a very important conversation. One option gets us somewhere. The other means more injustice.