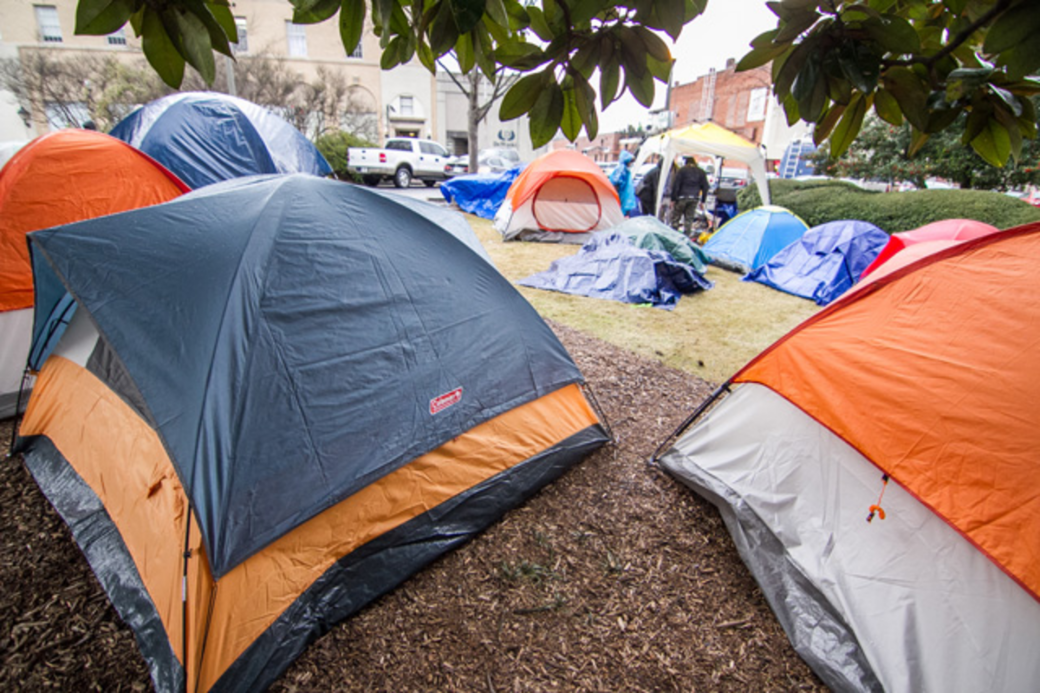 U.S. Air Force veteran Anthony Hill was killed at his Chamblee apartment complex in March 2015 by DeKalb County Police Officer Robert Olsen. The day Olsen shot Hill, the 27-year-old, who had been diagnosed as bipolar, was naked and wandering around his apartment complex knocking on neighbors' doors. He jumped off a balcony. Neighbors called 911. Olsen arrived in response and ultimately shot the unarmed and naked Hill twice in the chest, killing him.

The lethal events that unfolded between Olsen, who is white and had access to a taser, and Hill, who was black, occurred at a time of increased scrutiny nationwide of police interactions with black and minority citizens. In the months following Hill's death, Hill's family, former girlfriend, supporters, and the public waited to see if an indictment would come. In January, a grand jury indicted Olsen on six charges, including two counts of felony murder, one count of aggravated assault, one count of making a false statement, and two counts of violation of oath by a public officer. It is unusual for officers to be indicted — Olsen's is the first indictment of a police officer in Georgia in more than five years.

In an interview published the day before the announcement, Hill's former girlfriend Bridget Anderson told Creative Loafing, "I do have faith that the grand jury will make the right decision in indicting Officer Olsen. However, I am wary that Georgia is the only state that allows a police officer to speak last to a jury without any questioning or cross-examination. I've made it my goal to change that law."

Anderson, who's been advocating for reforms since Hill's death, was referring to an anomaly unique to Georgia's already secretive grand jury process that allows police officers not only to sit in on the process and hear all evidence against them, but also to make final, unchallenged statements to the jury. This provision has the potential to skew the outcome in favor of the defendant and alter the course of justice. As DeKalb District Attorney Robert James noted earlier this month to the Associated Press, that law also allows officers' attorneys to "see the hand that we're holding, but we don't necessarily get an opportunity to see the hand that they're holding."

Defenders of the law say it protects police who must make quick decisions in dangerous circumstances. But granting police special privileges creates a potentially biased process. The law should be changed to disallow unchallenged closing statements by police in order to ensure that decisions to proceed — or not — to trial are made based on evidence, not emotional appeals.

On Feb. 8, a bill was introduced in the legislature that would do just that. House Bill 941 offers a series of changes to the current law with the intention of increasing transparency and accountability. As of press time, the bill proposed limiting officers' time with the jury and permitting cross-examination by the prosecution and juror questioning. The bill would also create a one-year statute of limitations on grand jury reviews and increase the lead time notification officers receive of a hearing by five days.

In 2015, the AJC and Channel 2 published a deep investigation into Georgia's grand jury process. Their reporting found that between 2010-2015 zero prosecutions followed 171 fatal police shootings in Georgia.

It's hard to say definitively how Georgia's law affected that statistic. Some of those shootings might have been justified. But the fact that the privilege exists creates an unfair environment where police officers, who in courts of law are often given the benefit of the doubt, are able to personally plea to a group of people asked to judge cases based on the facts. That should happen during a trial.

Police officers have difficult and often thankless jobs. But that alone should not grant them leniency in the judicial system with special privileges. The goal is not to indict more police officers just to indict them. It's to make sure people are being held accountable for their actions, especially when their decisions result in taking a person's life.