Opinion - The House (and Senate) of God

My daily dose of forced religion, courtesy of the state government 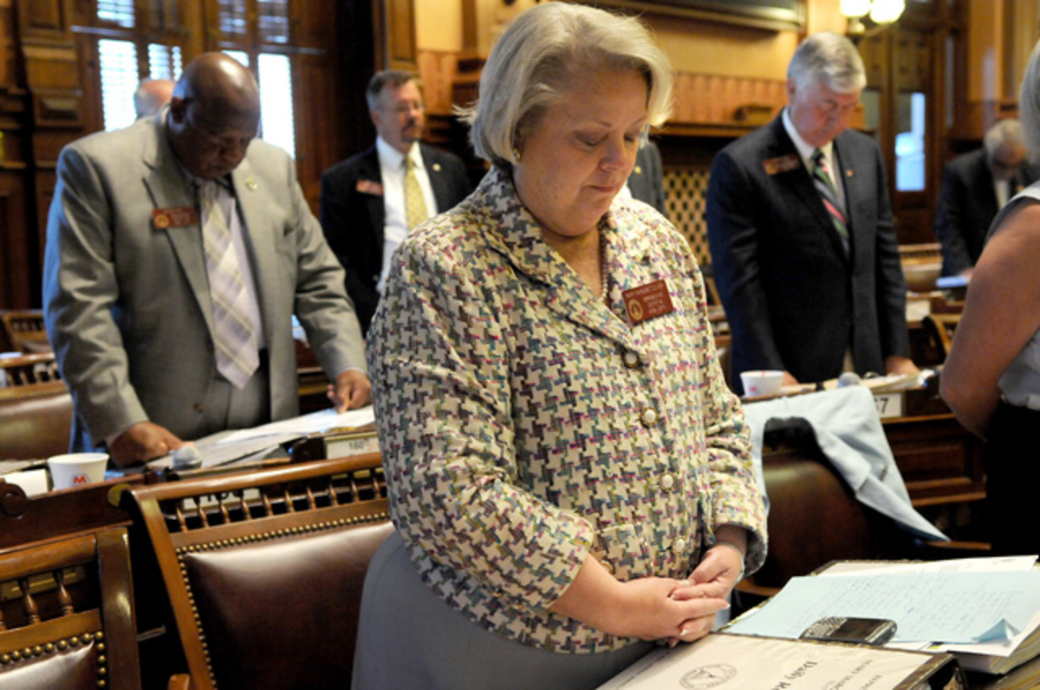 The Georgia State Capitol has become my church.

I don't mean to say that I'm a devotee of the political process (though I am) or that I find the procedure and oratory to be particularly moving (it rarely is). I mean it quite literally. The Georgia State Capitol is where I find myself learning about the life, deeds, and words of Jesus and the Christian idea of God — and being preached to. Not willingly, of course. I'm Jewish and not so much into the whole Jesus-as-Lord thing, but it happens nonetheless.

Before nearly every committee meeting there's a devotional. In every meeting I've participated in or watched, which is a decent number, the devotional ends with a prayer in Jesus' name.

Every morning during the legislative session, the House and the Senate chambers have a Chaplain of the Day. Legislators can sign up to bring their pastor or clergy member of choice to preach from the well. While they preach, the doors to the chamber are locked and everyone is prohibited from leaving. People are literally forced to sit through the morning's preaching and prayers. These aren't all generic, multi-denominational prayers. Sometimes they're fire-and-brimstone, fundamentalist tent-revival speeches intended to scare legislators and onlookers into turning (back) to Jesus.

On Feb. 22, the Chaplain of the Day was Mike Howard, the pastor of Glennville First Baptist Church, located outside of Savannah. In his sermon, Howard bemoaned the nation having "moved away from God" by removing prayer from public schools and "vestiges of the Ten Commandments from government buildings." Howard said the country has "openly devalued human life, lowered God's moral standards, redefined His definition of marriage, and we've openly espoused behaviors that He considers to be abomination." To top it off, Howard said, the country has "been overly accepting and tolerant of other religious faiths, and increasingly intolerant of Christians and Christianity."

Almost all of that is typical rhetoric for the Capitol, but it was that last line that threw me: "We're overly accepting and tolerant of other religious faiths." Speaking before a body that's intended to represent all Georgians, a Christian pastor told our state that every religion that wasn't his is wrong, and nobody batted an eye. There's been no backlash, no outrage, and barely any commentary, because this kind of thing happens every day in our state Capitol. When I said that the Capitol has become my church, I wasn't joking.

I get that we're never going to separate religion from politics in Georgia. I know where we live; I was born here and I've spent almost my entire life here. Perhaps this has all been amplified by the recent fights over so-called "religious freedom" laws, but between the daily prayers in Jesus' name and those bills, it's become clear that the Legislature isn't fighting for religious freedom, it's fighting to keep Christian supremacy. When the Christian Bible is used as the basis for laws and Jesus' name is declared the One True Savior, it's impossible to infer anything else. And it really sucks for the rest of us.

For more than 200 years, Christianity was the de facto state religion and governing system. Fundamentalist Christianity was used to justify everything — slavery, prohibition, segregation, marriage discrimination, and more. And for many years, there wasn't a large enough group of progressive Christians or other faiths to speak up.

Slowly but surely, people have started to speak up, and now the Legislature is running scared. Yes, their fundamentalist beliefs are under attack, but not because it's Christianity. It's because they keep insisting on imposing their religious beliefs on those of other faiths and on non-believers. I'm all for churches and other non-government-funded organizations being allowed to speak and do just about anything they want with almost no restrictions. I'm not OK with our government funding, endorsing, or enforcing it, though.

I shouldn't be forced to sit through a church service every time I want to watch the Legislature in action or testify before a committee. (When I testify, I'm often wearing my kippah, and let me tell you, the looks I get when we start the prayer and I don't respond "amen" or make the sign of the cross? I feel just left out as — if not more than — they want me to feel.)

There aren't official records kept of which religions are represented in the Legislature, though there are two Jewish Georgia lawmakers, and nearly everyone I spoke to assumed all of the other members were Christian. Changing the representation is clearly the best way to change what's going on, but that's not enough, and that won't happen soon enough.

We have to speak up against these attempts to enforce a state religion. People of all faiths, and no faith, need to make their voices heard and make sure their legislators know that we live here, too, and our opinions matter just as much as theirs.

Robbie Medwed is a local LGBT activist and Atlanta native.