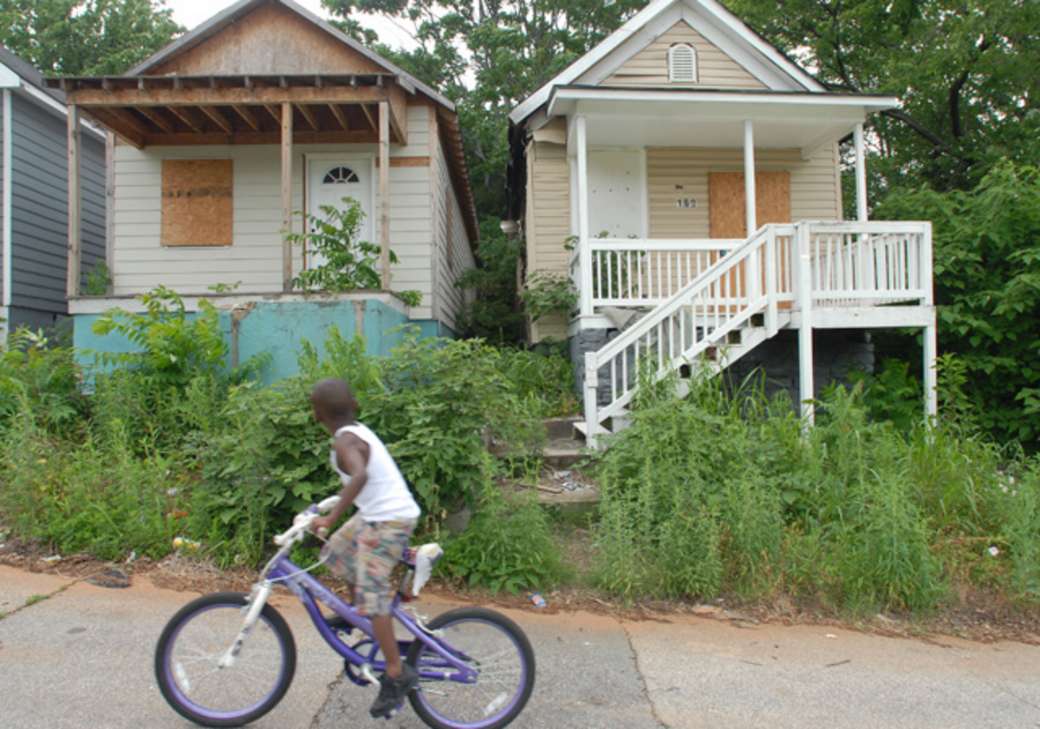 M. Agnes Jones Elementary School in Ashview Heights is a textbook example of a school that is making strides. Inside, the principal has created an environment with a science- and technology-focused curriculum and healthy-eating campaigns. She asks children to consider returning to the community when they are older to be a positive influence instead of leaving. It's the top-performing school in southwest Atlanta's Washington cluster.

But at the end of each school day, the students are faced with a challenge so great that government's efforts and power have been unable to address. As some scholars dash to the bus stop or car pick-up, many students begin their trek home past abandoned houses with broken windows and missing front doors. Some have mattresses inside.

Vacant and dilapidated homes have been a recurring theme in many westside communities. These are neighborhoods that, after dealing with speculators during the housing boom and foreclosures during the Great Recession, are now on the rise. But some are still tackling the complex problem of blight: vacant structures, illegal dumping, and the problems associated with them.

According to a recent unofficial survey by neighborhood residents, there are more than 400 vacant properties in westside communities. Look around for a trash can in some areas and you might be looking for a while.

Code enforcement officials have tried to cite absentee property owners and illegal dumpers. And city programs aimed at securing problem properties have had some success. But drive or walk along some residential streets in westside neighborhoods, and you see Atlanta has more work to do.

Blight is a complex and frustrating problem and causes multiple harmful effects. Vacant homes can become a magnet for criminal activity. Sometimes they can become a shelter for homeless people, which can be particularly dangerous because of a dilapidated house's structural concerns. Sometimes children playing nearby will explore an abandoned house, putting them in contact with strangers, dangerous conditions, or drug paraphernalia. Some neighborhood children enjoy walking barefoot, meaning they could walk right through illegal substances.

Abandoned properties are very high on the list as one of the signs of an area in distress because it shows that property owners couldn't care less about their environment, which is far from the truth. Illegal dumping also stems from blight as it sends the message that the larger area is abandoned and uncared for, therefore there is no one to hold the perpetrator accountable.

On top of all these concerns is the psychological impact a vacant home can have on residents and children who live, study, work, or play nearby. On a recent morning, a brother and sister who were walking to school passed a squatter headed into an abandoned home. They walked past tires, two damp mattresses in the driveway of an abandoned property, and litter. One can only imagine what they are thinking, and how this is fostering their idea of a healthy environment.

There are policy measures the city can implement to address these issues. One would be to give the city code enforcement workers the resources they need to adequately tackle such a substantial issue. A group of southwest Atlanta communities recently voiced their support for allocating additional funding to hire more officers, fund researchers to track down absentee property owners, and buy trash cans in neighborhoods, a minor expense that could reap dividends. Fines should be increased to penalize negligent property ownership.

In addition to an increase in the code enforcement's budget, programs such as Memphis' "Mow to Own" program are worth studying. According to Memphis City Councilman Berlin Boyd, who sponsored the program, residents can register a nearby vacant city- or county-owned property, maintain the lawn, and over time, work toward becoming the owner. Many westside residents already spend their time and resources keeping up vacant properties that belong to someone else.

City officials should also consider amending the current ordinances dealing with abandoned properties. In Atlanta, a property owner can register an abandoned property for just $100. That is problematic when owners of some vacant houses are investors hiding behind LLCs. If we increase the registration fee and fines, especially in areas located near schools, we could see an uptick in structures being boarded up, sold, or renovated.

Tackling blight will take time, resources, and focus. But it can be done. Healthy communities are created by healthy families and residents living in healthy environments. The issue of environmental injustice should be taken seriously. The students of M. Agnes Jones Elementary School should not have to be confronted with such a landscape. Neither should residents.

Elizabeth Whitmore is the vice president of the Ashview Heights Neighborhood Association.