Woodruff Park hosts some of Atlanta's most devout players 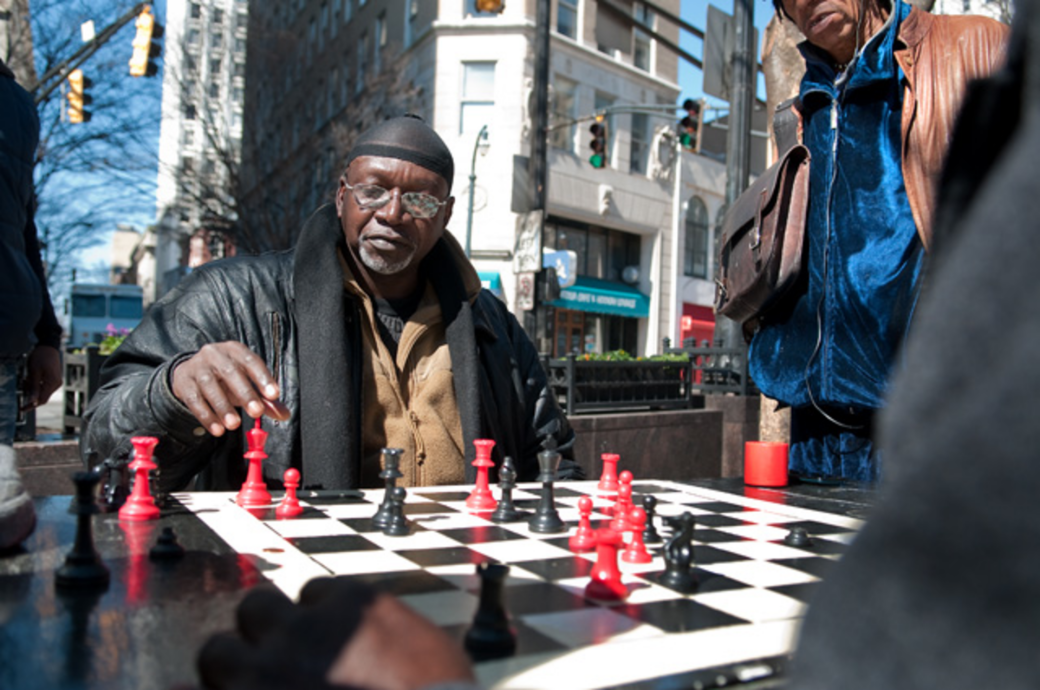 Wedged into the southwest corner of Downtown's Woodruff Park is a small public chess court. Flower boxes surround five picnic tables, each with two painted-on boards, and a gazebo filled with a jumbo grid and pieces the size of children. Though it occupies only a thin slice of the park, this plot hosts a rotating cast of regulars and curious passersby who gather to watch and play every day. This is the hub of some of Atlanta's most devoted chess players.

Fifty-year-old Larry McNeil visits the chess court most afternoons. He sports a salt-and-pepper beard, a pair of wire-framed glasses, a portable speaker (he likes to play Taylor Swift), and a Ziploc bag with his personal plastic pieces. His set is worn from use, with a shiny finger-oil patina and a broken pawn that looks like a wounded soldier. McNeil's set features red pieces instead of the traditional white. These bloodied-looking chessmen have faced many battles under his hand.

McNeil marshals his troops for several games a week, spanning from a few heated minutes to longer than an hour at a time. He calls himself Ayatollah, a nickname that to him means "spiritual leader." But many of his friends and regular opponents refer to him as King Larry, a nod to his skill as well as his courtly manner. He's a tough competitor with a gentle demeanor, often coaching his challengers while he topples their pieces one after the other.

"Check," he says in a calm, low voice after he corners his opponent's king during a recent bout. He's a few steps away from victory, but he doesn't gloat. To a spectator who doesn't know the intricacies of chess, it may not even look like he's winning he's so nonchalant. The men at the next table are screaming about pawns while King Larry silently takes a rook and a bishop, some of the most valuable pieces on the board.

"I used to watch a lot of medieval pictures about knights, kings, queens. I grew up reading those stories," he says. "So when I got a chance to actually play with the pieces and have my own kingdom, it meant a lot to me."

McNeil learned to play chess Downtown six years ago, when he moved to Atlanta from his hometown in Tuskegee, Alabama. He made friends at the park who taught him the moves and the house rules. The players at Woodruff have only a few guidelines: Approach a board and wait for a chance to play — first come, first serve. Don't drink. Don't cause trouble.

"The real game of chess is supposed to be a gentleman's game, and it's supposed to be quiet. But out here in the park, it's a little more animated. I guess you could call it 'guerilla chess,' and it's real aggressive when they talk," he says. Players frequently trade friendly insults, sometimes argue, and occasionally place small bets on the games.

"I'll take that!" shouts one man as he captures a knight, slamming his piece into it and making a loud clicking sound as he takes the square. The moves continue — click, click, click — and so does the taunting. "Oh, you thought you could trick me? Not today!" Meanwhile, at an adjacent game, a player resigns and ruefully admits, "I'm mothafuckin' mated." He gives his opponent a congratulatory fist bump before they set up the next round. At another table, a pair of old buddies puts a dollar on their matches and passes the wrinkly bill back and forth as each one wins, loses, and wins again. 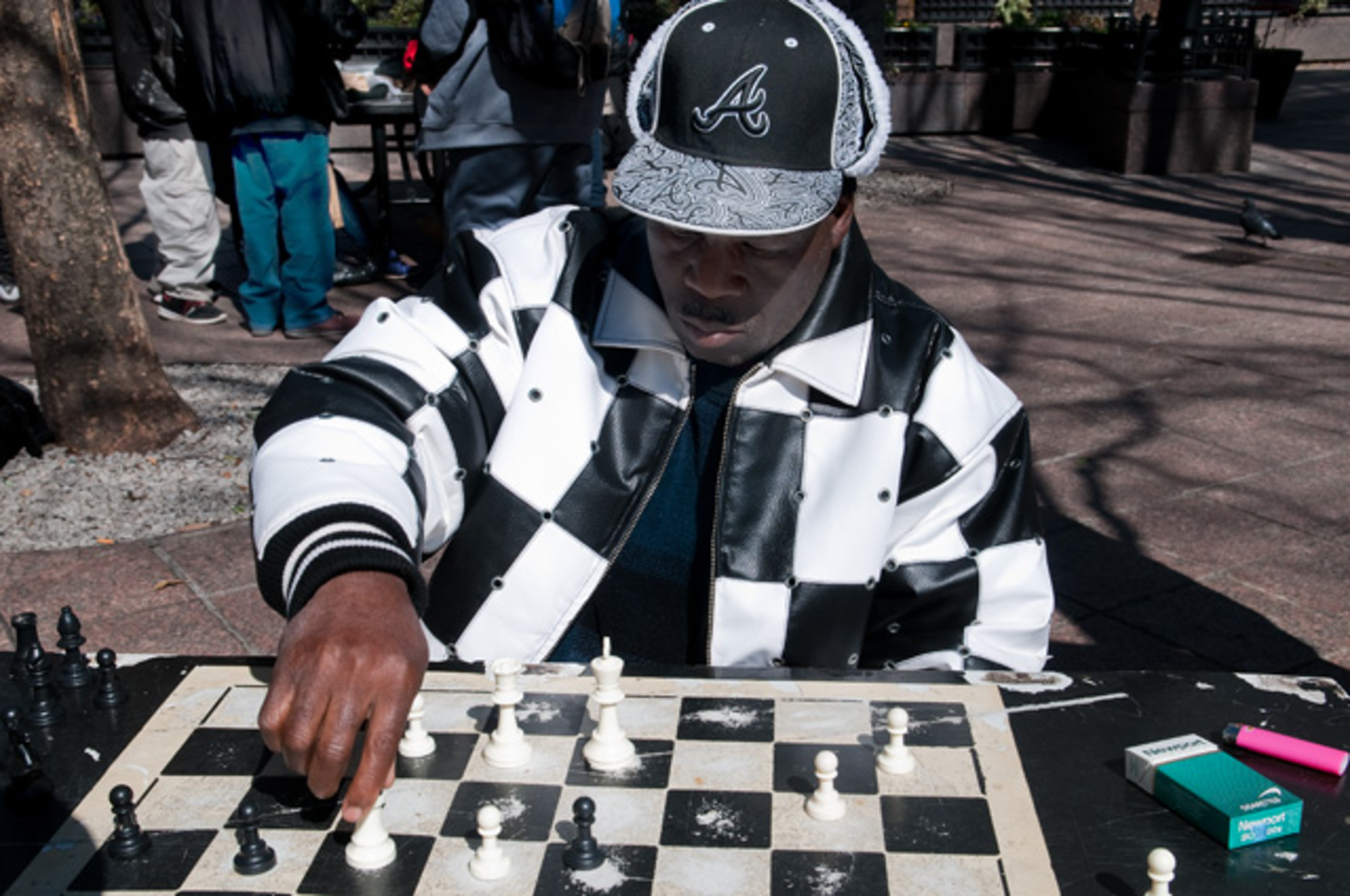 The chess players at Woodruff Park adhere to their own set of rules.
Photo credit: Joeff Davis

At one point, an unfamiliar man stumbles onto the court, smelling of alcohol and disrupting the games. He tries to snatch a piece from one of the boards. A burly player stands up and warns him to leave. The court falls silent; all eyes turn to watch. Before the new guy can bother anyone else, another spectator takes him by the arm and leads him across the street to Arby's for a meal.


The city has a much longer set of rules the players are required to follow. A large sign inside the court lays out all the regulations, including no smoking, no littering, and no eating. The area is meant for chess only, and no more than four people should be seated at each table. Loitering is discouraged. Technically, gambling isn't allowed either.

The police department observes the park through a surveillance camera, and park attendants zoom through on Segways. A Clean Team member is also on hand at all times to keep the area trash-free. The entire court is pressure washed twice a day — before it opens in the morning and after it closes at 11 p.m. Each night, the staff puts away the giant pieces from the novelty board in the gazebo and installs a barricade around the court.

Few visitors realize how much effort goes into maintaining the space, says David Wardell, Vice President of Operations and Public Safety at Atlanta Downtown Improvement District, which oversees the park. ADID took over the chess court in 2008 with the help of Dan Biederman. Biederman renovated New York City's iconic Bryant Park, a chess hot spot where it's not uncommon to see renowned masters offering lessons to novices or taking challenges from aspiring champions. ADID and Biederman want Woodruff Park's chess program to be equally successful. 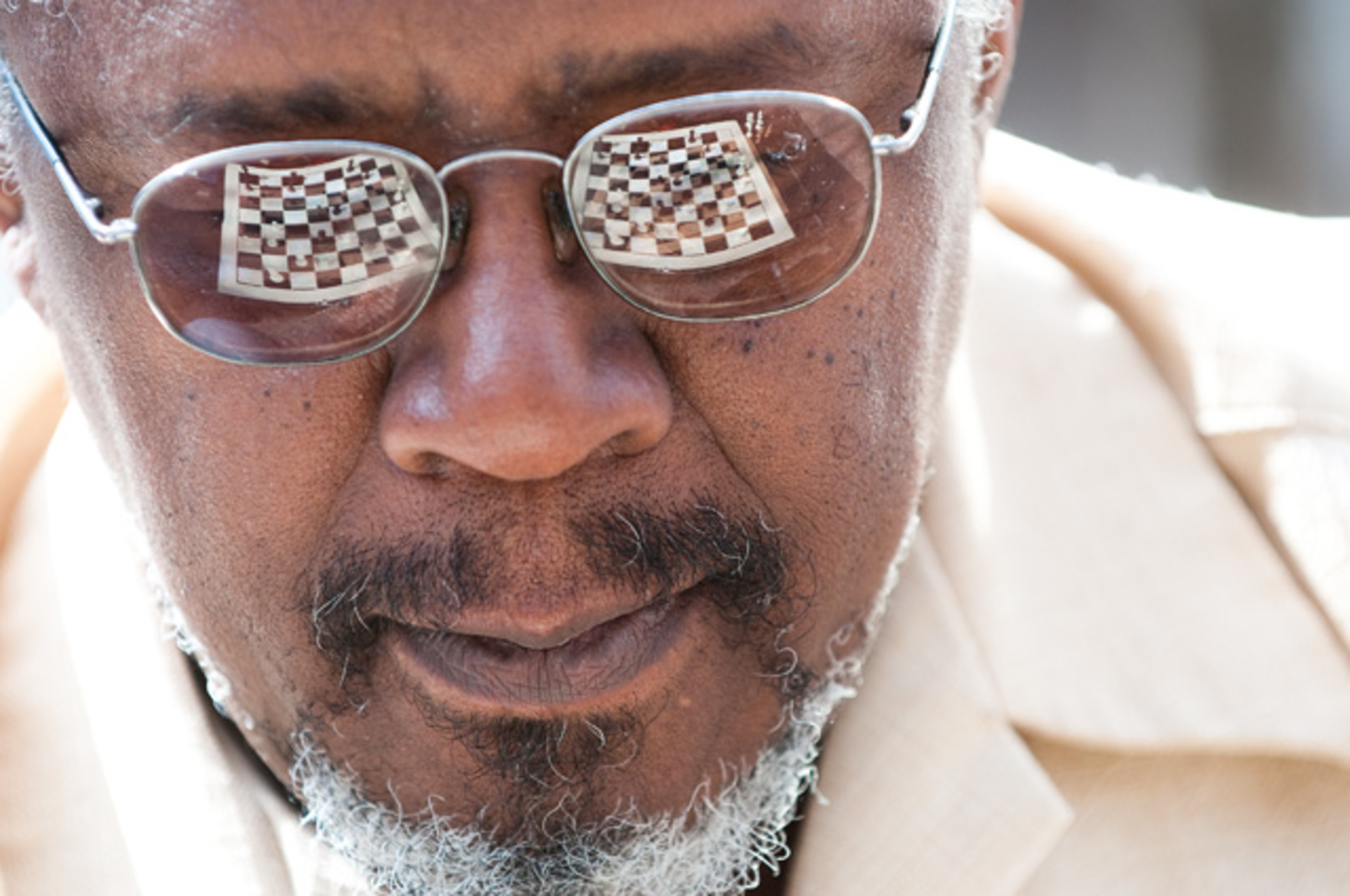 Michael Miles concentrates on his next move. "I've been playing chess for 45 years," "If you can play chess you ca do anything in the world."
Photo credit: Joeff Davis


It's true, the roster of players at Woodruff Park seems like it's always the same: older males, with few exceptions. Flocks of college kids and young workers hurry past the busy intersection, looking like a time-lapse blur speeding by the men musing over their boards. What would it take to get the crowds to stop and stay for a while?

The Georgia Chess Association is working to arrange a summer tournament at Woodruff Park. It would have a low entry fee, around $10, and anyone could join. An event of this kind could bring in hundreds of participants, plus their families. GCA is also interested in partnering with a program such as Soccer in the Streets to coordinate a summer camp teaching students how to play chess. The club would pop up in the park for a few hours, engage the community, and ideally transform it into more of a destination.

What happens when a nine-year-old chess enthusiast takes on a regular at Woodruff Park? We followed along to find out.

Where else to meet fellow chess fans in Atlanta
Woodruff Park isn’t the only place to find chess nerds in Atlanta. Here are the city’s best bets for boozy late-night games, kid-friendly lessons, and more in between.

Drunk Chess, hosted by Volta Laboratory Social Club
The first Monday night of every month, “the pawns get queened and the queens get forked” at Joystick Gamebar in East Atlanta Village. The event organizers put out a handful of boards in the back room, and the rest is up to the guests. Drinking and mingling are encouraged. Players of any skill level can join up for a match or two, or just watch between rounds of arcade games. 427 Edgewood Ave. S.E. www.facebook.com/thevoltalab.

Georgia Chess Association
The Georgia Chess Association is serious business. Its calendar is chock-full of championships, tournaments, and meet-ups around the state. Many of the events are geared toward experienced players with official ratings, but some of them — like the recent Bughouse Tournament at Iron Yard in Downtown — are open to all levels. www.georgiachess.org.