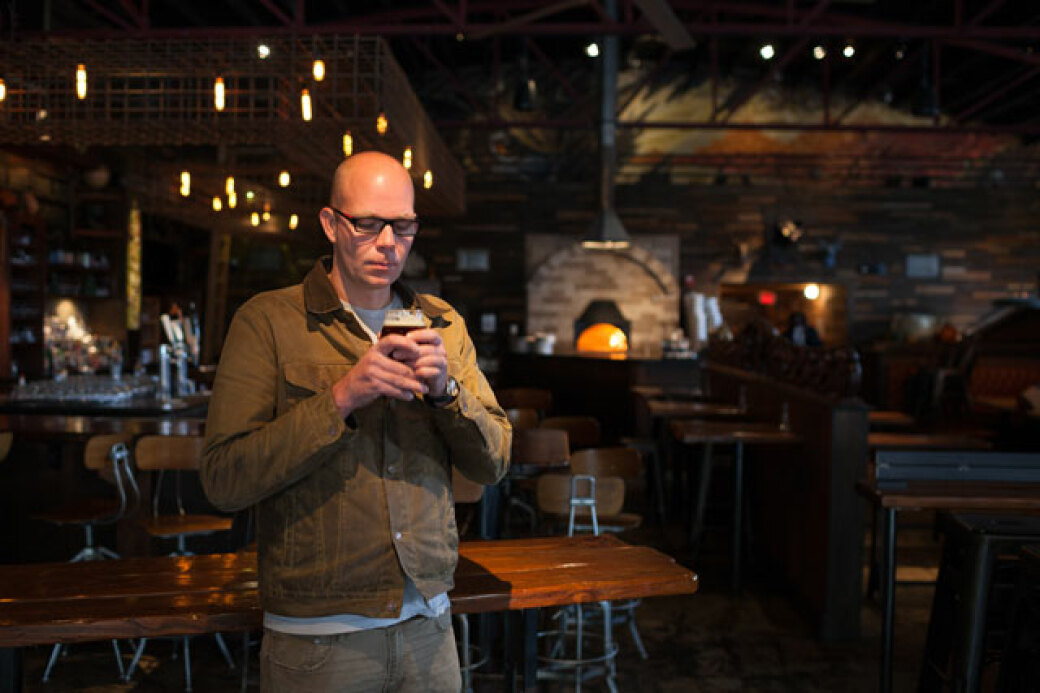 "We were going to have beer no matter what we did," Donald Durant says. "I wanted as many taps as I could get." He's sitting in front of 32 of them as he says this. The bar at Argosy, the East Atlanta Village establishment he, Armando Celentano, and MJQ owner Ben Rhoades opened in March 2013 is a great one. Alongside places like Octopus Bar, Midway Pub, and Holy Taco, Argosy has helped turn East Atlanta Village into a food and drink destination in recent years.

Following art school in Savannah, Durant moved to Atlanta in 1996, looking for a more robust art and music scene. He played in a number of bands, including Rizzudo, which he formed in 2000 with his two brothers. In 2005, Rizzudo ceased touring. "Everybody owned a house by that point," Durant says. "People getting married, things like that."

They kept playing once or twice a year until their final show this past September. With the band slowing down in the mid-'00s, Durant was paying the bills with bar and restaurant jobs. He worked his way up the ranks at MJQ, helping to improve the venue and book shows. Eventually, he helped open Drunken Unicorn. Rizzudo played the venue's first show.

Durant, now 41, met Celentano at MJQ. Along with Rhoades, the trio came up with the idea of Argosy, a gastropub-style restaurant that filled a slightly more upscale niche that EAV was lacking. Creative Loafing spoke with Durant at his bar to find out how he became interested in beer and what he hopes for the future.

Probably sneaking a sip of Miller Lite from my uncle. My first beer was probably a Jack and a Budweiser at a family party. I discovered craft beer in high school, and I think Anchor Steam was my first beer like that. Later, I worked at a place in Savannah called the Mill with homebrew supplies and draft beer. That was my first exposure.

How did Argosy come about?

We had been doing a club environment for so long, but our tastes were changing. Over the years, all our friends who were always there quit coming to see us at MJQ. Once none of our friends were coming to hang out with us, mostly because of age, that's when we were ready to do what we did. We just needed a space with four walls that we could build out. The ceilings of the previous tenant were maybe nine and a half or 10 feet, and there were two layers of drop ceiling. What sold us on this space was that we crawled up into the attic and saw the barrel ceiling. That sealed the deal.

Going in, what was your plan for the beer program?

I did not realize how tough it would be to keep things on. I'm cool with that, but I still want to keep solid, regular beers on. I'd never want to be Taco Mac level. We have 32, and that's a good area to establish yourself as a craft beer bar. I don't blow up social media when I put something special on. I like to have people walk in and go, "Holy shit!"

What are the challenges that come with running a great beer program?

It's really never a problem to have good things on, especially as better and better things keep coming out. But the problem is that breweries that were used to a lot of attention from me in my first year are asking why their numbers are down. Orpheus came out this year, Creature Comforts came out this year. A lot of things have come in this year! A lot of these decisions are based personally on what I want to drink.

What would like to see change in Georgia's beer scene?

I'd like for us to be able to compete with the states touching us. I think being able to go to a brewery and take home a growler? That'd be cool. To be able to buy bottles that only a brewery released? That's fun. It gets people more involved. If residents can get more involved with a brewery, they develop a new respect for it. I went to the Mexican Cake release at South Carolina's Westbrook Brewing at 6:45 a.m. with 300 people, and they weren't releasing the bottles until 9 a.m. That's, like, $150,000 in one day for a small business without even accounting for all the crazy stuff they were serving in the taproom. Those kind of laws make it so that any struggling brewery has a chance to do creative releases that cause a buzz and pay their bills. And also bring people from other states to get them. I would love to see that. Georgia brewers aren't given the opportunity to do stuff like that.