There's a mix of cautious optimism and guarded skepticism every time a new barbecue spot comes to town: Will it be the real deal or a wannabe looking to cash in on barbecue's unwavering popularity? But OTP-ers are already familiar with the award-winning 'cue at Grand Champion BBQ's Roswell and Milton locations. GC's intown expansion is located inside Krog Street Market.

GC's counter may look stripped-down when compared to its showier neighbors, but the streamlined wood-and-rust-colored-metal decor proves that old-timey bric-a-brac and a dusty assortment of pig statuettes isn't a prerequisite for solid 'cue. GC has four meats to choose from: pulled pork, beef brisket, smoked sausage, and baby back ribs. The first three are available as sandwiches; all are also sold by weight rather than as a component build-your-own plates commonly seen elsewhere. The staff can help with the math, but generally speaking, figure a half-pound of meat (about $7-$8, depending on what you choose) per person, maybe more if you're going light on sides. Rib lovers should appreciate the by-the-pound approach, because not all racks are created equal. If your half-slab looks a little sparse, just request another bone or two.

Gentle smokiness is the theme at GC. This is particularly true for the pulled pork ($14 per pound) and brisket ($16 per pound). A pile of the pork comes with a nice mix of bark and moist shreds, and the brisket is fall-apart-tender. The baby back ribs ($12 per pound) are GC's claim to fame. Smoked over hickory every morning in an on-site Southern Pride smoking cabinet, each slab is wrapped and held in a warming unit until you order. The smell of hickory fills the air as you tug the succulent pink meat from the bones. Like all of GC's meats, the ribs are served dry; but they shine brightest with no sauce at all. They're among the city's best.

GC's superb smoked sausage ($14 per pound) is sliced into thick chunks. Aficionados will enjoy the casing's unmistakable snap. A pile of these sausage slices makes a tasty accompaniment to any order, perfect for dipping in GC's sweet original sauce or the North Carolina-style red vinegar sauce.


Thanks to a bare-bones kitchen and the food court footprint, sides are somewhat limited. The mac and cheese ($4-$12), made with chewy rigatoni noodles, has a rich Gouda kick and shows a direct link to the legendary Sam Huff's BBQ-1 lineage. Desserts include a rotating lineup of homemade pies ($5) and banana pudding ($3.50-$5.50).

The grab-and-go food court format is also evident in GC's lack of soda fountain service; soft drinks (and water) are served in bottles. If you order tea to drink with your 'cue, you're buying a half-gallon jug and a Styrofoam cup. Feels weird if you're dining alone, but it's just $2, and you'll have plenty to take home. (Maybe that just encourages ordering enough 'cue for leftovers to go with?)

What's the bottom line? GC's ribs are stellar. The rest of the menu offerings are above average, but like almost everything at Krog Street they feel slightly overpriced. The prices, however, are comparable to ones at other barbecue spots in town, such as nearby Fox Bros. Bar-B-Q. Lunching alone, you can blow through $20 without blinking. But GC's pay-by-the-pound strategy is convenient if you're trying to feed an entire office or family.

“The Winningest Woman in Barbecue” shares secrets from the competition circuit for scoring high marks with your own backyard grilling this fall | more...

Smoked meats are the name of the game at this four-month-old restaurant in the Luckie-Marietta District Downtown | more... 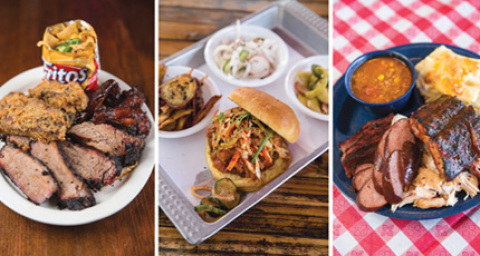