Ever long for the time before small plates and fast-casual dominated dinner? When meals commenced with a well-stirred martini? Where timeless classics were backlit by dignified ambiance? The Mercury in Ponce City Market resurrects that retro-modern 1960s sensibility. From the team behind the Pinewood in Decatur — chef Mike Blydenstein, Brooks Cloud, and Julian Goglia — the two-month-old restaurant is a cocktail-focused stunner drawing design inspiration from yesteryear.

The Mercury's loungey, throwback-chic dining room is located on PCM's second floor. Lighting gently reflects over dark and sultry wood furniture and the leather banquettes and bar chairs covered in turquoise replica seat covers from the sporty 1960s Mercury coupe. The space is broken into a 200-seat main dining room with wispy white curtains, a dedicated lounge with low mid-century modern chairs, and the anchor — an enormous 35-seat bar. Its shiny marble top glistens under dangling glass orbs and highlights the sparkle of cut glass filled with boozy cocktails.

The overall cozy ambiance is complemented by familiar flavors elevated with contemporary technique. The offerings are pretty straightforward continental fare: appetizers, soups and salads, raw bar items, mains, and sides, most of it available at both lunch and dinner.

One night at the bar, the Monkees came on, bringing to mind space chimps Ham and Sam who flew in the namesake Mercury capsule. Space-age motifs abound. "I came here because the cocktail menu has the drinks I see in old movies and I want to try them," said a nearby man drinking a classic Aviation. The drinks on the list are definitely inspired by those dreamy desk-side Scotch cabinets of yore. The Ode to Viceroy ($13), for example, is a smoldering mixture of Scotch, lime, ginger, and spicy Falernum over rocks. The glassware is elegant and the bartenders are well-trained by Goglia.

Dinner began with a half-dozen, freshly shucked East Coast oysters ($18). Sweet and flaky stone crab claws can be ordered individually ($18). The simple shrimp cocktail ($14) with plump Gulf shrimp and house-made cocktail sauce is a timeless crowd-pleaser. We also spotted an impressive seafood tower ($129) make its way through the dining room plied with a dozen oysters, shrimp, the daily crudo, and three crab claws.

Other starters include crab ($15) or lobster ($12) balls, both of which are tasty and good for sharing. The Mercury's steak tartare ($14) is a rough chop of Wagyu beef seasoned with Dijon, chives, lemon, and shallots and topped with a fried egg. There are four salads ($10-$16) — an old-school wedge, a Caesar, a simple house version, and a crab Louie. 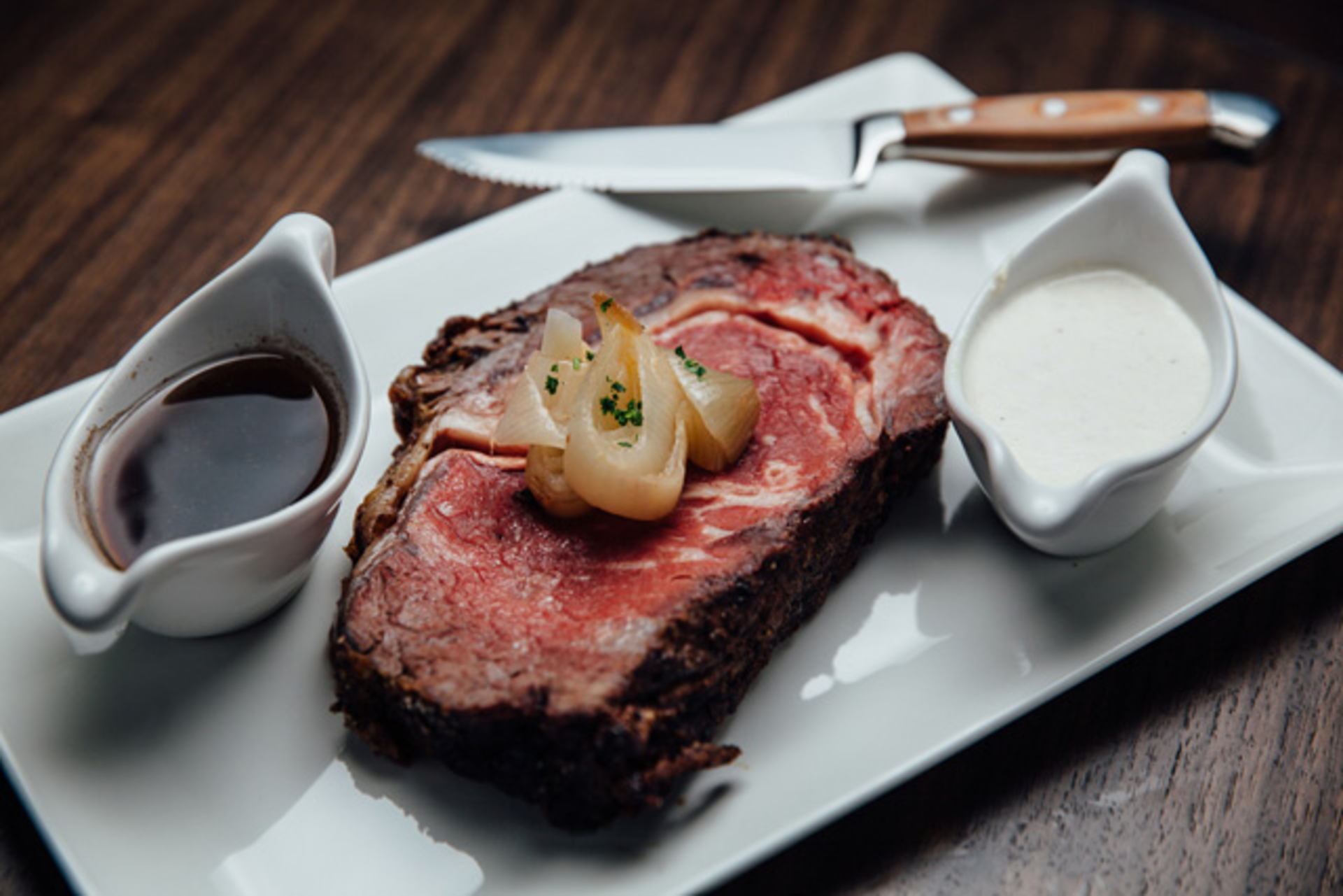 The tender thyme- and lemon-roasted chicken ($26) entrée had textbook crisp, bronze skin and came with creamy potatoes, roasted veggies, and a homey mushroom jus. Other entrées are similarly commendable but this is the place to order steak. In true steakhouse fashion, the a la carte meats are a little pricey and sides ($8-$9) are extra. There are eight little pots of sauces to choose from. Prime rib ($30-$49) comes in 10-ounce, 14-ounce, and 18-ounce cuts. Julian's cut (10 ounces, $30) is a glorious slab of rosy, marbled meat not roasted but instead sous vided (vacuum-sealed and cooked in a water bath). Add a poached lobster tail to Julian's cut for an additional $29. The 6-ounce sous vide then seared filet ($32) is marvelous and melts in your mouth.

As for sides, the pommes galette is a tiny tower of potato slivered into discs with golden brown and crisped edges. The baby carrots are roasted and served with a swath of carrot top pesto. The signature Brussels sprouts (among the appetizers) carried over from the Pinewood also work well as a side.

During the day there is a prime rib sandwich ($19) that comes on a French roll with horseradish cream and sautéed onion. It's like a decadent version of a cheese steak and word on the street is PCM workers clamor for it. The Pinewood's double-patty cheeseburger ($16) with its sexy sear and thick slab of bacon on top is also available at the Mercury during lunch.

In addition to the impressive cocktail menu, there are some tableside preparations that serve four people ($60). This is a fun way to share martinis. There are 12 beers with a few locals on tap. The wine list is composed of about 30 old and new world wines and four bubbles with a few interesting and affordable bottles.

Desserts ($8) are — surprise, surprise — classic: cheesecake, chocolate mousse, carrot cake, and a hot fudge sundae. The mini vanilla birthday cake ($14) covered in chocolate frosting and rainbow sprinkles is where it's at, though. It comes topped with what looks like a Roman candle that sends a jet of white sparkles a foot and a half in the air. It's big enough to share with a few friends.

Atmosphere is a big reason people go to certain restaurants. The old-fashioned food lineup and glamorous, mid-century design give the Mercury an inviting, swanky, time machine quality. It's the kind of place you don't necessarily need to dress up for, but it makes you want to.