[Dialogue] Does Atlanta have a lack of 'decent, go-getting' dudes?

I've only been in Atlanta for two years, so it's a completely naive blanketed statement for me to say, but it seems like there is a major lack of go-getting inspiring guys. I have high standards and maybe that's going to screw me over in my 20's, but I know it's the right thing because I've spent quality time marinating on self love. I feel kinda hopeless (but I know it's a temporary thirsty-for-a-summer-fling thing), but there should be more decent dudes.

All the good ladies are single or married... W T F GIIIIIIVVVEEEEEEEEEEEESSSSS

Back in December, the Daily Beast made a list of the "Best Cities to Find a Date in 2012." The results were mainly based on three components: Percentage of available singles, dating costs, and mental and physical health. They also factored in Google Trends to measure the popularity of five major dating websites and what cities ranked highest among those sites. The result? Atlanta was named the number one city to find a date in 2012. When I read about the results, I found myself laughing out loud and rolling my eyes. Riiiiight, I thought.

I've lived in Atlanta over eight years now, half of which was spent in a long term relationship, the other half for which I've been single and spent my time and efforts somewhere between dating, celibacy, general reckless abandonment, and pure, unadulterated lust. Here's what I've learned in those four years of being single in ATL: I'm not ready ... and I'm guessing neither are you.

Sure, percentage of available singles, cost of living, and mental and emotional health certainly play a factor when it comes to dating. If a date/hangout session can easily run $60 for two here in an affordable ATL, I can't even begin to fathom what dating in a city like New York City or San Francisco must be like. But there's so much more to dating than cost or percentage of singles.

I cant' tell you how many times my friends and family have told me a guy I'm seeing isn't "good enough," and my response is always the same, "We're just hanging out. It's not like I'm going to marry the guy." It's important to have standards, certainly, and I couldn't agree more, but unfortunately, we don't know just how compatible we are with a person until we date them and get to know them better, at which point we may realize that, while this person is fun and exciting and has a lot of the qualities we look for in a partner, they aren't the right fit for us.

When it comes to whether or not Atlanta has a "major lack of go-getting, inspiring guys," I know I'm going to come under fire for agreeing with your statement. Where are these men?! is something I ask myself all the time. The conclusion I've reached is not that these men don't exist (OK, I do admittedly think this sometimes), it's that I don't want them in my life right now. Personally speaking, when it comes to relationships, I give it my all. I am not a serial monogamist. I don't mind being alone. My goals since a very young age are placed on my career and personal ambitions, and, while I'm not saying it's impossible to do while with a partner, being in a relationship means being a little less selfish and a little more selfless, things of which I am not ready to do now.

You say you've been spending quality time marinating on self love, and, while I know how lonely it can be at times (trust), it sounds like this is what you need work on right now.

I can't wholeheartedly say whether or not Atlanta has a greater plethora of outstanding ladies getting shit done versus men, as I know I belong and interact within a specific community in Atlanta, and I imagine in other pockets — say, Midtown or Virginia-Highland — it may be completely different. There are days where I've told myself I'm going to step outside my comfort zone and go to places where maybe every male I meet isn't a server/artist, but then when I get there and that handsome doctor with his long-sleeved shirt tucked into his ironed khaki's opens his mouth, my brain begins to tune out. (Boring.) But that's my deal, and says a lot about the men I pick. I say this, because I imagine if you were to meet a man like this, chances are you may also not be interested in this particular type of fellow. You want the server/artist after he drops the server gig and can make it alone on his art (of any medium).

I think Atlanta does have ambitious men, but perhaps some of them are not at their final destination yet, much like we haven't reached ours. There are some great, talented, ambitious men I've met in Atlanta, in particular over the last two years, but, these men, much like ourselves, are currently working on themselves and their projects and goals. I think, when people's plates are full, it's harder to look for a partner, because that is not a person's goal.

My only advice and consolation, V E N U S, although you may not want to hear it, nor like what I have to say, is that it's a combination of factors: Who we are attracted to, what we want for ourselves, what others want for themselves. Atlanta might be the number one city for singles in the U.S. according to the Daily Beast, and that works to our advantage to hear that we're a city of happy people with a higher quality of living, but maybe what that means for us singles is that we can have fun and explore ourselves and what we want in a partner without it costing us as much time or happiness. You're young. Love does not exist on a timeline. Do not rush what is meant to be and you have no control over. Go on dates. Keep your standards high, but give the underdog a chance. You might be surprised. But whatever you end up coming across, what matters most is that you not give up hope and that you continue to work on yourself and your own goals, because even if you found that person, the only person that is guaranteed to stick with you forever is yourself. Good luck! 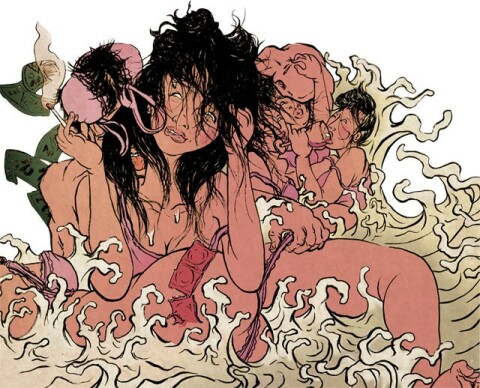 'I'm not going to have sex with you' Article

Don't call it a sundae Article