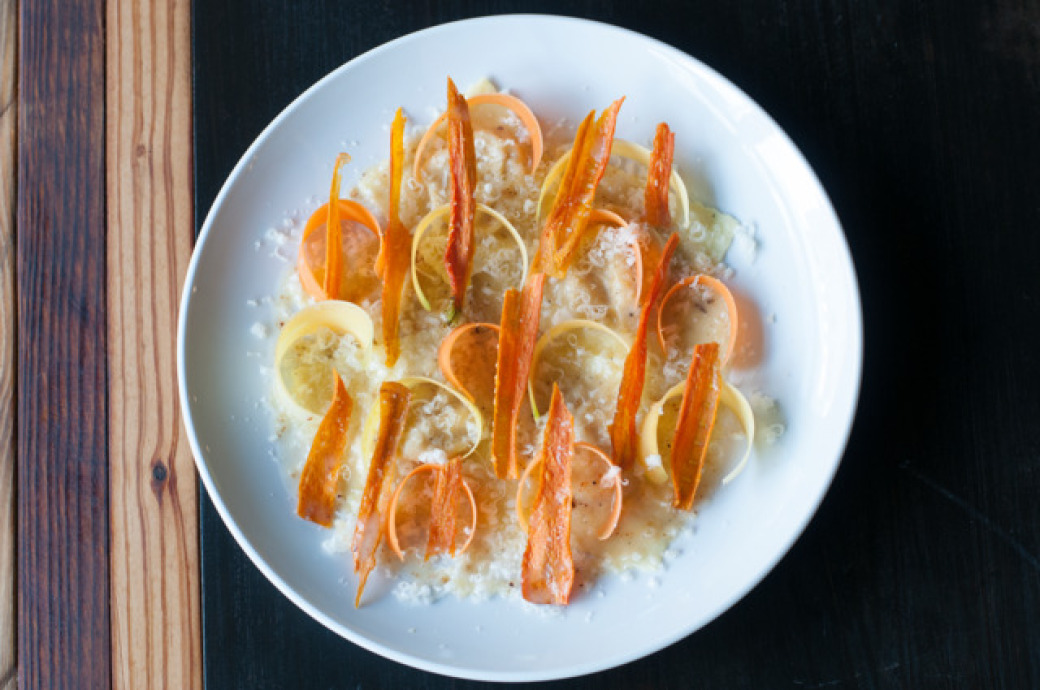 A Mano means "by hand" in Italian. And at the two-month-old Old Fourth Ward eatery named for the phrase, "by hand" is the guiding principle. With a menu that features seasonally inspired dishes from both the north and south ends of the boot, A Mano seeks to serve as the neighborhood's go-to cozy Italian bistro.

Tucked into the corner of Glen Iris Drive and Ralph McGill Boulevard, the former "Lantern House" (aka, lantern-making headquarters for the Beltline's annual Lantern Parade) has transformed into an intimate, upscale restaurant. The industrial style is simple and clean, but feels like it's been around a long time. Reclaimed wood throughout the dining rooms lends an atmosphere simultaneously casual and romantic. The intricate handmade bar, also made out of wood reclaimed from the original house's exterior, is reminiscent of an Italian grotto as it curves around windows for added seating.

Owner George DeMeglio, a host in perpetual motion, be-bops around the dining room. He adores the handcrafted lighting dangling throughout the space: electric, suffused with a happy roar. On a midweek evening, reservations were full but with luck we scored a few seats at the bar. A tall friend and a short friend happily found their perfect dining heights thanks to stools that swivel up and down. A Mano also has seating on the porch with pups allowed. Wooden benches on the lawn are ideal for drinking glasses of wine on those soon-to-come cool fall evenings.

INTO THE WOODS: Reclaimed wood throughout the dining rooms lends to A Mano's casual yet romantic atmosphere. | Joeff Davis

Chef Chandler Cottingham dishes up a coherent menu of robust and attractive standbys. After cutting his chops at Muss and Turner's, Venkman's and Hampton + Hudson, Cottingham traveled for two weeks in Italy and staged at Inman Park's BoccaLupo, building on his pasta expertise. Everything you need to know about A Mano is in a forkful of his carrot ricotta ravioli: a savory m̩lange of hand-rolled pasta pillows filled with roasted carrot and ricotta in a lush brown sage butter sauce with curls of crisp carrot and Parmesan flecks. The complex dish comes across as effortless and endlessly comforting while still feeling light.

Starters are another high point here and a meal could easily be made with a couple. Cottingham massages, brines, sous vides, then grills octopus tentacles for a super tender, smoke-imbued dish paired with caramelized fennel potato salad. In his beef tartare, eye of round is minced with shallots, capers, truffle bits, herbs and smoked salt with a farm egg yolk ready to be pierced and mixed. We used both the crusty focaccia and large discs of watermelon radish as vehicles to our mouths. A sweet and savory raisin agrodolce elevates the humble cruciferae in a roasty plate of cauliflower with puffed rice and lemon. It's different, but just as addictive as Bruce Logue's fried Roman cauliflower at BoccaLupo.


Cottingham uses moderation in the best way. Just enough of the brown butter sage drizzle in the aforementioned ravioli. Just enough bolognese and carbonara to allow the fresh-made al dente pasta's eggy flavor to star. A mound of cacio e pepe is the perfect size to savor before a secundi. A dune of pecorino-covered spaghetti has a great textural bite and is sufficiently peppered. For those non-gluten folks jonesing for a slurp, gluten-free fettuccine may be substituted for pastas.

Get to the meat of the meal with secudi offerings. Flank steak with a seared exterior comes sliced with a charred half lemon, peppery arugula and blistered shishitos with balsamic. Veggie composition showcases A Mano's relationship with local farms like Woodland Gardens and Love is Love: a swoosh of smoked fairytale eggplant puree, grilled summer squashes, sweet peppers, heirloom tomatoes and radish slivers. Savory summer on a colorful plate. Southern meets Italian in a version of fish and grits with Georgia mountain trout crispy skin on, of course over a plump polenta cake with textured swirls of tomato, fried capers, fennel and basil oil.

Missing from the menu are salads, but honestly, with the rustic, concise and veggie-forward dishes that are offered, we probably wouldn't have ordered one.

Dessert was a choice of panna cotta with peach preserves or an ice cream sandwich of Amaretto cookies packed with coffee gelato from local purveyor, Honeysuckle Gelato. We watched as our seatmates enjoyed theirs (they moaned over the cookies) and ordered a flight of amaro instead. With more than a dozen to choose from, a choice of three is just $10.

The beverage program is strong in classic cocktails with Italian influence. A Mano's Old Fashioned becomes a rich, herbal twist with the addition of Amaro Nonino. The wine list of about 30 bottles sticks mainly to the map of Italy lots of Barolo and comfy Chianti. Four wines are on tap along with nine beers, more than half of them local.

With the restaurant's proximity to BoccaLupo, comparison is only natural. Is A Mano as skillfully nuanced and extraordinarily surprising as BoccaLupo? No. But is it a charming neighborhood bistro also worthy as a destination? Absolutely, and the same level of customer loyalty is predicted.

A Mano walks the line, dignified enough for a celebration and kick-back cozy enough for a regular-day round of apps and drinks. It's a place where pasta isn't just a vehicle for getting sauce to your mouth, but just as important as the seasonal and locally sourced ingredients that come with it. It's the kind of restaurant every neighborhood should have, and one that I would gladly leave my own neighborhood to visit.