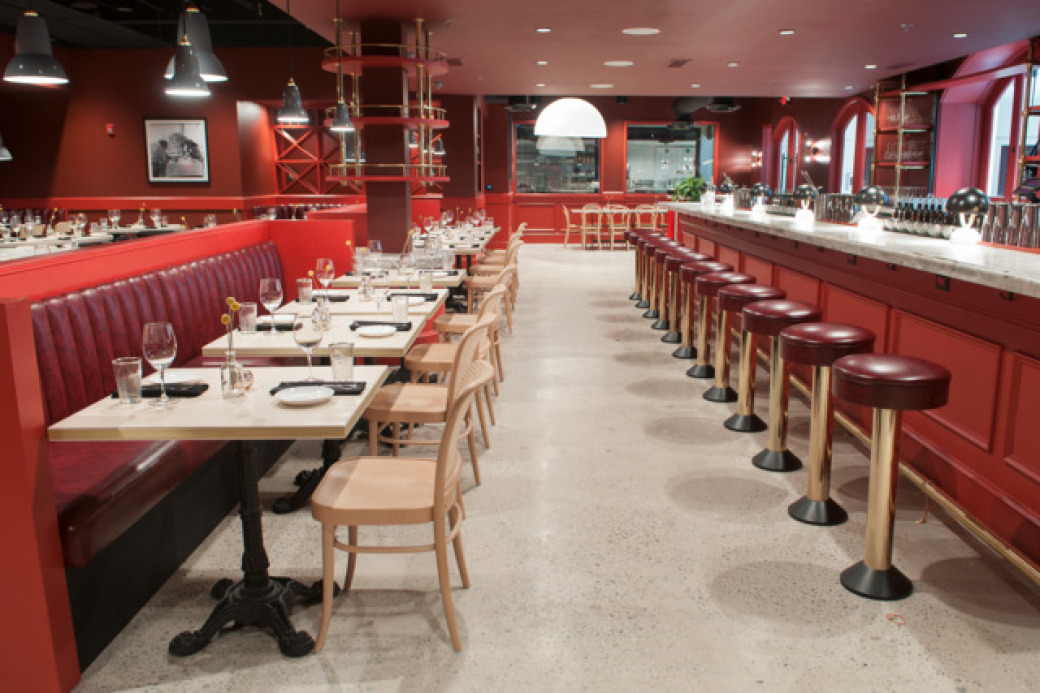 When entering Buckhead's Andrews Entertainment District, now known as the more polished Andrews Square, it’s not hard to spot Bar Americano. The red phone booth once used to enter the former speakeasy, Prohibition, is gone, but its color remains: Everything — and I mean everything — is bedecked in slick swaths of Ferrari red.

Bar Americano takes its name from both the espresso drink and the classic Campari cocktail, and its concept from Ten Apart, the group behind the Pinewood, the Mercury, and fellow newbie Deep End. Designed with the help of Square Feet Studio, the 150-seat restaurant fills Prohibition’s vacated space and then some, with a 30-seat private dining room, full bar, and an outdoor patio with another bar. Sister concept Bar Crema shares the patio and really feels like another room of the restaurant.

Sinatra croons. Walls are deep red. There are marble tables, red leather banquettes, and black and white framed photos adorning the walls. A sleek marble bar shows attention to detail with red leather stools, banker style lamps, purse hooks, and outlets for phone charging. Wine shelving is empty now (liquor license pending) but will presumably be filled with bottles of red, furthering the intimacy of the space by blocking the kitchen entrance and bathroom hallway. Floor-to-ceiling French windows will open up in warmer weather.

BREAK BREAD: Bar Americano's focaccia services comes with whipped fresh ricotta and a drizzle of high quality olive oil.Joeff DavisThere are plenty of Italian restaurants in Buckhead (Antica Posta, La Grotto, Pricci, Storico Fresco, Davio’s, Taverna, Portofino, Mirko ...), but nothing quite like this. Bar Americano feels like an attempt to recreate a particular amaro and coffee fueled experience that somebody once had on a vacation to Italy. And it’s a valiant attempt, to be sure; on the cozy patio, it's easy to imagine yourself an old-school Neapolitan trattoria, café, or gelateria instead of in the heart of Buckhead. Well, if you squint.

The menu has everything from antipasti and salads to pasta and pizza with plenty of desserts in-house or next door. While nothing is particularly stunning, it strikes a fine balance of streamlined classics and modern Italo-American fare. Executive chef Adam Waller (Sotto Sotto, STG Trattoria, Bocado) was stationed in Okinawa, Japan, for two years as an ammunition technician with the Marine Corps. He took every opportunity to explore the culture, trying all the food he could before immersing himself in Atlanta’s restaurant community.

Waller says that despite Buckhead’s reputation for late-night barhopping, the post-bar food options in the neighborhood were strangely limited. So he created a hearty late-night menu perfect for soaking up booze: meatballs marinara, Parmesan polenta, salads, and pizzas, all available until 2 a.m. “The concepts were developed to really connect with the community, so the menu for each dining period really has something for everyone," he says.

Housemade pastas are conservatively portioned. Add a salad like the kale and grilled radicchio ($14), lightly tossed in gorgonzola dressing with half slices of red grapes and slivers of red onion, to make a meal. Puffy bundles of beef cheek agnolotti ($15) in a slick pool of russet braising jus are a standout. Waller makes his personal favorite — rigatoni in vodka cream ($14) — seem light and refreshing with a kick of Calabrian chili. Spaghetti pomodoro ($14) is another light one with cherry tomatoes and plenty of basil and parm. Bulk it up with the addition of Sal’s meatballs ($6), made with beef, pork, and veal. The recipe comes from Waller’s great grandfather, a first generation Italian from Sicily.

Mains are really big, and sometimes punched up with unexpected ingredients. Flounder piccata ($26), for example, replaces the traditional chicken with a seasonal fish, served alongside local produce. Chicken parmesan ($24), another family recipe, could feed three people. It’s lightly flavored but heavily breaded, with marinara, green salad, and a pile of roasted cherry tomatoes. Pizzas are 12 inches across, with charred crust, bubbly dough, and cheeky names like Marge Knows Best ($16), Spicoli Special, and Shrooming.

MUST LOVE CHOCOLATE: Bar Americano's chocolate budino is denser than traditional, with olive oil, sea salt, and chopped pistachios.Joeff DavisOwner and beverage director Julian Goglia designed his bar/coffee program with an emphasis on aperitifs and classic cocktails that pair well with the fare. Three stirred options are on tap, and you can customize Americanos by choosing your bitter and vermouth.

Desserts are classics (and don’t forget the gelato next door). Ricotta cheesecake ($8) topped with maraschino cherries is super fluffy with wisps of lemon. Cannoli ($7) are crunchy but the filling ultra smooth and on this occasion, off-tasting. Don’t miss the chocolate budino ($8). While denser than traditional, it offers full-on dark chocolate enhanced by olive oil, sea salt, and a hefty sprinkling of chopped pistachios.

Dining at Bar Americano on a recent evening, I heard neighborhood couples telling their servers, “We’ll be back,” and food bloggers (who else takes that many cannoli photos?) discussing proper hashtags. In my head I heard that song “Tu Vuo’ Fa’ L’ Americano,” satirizing the Americanization of Italians after World War II. “You want to be an American,” the lyrics translate. In this case, we have an American restaurant attempting to come off as Italian, but the sentiment remains the same. And the result? Well, it’s something like that scene in The Talented Mr. Ripley. Drinks in hand, the revelers screech: “Americano, Americano… whiskey and soda…”