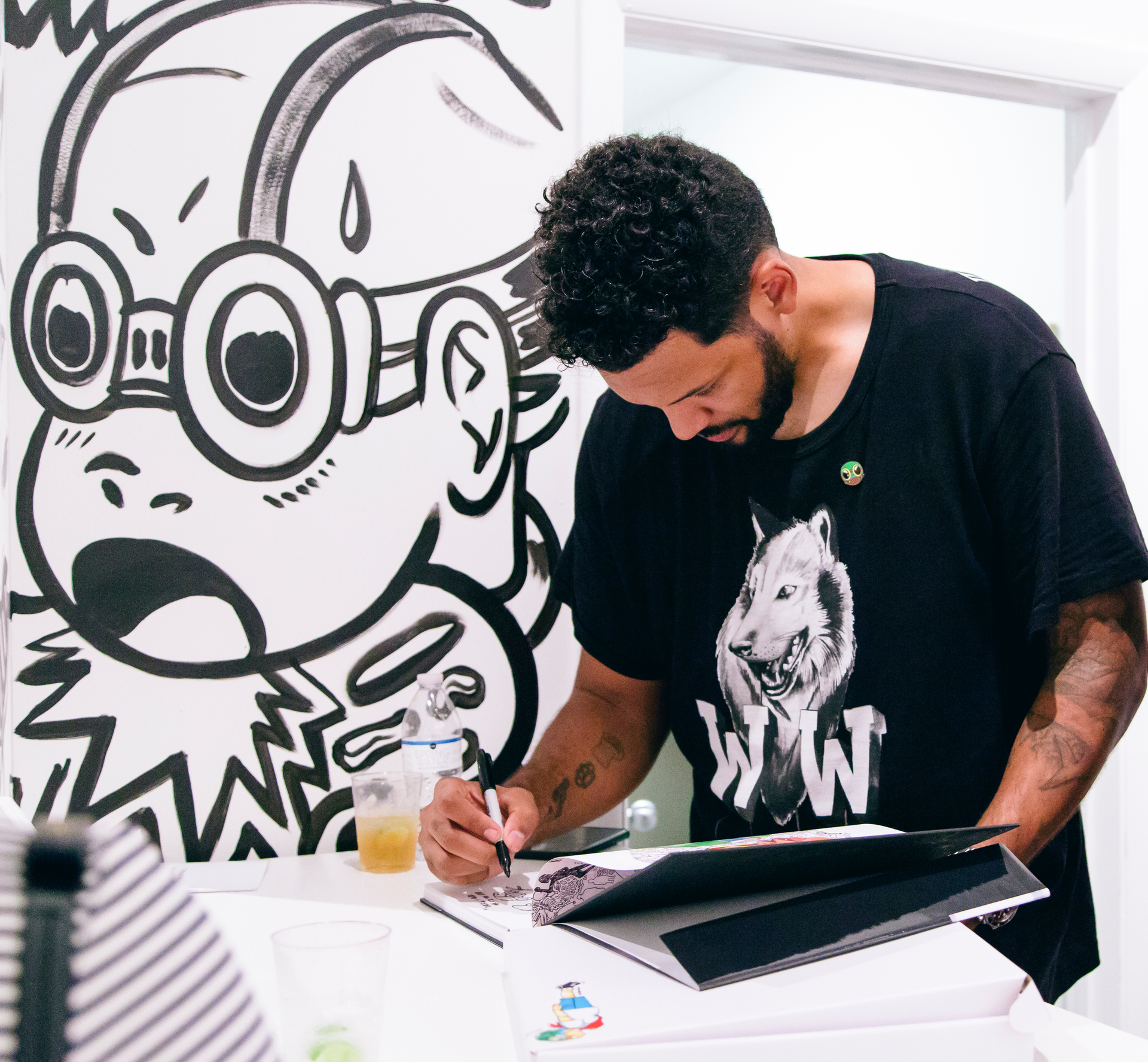 Photo credit:
Social commentary usually isn't a focal point in acclaimed visual artist Hebru Brantley's work. The Chicago-based Clark Atlanta University alum's often-vibrant, fantastical art taps heavily into Afrofuturism and, while personal in terms of historical influence and scope, hasn't delved deeply into current social issues. Until now.For the past couple of years, Brantley has found himself in the same place as many black Americans: forced to occupy a space of constant fear, anger and trepidation born from the repeated images of black bodies being abused and killed by law enforcement and racists who deem themselves worthy to oppose black folk's humanity. As the Black Lives Matter movement has grown legs in the wake of the deaths of black men and women across the country, Brantley's inner turmoil and heartache needed a release. Naturally, he turned to art. His new show, Clay Pigeons, on display at Chastain Arts Center from June 16 to Aug. 4, will showcase the work produced from that emotionally dark place."It's a little different from my previous shows," Brantley admits. "It's a little darker, a little more heavy-handed in terms of drawing a big reaction to certain things that have happened over the past two years, incidents with black people and the police and the justice system, with Trump being elected. ??_ I've got more personal in my response to what's been going on. This work is my way of engaging with certain problems.?۝Specifically, in Clay Pigeons, Brantley says he'll challenge our view of the protagonist, "constructing a frame around the idea of a hero." Vulnerability, race, failure, need and imperfection are ideas within his adaptation. He says for his exhibition, he was constantly creating an instinctive reaction to everything that's been occurring in America. In fact, his art became his diary, in many ways, where he could work out his feelings of rage, hopelessness and at times, conflicting emotions of hope in the face of seemingly endless oppression."I'm injecting a lot more of my feelings as far as the state of things as opposed to a broader, more nondescript narrative," he says. "There are still a lot of Afrofuturistic tropes and themes but it's more direct in terms of addressing social and even economic issues. This is my outlet, the way I can speak to people. I'm using this show as a platform.?۝But the creative aspect of the work was challenging. Brantley admits he hesitated to display it all because it so starkly deviates from the works that made him world-renowned."I wrestled with a lot of it," he says. "There was that side of myself I was comfortable as an artist, and I challenged those perceptions as I was creating a lot of this work. There was still a point in which it was uncomfortable and strenuous to pull from this side of myself and allow it to be seen.?۝Brantley, who was largely inspired by graffiti culture and Jean-Michel Basquiat, says this work is a direct reflection of the concept of lost African-American mythology and Afrofuturism, and of the feeling of dread he sometimes feels when he looks at his 14-year-old son and has to explain how he can and should protect himself in this America, from the fear that his black skin evokes."I feel targeted," Brantley says. "So the conversation has been constant. I have to figure out how to address these issues with him.?۝Next up, he has an exhibition in Chicago's Elmhurst Art Museum, which will draw heavily from his Atlanta show. His exhibit here, however, will be the first time anyone has seen this side of his work. The decision to premiere this new side of his work in Atlanta was deliberate. "Atlanta is a great place to be able to showcase this work because I think the audience that I have in Atlanta will be a lot more receptive to this," says Brantley, whose large-scale mural "A Dedication" previously covered the Sound Table's wall in Old Fourth Ward. His 2013 art show, Penny Candy, drew more than 2,000 art enthusiasts to the Loews Hotel in Midtown.In the end, Brantley says he had to get this work out for his own sanity and heart.


"I'm a bleeding heart, and it's hard for it not to affect you," he says. "As you're trying to get over one incident, five more happen. It's the way of the world now. It's like before you can catch your breath, another thing happens. I haven't been able to catch my breath.?۝Hebru Brantley | Clay Pigeons opening reception. Free. 6:30 p.m.-9 p.m. Friday, June 16. Chastain Arts Center Gallery, 135 West Wieuca Road, N.W. www.ocaatlanta.com/chastain.''

Morris From America reflects on those awkward tween years Article

image-1
Chad Hartigan used to hug his pillow a lot when he was 12. But one special day, he got bored and decided to take his pillow love a step further. He dressed it up, slow danced with it, then proceeded to hump it. It’s a moment that changed his life.

“It’s an embarrassing true story that always got a reaction from people, so I thought maybe it would be a good scene in a movie,”...

What Did You Expect': Artemus Jenkins turns lens of love homeward Article

image-1
What is life without preconceived expectations? Notch8 Gallery will touch on on that theme Fri., February 12, with the opening of its new photography exhibition, What Did You Expect, featuring work by Kelly Blackmon, Spencer Charles, and Chilly-O, among others and running Feb. 12-March 6.

Although the concept of human expectation (and, let’s face it, often subsequent...