When someone great is gone 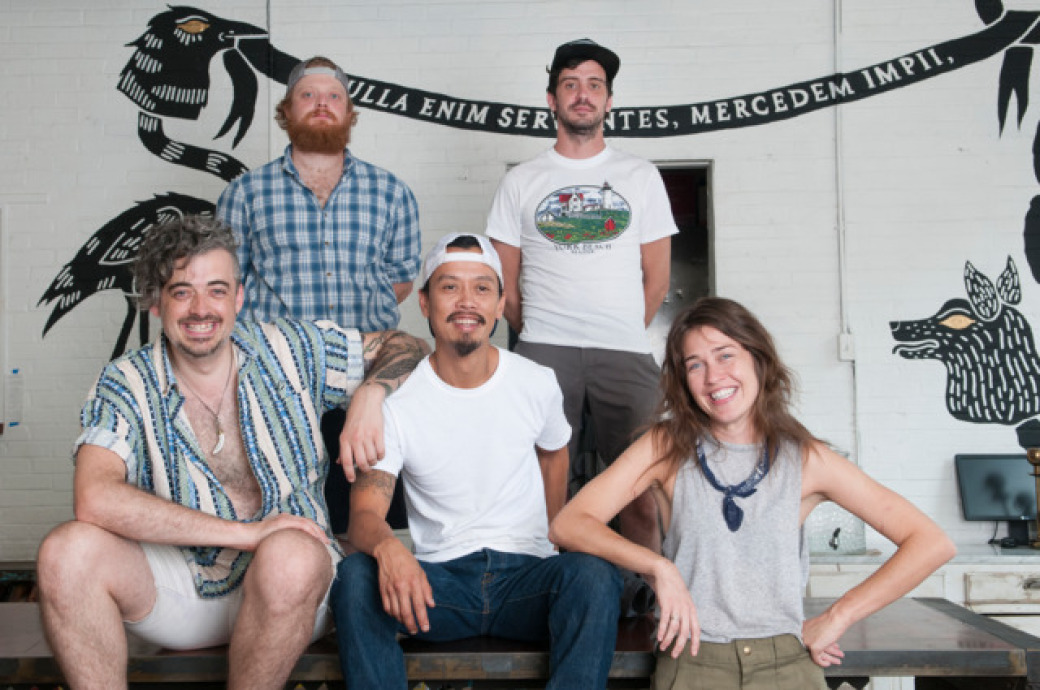 On a cold Monday back in January, things were not business as usual on the Beltline near Paris on Ponce. Strolling pedestrians slowed, curious, as they passed by thousands of people gathered under an impromptu, professional-grade fireworks show. Flashes of color illuminated tear-stained faces. Atlanta's tight-knit restaurant community had gathered to say farewell to a brother-in-arms: Angus Brown, the beloved chef and co-owner of 8ARM and Octopus Bar.

Brown, just 35 years old and at the zenith of his career, had died suddenly five days prior. The drug-induced circumstances of the heart attack that killed him are no secret: Narcotics were found at the scene, according to police reports. It was up to 8ARM co-owners Nhan Le and Skip Engelbrecht to deliver the news to staff. "I woke up to however many missed calls from Nhan, Skip and Terry, Angus' sister," recalls Sarah Dodge, 8ARM's in-house baker and Brown's close friend and former girlfriend. "I already knew. Of course I knew what happened when I saw that. I remember screaming. I came into 8ARM and sat for about three hours by myself and was just crying and felt really numb. Then Nhan came and we sat together. It was a day that I knew was very possible. I was so mad, sad. I worked a lot and then I would like, not show up to work. Grief is the weirdest game."

In late November 2016, while 8ARM's patio bar was still under construction, Brown had asked Josh Fryer (now general manager) to lead the beverage program. The two became friends over the years, spending late nights at Octopus Bar exchanging similar philosophies about food and farming. They worked together briefly during the bar and beverage program's development stages. "Angus dying brought on shock, disbelief and sadness," Fryer says. "It was like a giant balloon had just popped."

GONE BUT NOT FORGOTTEN: Chef Angus BrownJoeff Davis/CL FileAnd yet, while 8ARM closed the day following Brown's death, it reopened the next, seeming to carry onward without missing a beat.

"We had to bring normalcy back to our days, where we could be in a space celebrating him in the background and in our thoughts and minds," says Wilson Gourley, who became fast friends with Brown when they met working together at Miller Union in 2011. "It helped me ... Free time and being sad I really wouldn't know what to do with."

Adds Fryer, "We needed to keep the vision of 8ARM alive. While we were sad Angus was gone, we would avoid invoking him unnecessarily, because we didn't want his death to put a cloud over us, depress us, hold us back or slow us down."

The day after Brown's death, Gourley delivered the news to other industry folks, making calls and paying visits in person. Despite 8ARM being closed for business, he also went to work. "I took inventory of everything we had and looked at the menus and tried to figure out what the hell we were gonna do moving forward," he recalls. "I wanted us to be able to hit the ground running, as a team."

Gourley was working at Staplehouse full-time when Brown asked him to come open 8ARM with him that November and continued working full schedules at both restaurants. He left Staplehouse immediately after Brown died and has since taken over 8ARM's breakfast and lunch menu along with all produce orders. "I just kinda jumped in," he says.

For such a freshly conceived restaurant, with constant menu changes, a heavy focus on local farms and day-to-night operations, moving ahead without its star player and his instincts was difficult. Luckily, the team that remained was strong. Brown had fortified his vision for 8ARM by helping individuals hone in on their talents and creating space for them to show off. "Angus was really good at seeing the genius in other people," Dodge says. "We had this general consensus that he put us all in the places we needed to be. And when he died it was like, 'we gotta keep going.'"

And with that, the staff pulled together and threw themselves into the task of opening their outdoor bar, centered around a repurposed shipping container. "Despite all that had happened a few weeks prior, there was a genuine excitement leading up to the bar opening, among all of our staff," Fryer says. "You could feel the energy bursting at the seams."

A PLACE TO GATHER: 8ARM's patio bar has become one of the most popular watering holes in Atlanta.Eric Cash/CL File

The bar opened Jan. 27, a luminous haven on the corner of Ponce de Leon Avenue and Ponce de Leon Place, where California punk meets Miami Vice with the distinct feeling that David Lynch could be curating the soundtrack. The beverage menu blends classics with Fryer's inventive irreverence, such as the Coronation (essentially a Manhattan made with fino sherry) and the Bijou, a mix of green chartreuse, sweet vermouth and gin. The walk-up bar, flanked by communion-style patio tables, has been hosting 8ARM's Chaka Khan Hacienda parties with DJ Ree de la Vega every Sunday during the summer as a way for locals and industry folks to escape the OTP chaos that descends onto Ponce City Market and the Beltline each weekend. After Chaka's last hurrah on Oct. 1, the theme will change for the season; Fryer says they're planning a new monthly event called Night Shift, which begins the Sunday before Halloween.

Meanwhile, in back of house, workflow has been streamlined, menus compartmentalized and Brown's role filled through the rise of 8ARM's new key players. Keith Remes, who once lied on his resume to get his foot in the door of a professional kitchen, finds himself, now 30, at the height of his career as 8ARM's head chef. "I wanted to get a job cooking, but no one would hire me 'cause I didn't have any experience," he recalls of his first gig with a laugh. "So I made up a fake resume, moved to Maine in 2010 and went around to nice restaurants and this old-school French steakhouse hired me." Despite being exposed for his lie just three days into the job, Remes was allowed to stay on thanks to his enthusiasm and determination to learn. Eventually, he moved back to Atlanta and responded to a Craigslist ad from Chris Hall at Local Three in Buckhead, where he worked for several years.

During this time, Remes met Le and Brown as a late-night patron at Octopus Bar, forming a loose friendship that went on for years. Remes idolized the pair, describing them as his "culinary superheroes," before eventually nabbing a job with them at Lusca in 2015. Once 8ARM opened last year, Remes was brought on as a sous chef and wrote and managed the dinner menu on Brown's off-days.

After Brown died, Le picked Remes to fill the executive chef's shoes. "It was definitely a really abrupt change, and it was scary," Remes says. "It felt shitty, 'cause I was standing in a position where if anyone looked over, they expected it to be him and not me. I was really worried that people might be like, 'Who the fuck is this guy, doing that?'"

Brooks Rayman, who came from Candler Park Market to work for Brown late last year, is now 8ARM's kitchen manager. Gourley took over writing and managing the daytime menu while bringing in new local products daily and maintaining relationships with local farms and purveyors. Continuing Brown's legacy, 8ARM keeps nearly everything local, from the Stone Mountain Cattle ribeyes to the Decimal Place cheese to produce from Finch Creek Farm in Winder and Woodland Gardens just outside of Athens.

"I am a firm believer in changing with the seasons," Gourley says. "The dishes work themselves out because the produce is so good here [[in Georgia]]."

8ARM's menus today reflect not a vision diluted or lost, but rather, one that has deviated while staying true to its founding principles. "Angus taught me to respect the tradition of things and find your own voice and go from there," Dodge says. "It's like my flaky dough, the cinnamon roll, the brioche, the pan au levain - it's all very traditional, but I put my own spin on it."

Menu items like the fig toast reflect this blending of the classic and the contemporary, with a spread made of almonds, black truffle and goat cheese served over Dodge's house-made bread, toasted with lemon juice and scallions. In his late night menu, available only after 10 p.m., Remes serves up nori smoked pork dumplings - an idea that came about one night after the realization that he'd run out of wood chips, but had tons of sushi-grade seaweed. The result? Plump and juicy packets of pork shoulder sourced from the East Atlanta farmers market, blended with scallion, cabbage and bacon spam in a chicken broth with chili oil.

One of the most important things that reflects in our menu is how I learned to simplify my food," Remes says. "Other people were doing like 12 components on a plate, and I thought that was the way to be. Being complicated to show off your skill. It's not true, and Angus is where I learned that. You put like four or five things on a plate and it gives you so much less to hide behind."

In accordance with Brown's signature minimal-is-maximal approach, 8ARM's menu still offers no more than eight items at a time, with each dish comprised of five ingredients or less. "8ARM really brought Angus's focus back into who he was and his ideas of food," Gourley says. "The way that his eyes would light up when he'd talk about a simple ingredient or the addition of an herb or citrus that changes the complexity of a dish, he'd be like, 'Boom, that! That's what you're going for.' It takes you, the way we say it, to 11."

"We do what we want to do, even if it doesn't fit the standard restaurant business model," Fryer adds. "We want people to enjoy themselves, but we do not let people change us. I think our happiness with what we've created reflects in the friends and guests that come in night after night."

In this way, Le and his team will continue plowing forward. Construction and development for a new coffee bar location are currently underway inside the Beltline's entrance at Paris on Ponce. Le and Brown's forthcoming seafood concept, AMA, which has been in discussion since early days at Lusca, is in planning stages as well. And while staff members are tight-lipped on the details, an unmistakable anticipation hangs in the air around them. "What I will say," Fryer says, "is that the tentacles of the octopus are many and long."