The art of growing, and growing up 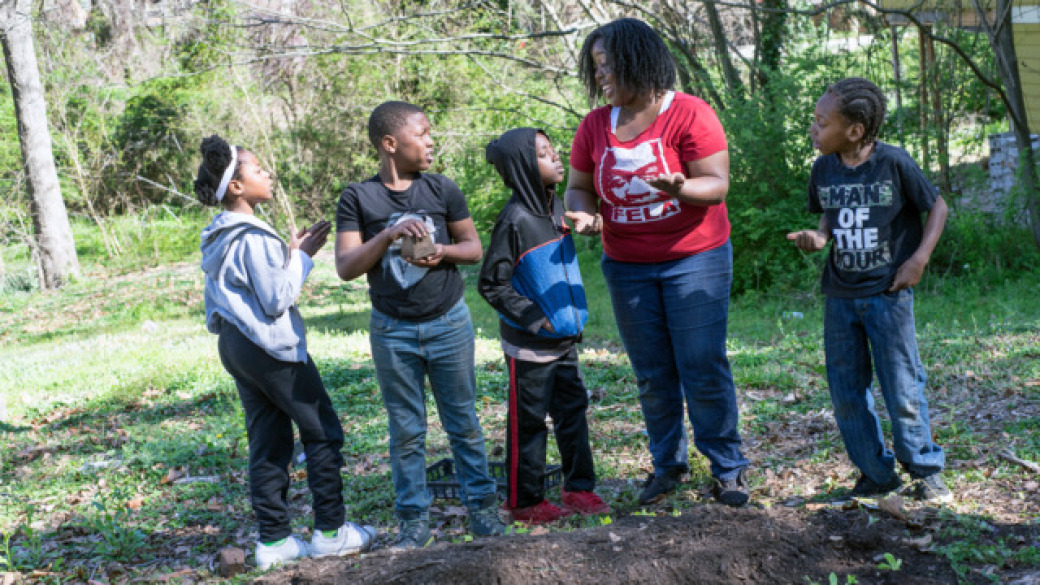 There's a small community garden on Gordon Street in the West End neighborhood of Atlanta. It's unassuming: just a modest output of produce, maybe the size of your average hobby garden. But what's being created here goes far beyond lettuce and squash.

On the first Saturday of each month, you can find Abiodun "Abbey" Henderson in the Westview Community Garden schooling young kids in the art of growing, and growing up. While the kids plant and dig in the soil, Henderson is always speaking, weaving in life lessons about African culture, family or what real success looks like. Everything she does is about empowerment through education and job creation. Her medium? Food.

Henderson, a 34-year-old Brooklyn native and second generation Liberian-American, is an activist at her core. Her desire to elevate southwest Atlanta's black youth has been most notably achieved through her social-minded enterprise, Gangstas to Growers, which aims to create job opportunities for the formerly incarcerated. This work, paired with her garden mentorship programs, lends to her growing reputation as a powerful change-maker in the city.

TO MARKET: Henderson sells hot sauce at a MARTA market with Kwon (left), a formerly incarcerated 19-year-old who has found a path to employment through Gangstas to Growers. | Joe Spiccia

Yet, Henderson is not the first activist in her family. "Back in the day my father was a rank and file Black Panther member," she recalls, "socially conscious, very handsome, charming and funny." In the early '80s, Henderson's father, Bruce, met her mother, Dessie Webster, a first-generation Liberian immigrant, seminarian, radio host, educator and social entrepreneur. Henderson came into the picture shortly after.

While Henderson got her outgoing personality and zeal from her dad, it was her mother that taught her perseverance and compassion. Webster started an employment agency for immigrant women in Queens while opening a private school and teaching night classes in child psychology at New Rochelle College.

When she was two, Henderson's parents split up and she went to live with her mother, spending much of her childhood at home as a self-ascribed "latchkey kid." Webster worked day and night to advance justice in the community despite being plagued with health issues. "One night she didn't come pick me up," Henderson says. "We found her the next morning parked in front of the grocery store. She had passed out a couple of blocks from my house. The car was dead. It was a brain aneurism." After battling these issues for years, Webster eventually passed away when Henderson was still young. At 16, she left Brooklyn and headed south, feeling a little lost.

After a few years in Mississippi and Louisiana, the then 20-year-old landed in Atlanta, where she got a gig at a restaurant in the airport. She was here when, one day in 2011, she received news that her father had died. Amid the sadness, a small flame began burning inside of her, maybe a manifestation of her father's activism, maybe of her mother's compassion. When she started talking with a customer in the restaurant who spoke passionately about the emerging socio-political Occupy movement, that flame grew. In the wake of her father's death, almost in fulfilment of his activist legacy, she boarded a plane to join the protests in Washington, D.C. There, she met Malik Rhasaan, founder of Occupy the Hood, an offshoot movement centered around empowering those living in low-income and predominately black neighborhoods, with a specific focus on food security and access.

"The mass loss of factory jobs left a huge hole that we don't talk enough about," Henderson says. "And now, the factories are in the prisons. We need a new industry that we can plug people into, green energy. Agriculture is the way."

A newly inspired Henderson returned to West End in 2012, and despite a complete lack of experience in the field of agriculture, her passion and commitment gave her enough credibility to take over management of the Westview Community Garden, at the heart of the neighborhood. After driving a bus for a week-long summer camp, Henderson naturally assumed responsibility for the vehicle and became known as the girl around West End with "a bus full of babies," constantly carting local kids around the neighborhood, feeding them and teaching them in and out of the garden.

As her commitment to the neighborhood increased, it became clear that Henderson was following in her mother's footsteps, not only as an educator but also as a job creator. More specifically, she began advancing the Occupy the Hood agenda for formerly incarcerated black males aged 18-24. For a young man fresh out of juvenile detention or prison, job opportunities tend to be slim. So Henderson decided to pave another way, coming up with the social-business idea for Gangstas to Growers last April and successfully piloting it with six paid interns this year. Next year she plans to train and employ 10 interns, placing them with partner employers after completion of a year-long program.

Here's how the business works: Henderson connects with the Atlanta Public Schools Adult Education Center to recruit at-risk or formerly incarcerated young men as interns through their GED program. They are trained for six months, participating in a well-compensated educational work program centered around agriculture, but which also includes financial literacy education, cooking lessons and many other life and career skills. After the first six months, trainees are launched into a half-year paid externship with various employer partners, including restaurants, farms and other companies related to the Atlanta food movement. There, each graduating extern will gain the necessary tools and connections to find full-time employment or even to start their own food-related venture.

Beyond acting as a for-profit employment agency, another part of the funding strategy for the enterprise includes the production and sale of a new Gangstas to Growers hot sauce called Sweet Sol, made with lavender, turmeric, muscovado sugars and locally grown habanero and cayenne peppers. It has a distinctive flavor that Henderson says "tastes like candy, but is hotter than the sun." The ingredients are grown and bottled by the interns through a partnership with Truly Living Well, an urban agriculture nonprofit in West End. Sweet Sol is currently being sold at the West End MARTA station on Tuesdays from 3-7 p.m. and the Five Points station on Fridays from 3-7 p.m. Henderson plans to eventually expand distribution to local restaurants, bars and markets.

KEEP IT CLEAN: Henderson often plays the role of both mentor and mother within her programs. | Kelly Truitt

Henderson's job creation model has a lot of steam, but one of the biggest threats to its success is gentrification. Henderson recalls the reactions of local kids after a Westside garden was bulldozed to make way for an investment property. "When white people move into the neighborhood, they gotta move," she says. "That's not good on their souls or their self-esteem; that causes them to act out. It's damaging, it's traumatic." She implores both developers and white people to change their ways: "I really want folks to give black folks a chance to build something, especially in the Westside. Can you please let us have a little control over our destinies? We need more time."

According to Henderson, one thing that is not needed is charity. "We can't just give out welfare; we can't just give out food stamps; we don't need a handout. Just like they do in Africa, dropping food from the sky - that's not what we need. We need education so we can do for ourselves."