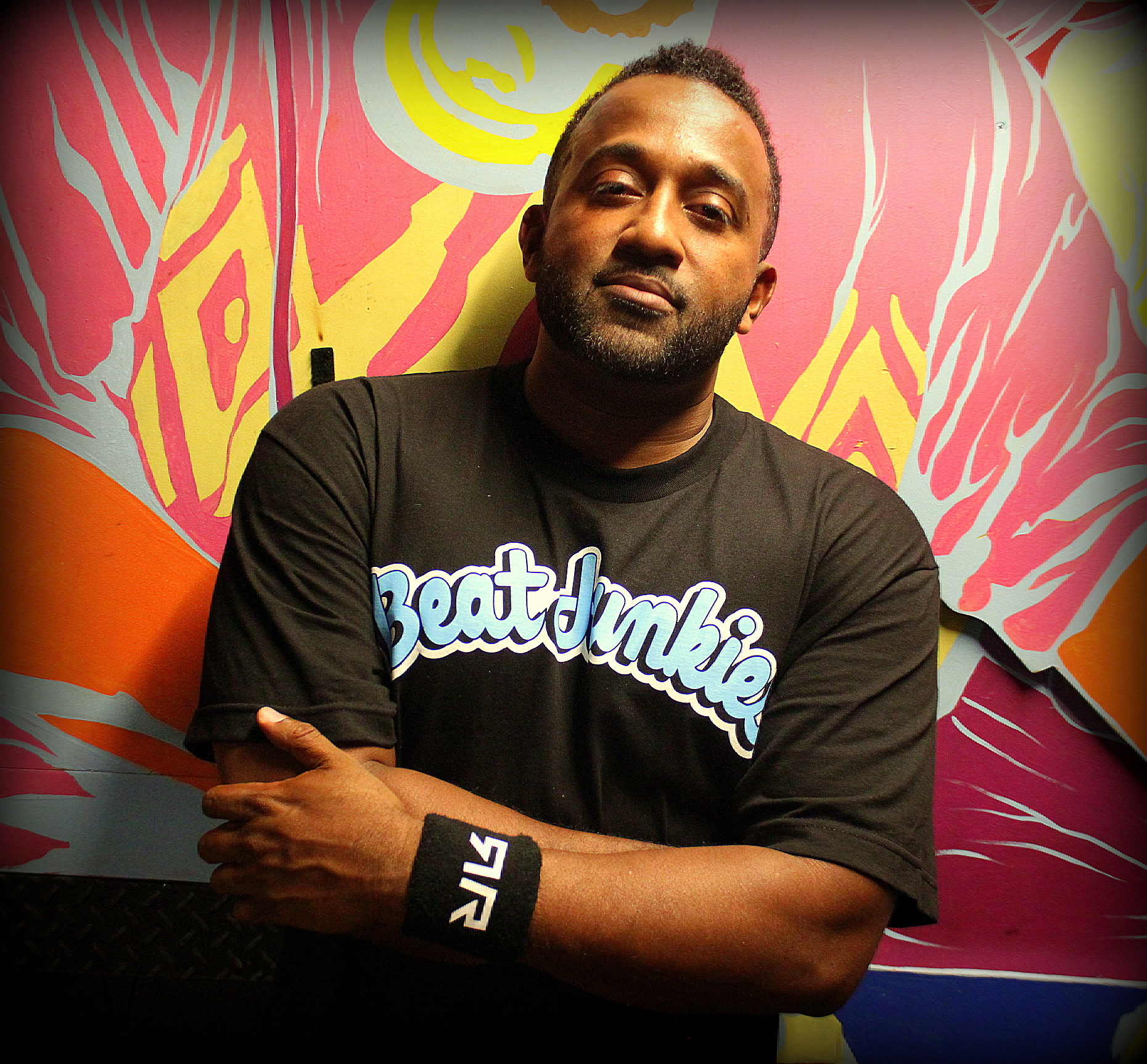 After nearly 20 years, A Tribe Called Quest has released its sixth and final album, We got it from Here... Thank You 4 Your Service. Upon arrival the album was hailed as a classic that puts the Queens-based outfit's sound in a modern context. Guest appearances from André 3000, Kendrick Lamar, Anderson.Pak, and more make the album a celebration of the group's legacy. It's also a poignant final statement from one of the most vital and progressive hip-hop acts of the '90s.

In March of 2016, ATCQ's co-founder and emcee Phife Dawg, born Malik Taylor, passed away due to complications related to diabetes. He was 45 years-old.

In life, Atlanta's DJ Rasta Root (Dion Liverpool) was Phife Dawg's manager, cohort, and right-hand man. While the rest of the world reels over the album's arrival, Rasta Root took a few minutes to reflect on his final days with Phife, recording the album, and being a friend, confidant, and brother to a true hip-hop innovator.

The new A Tribe Called Quest record is out. You were my connection any time I did an interview with Phife Dawg. What was your official title in relation to Phife?

I don’t know if there was one title: Best friend, producer, manager, co-collaborator, business partner, it was like nine things, it’s crazy. That’s the role we played in each other’s lives. But most importantly, Phife was my brother.

What do you think about the new album?

I like the album a lot. I love the attention it’s received. I love the accolades, I love that people love it. The timing of the album was great because of what’s going on in the rest of the world — the timing couldn’t be any more perfect. I wish Phife was here to see everything and enjoy it and sit down and listen to the final mix with me. Obviously it can’t be that way, but I know he’s smiling. I like that what I hear on the final copy of the album isn’t necessarily what I heard in the studio. Meaning, a lot of the production changed and was augmented from when we were recording up until March, to when they released it. As a fan I was able to sit back and absorb the new mix, as opposed to saying, “I know what’s coming.”

I think my favorite song is “Dis Generation,” for a lot of reasons, that Musical Youth song, “Pass the Dutchie,” was one of my favorite songs when I was a kid. Also he just sounds really vibrant and refreshing and happy and excited in his verses on that particular song. I let my friend hear it a couple days ago over Skype — also a close friend of Phife Dawg. I kind of choked up at the end of his verse, the last few lines. I was happy but also sad at the same time, you know? It’s crazy. You just have to understand how the stars aligned and the divine design of everything. He was able to hang out with his childhood best friends, doing what he loved doing, which is record music. He and I were able to hang out in Jersey for weeks on end as they were recording, and scheme and plot and plan his solo album. He was already working on his album. We have like 13 completed songs of solo stuff. His relationship with his wife was great. His relationship with his dad, his mom, everything was lining up. He was coming into a good place. So, you hear that in his voice. That’s what you hear in that song particularly. It’s like, “Wait a minute, we’re going to get a second chance for people to hear it again. And I’m nervous about it, but I’m also very excited to see what people think.” That’s what you hear. That’s why I think I choked up. You feel like you’re almost there together, but he’s not here now. But, I guess in the big picture of everything and how life works, he is.

Now that the rest of the world can hear it, do you still have an emotional reaction when you hear the music?

I don’t think it’s an every time thing. I’m sure as I listen more and more, I’m gonna have my moments. I remember when he laid the verses and when he wrote the verses. So I have these vivid, physical memories of where I was when I first heard it or what the concept was for that song when it was being created. And being in the studio with him when they did “Solid Wall Of Sound,” and how amazing that was to witness them come up with that whole thing and create it. So I have an inside, backstage view of it, but I’m also able to absorb it and enjoy it as a fan and take it for what it is when it was presented to me.

Did you have any involvement with the record?

Other than my duties as his manager and another year in studio, for whatever it was worth, just being there in itself, I guess you’re involved. Tip is all about energy, so I don’t think he would want anybody who would affect their creative energy they were trying to capture, by being there. So I think anybody who was ever there and heard anything was involved in some way and did have some part to play in the creation of the album. For me, it was just having to get Phife to the point of saying, “You know what? I’m going to go to Jersey, get out of my comfort zone and record with someone I haven’t recorded with in almost probably 20 years.” So that was a big step for him. It was a step, like, “I can’t be in the studio with this guy.” And I had to be that teammate saying, “You got this. Let’s win this game.” My involvement was almost like a coach. He used to call me and say, “What’s going on, coach?” Because he’d know I’d have those pep talks with him. I wouldn’t take credit to say I helped create the album. But I would take credit of saying I helped get him in a place of wanting to create the album.

You probably served as someone he could bounce ideas off of, too.

Oh, definitely. He’d let me hear the verses. I guess, I’d help him with some of the lines. He would ask. And you know, I’m not a writer, but I’d know what sounded good and what didn’t. I’d help him with a word here and there. He’d bounce ideas off me and you know, we would talk about his involvement with recording the album, and keeping him upbeat, and staying positive, because it was a long process. The hardest job was keeping him in Jersey. Saying, “I know you want to be home with your family, but this is a good opportunity to hang out with your friends. We’re here together, so let’s go out and get your album shot, let’s go out and shoot a video.” So we were able to do a lot during the day before we went to the studio at night. We were busy.

At the time, when you were keeping him on task, was he thinking about his own mortality?

Not at the time, per say. I think somebody in his situation, somebody who’s dealing with the difficulties of diabetes and number two, dialysis three times a week, and treating it in a place where other people are thinking about their mortality, it’s bound to affect you in some way. He did that three times a week, four hours at a time, for years. I think it was always on his mind, being in his situation. Seeing people pass from the same disease and seeing people going through really big struggles in his life. I think that comes along with the territory of being on dialysis. It can happen, you know? To any of us, in fact. It makes me think of stuff I may have to deal with in the future. Our friends and peers are passing away at fairly young ages.

Are you still in touch with his family?

Absolutely. We talk everyday. If not via text, on the phone. It’s funny you said that, because I texted his mom right before you called and said, “Hey, do you have a few minutes to talk?” I just wanted to check on her with the album out. She went to the listening party a few days ago and she loved the album. It’s a lot. You can’t escape the thoughts. We were very close, and yesterday I told them, we’re like a trident. We have to advocate for him, keep his legacy alive, stay focused, and make sure everything we do is how he would want it done. I’m really glad that before any of this we were close anyway. I call her mom. She calls me her adopted son. It’s good because there was no learning curve of loving each other. We’ve always loved each other.