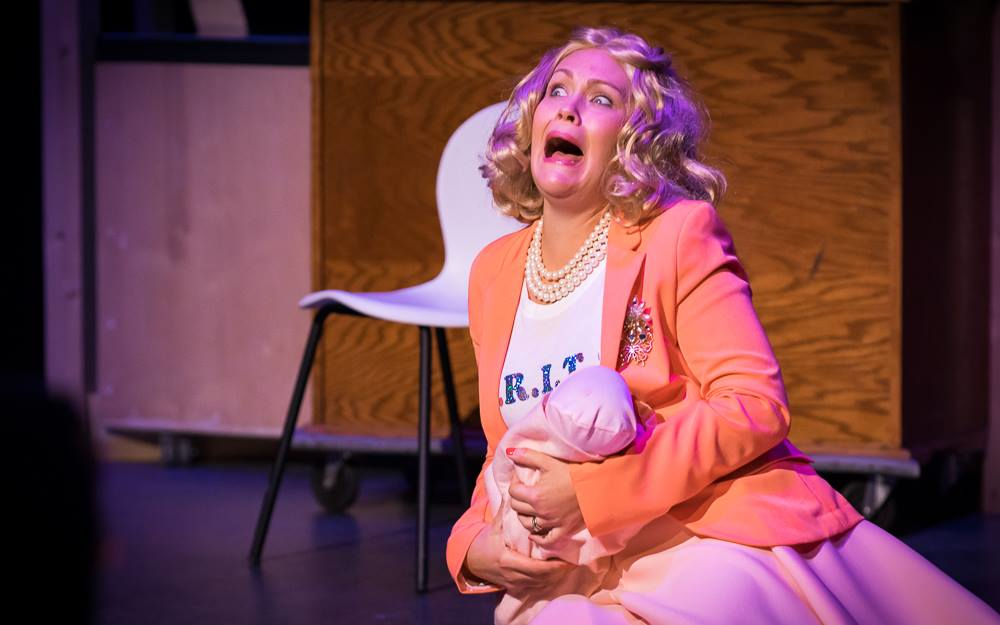 Improvisers talk about long-form improv the way authors talk about their latest novel, dropping words like magical realism into the conversation and discussing the effects underlying motives have on a character’s actions. The bones that make up long-form improv are the same that make up planned storytelling. It’s just, you know, everything is created on the spot.Improv can be divided into two general types: long form and short form. As the names suggest, length is the primary difference between the two. Short form usually lasts two to five minutes and often is structured as mechanic-based games akin to those popularized on “Whose Line is it Anyways?” Long form is concentrated on narrative storytelling and generally runs 20 to 40 minutes, though much longer stories aren’t uncommon. Dad’s Garage, for example, has performed Scandal!, its improvised soap opera, in weekly segments for upward of two months. Audience members are given a recap of the past week’s events, in case they were unable to catch the show, but some loyal fans never miss an installation.Long form, in particular a style called the Harold, was popularized in Chicago in the 1960s. In a Harold, improvisers work through a structured format to intertwine three different story lines together. It’s kind of the standard of long-form improv, and the form’s success is one of the reasons Chicago has become an improv mecca. Aspiring actors and comedians head to Chicago with dreams of one day performing on the Second City stage and being recruited by “Saturday Night Live.” Atlanta’s improv scene, mighty, but lacking the pull of more established improv scenes like Chicago, New York City, and Los Angeles, doesn’t really have to deal with such ulterior motives.“I’m sure there are people here who want to advance their careers but generally people are gonna move somewhere else to do that,” says Matt Horgan, associate artistic director of Dad’s Garage. “The people who are really committed to doing improv in Atlanta are doing it because they love it and that’s nice.”Though the art form isn’t new to the city anymore — Whole World Theatre and Dad’s Garage are both in their 20s now — Atlantans still aren’t entirely sure what to expect from improv. Dad’s Garage continues to have people call and ask who their stand-up headliners will be. The lack of preconceived notions gifts performers and show creators freedom to try new things.“A lot of times when people think of long form they think of Chicago. Chicago does the Harold and they do it great, but there’s so much other long form out there that’s not the Harold that’s so fun,” says Amber Nash, a performer at Dad’s Garage. “In Atlanta we can do what we want. There’s no one telling us what to do.”The city’s lack of fidelity to the Harold has made space for a lot of weird and wonderful long-form shows. Atlanta is, in fact, doing what it wants. In Kanye Saves Christmas, the Dad’s Garage ensemble creates a horrific scenario that only Kanye West can fix. Village Theatre’s long-running Improv Assholes show mixes short form, long form, and drinking games. In Highwire Comedy’s Shakespeare, Unscripted, improvisers perform an entire show in iambic pentameter. Atlanta’s seen improvised operas, X-Men, action movies, Star Trek, Broadway musicals, road trips, ’80s films, clown movies, and “Twilight Zone” episodes, to name just a few. When Atlanta does do Harolds — a not infrequent occurrence — it’s usually with some sort of twist. Improv troupe Hip Hop Harold, for example, raps the whole thing.The huge variety of shows is a testament to the community’s creativity and internal trust. Improv theaters overwhelmingly look to the ingenuity of their performers to come up with new formats. “Our ideas don’t all come from the top down,” notes, Highwire founder Ian Covell. “We welcome our community of improvisers to submit ideas and we look at the ones we think are marketable and take it from there.”Improvisers talk about long-form improv the way lovers talks about ideal relationships, citing trust and commitment as the two necessary components to make the whole thing work. Long form lives or dies based on performers’ confidence in one another and the overall show. Ultimately, it’s storytelling steeped in community.


“There’s no better feeling than to be supported by other people and not torn down. We’re here to support each other and make each other look good,” says Chip Powell, artistic director of Whole World Theatre. “I think that’s the most important part of what long form brings to an improv community.”