Where to drink at Atlanta's airport

Your handy dandy booze guide for holiday season at Hartsfield-Jackson 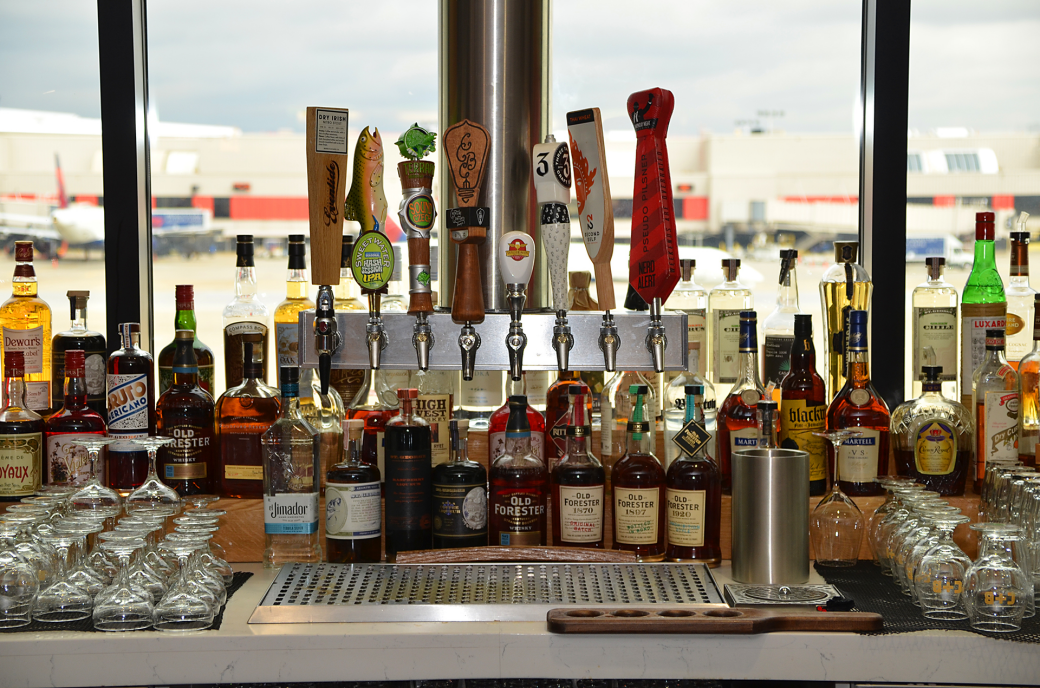 Photo credit:
It's the holidays. At the world's busiest airport. And you need a drink. Hopefully you just want to kick off that vacation with a celebratory cocktail. More likely, winter weather delays have you down, or your nerves are on edge in anticipation of unwinnable political battles over slices of inedible fruitcake with your in-laws. Either way, we're here to guide you to the best bars across the many concourses of Hartsfield-Jackson Atlanta International Airport (ATL to you and me).

The good news is, there are few better places in town for a bar crawl. Don't believe us? At the airport, there's no need to step foot outside, public transportation is fast and free, and the walkways are motorized to help those who might stumble through a field sobriety test. That said, this is an airport, with limited space for bar storage, and most of what's on offer tends to be mass-produced plonk. Sure, mass-produced plonk comes in handy at times like these, but this guide will help you find the diamonds in the potent-potable-rough that is the ATL airport bar crawl.

Pro tip: No matter which terminal your flight is leaving from, if you have time it's worth a quick hop on the subterranean trains to get down to concourses D, E, or F for the airport’s three most legit drinking destinations.

No value assignedDomestic Terminal (Pre-security): Drinking options are limited before you encounter ATL's frequently lengthy security line. Let's just say that Atlanta ChopHouse & Brewery is the best of the bunch if you feel the need to get your drink on before a pat down.

Concourse T: Your best bet in T is Papi's Cuban & Caribbean Cafe, which showcases local Georgia beers and makes a decent enough mojito or a simple Cuba libre (rum and cola). There's also an outpost of Grindhouse Killer Burgers, which has self-described cheap wine (hello white zinfandel!), several beers on tap, and cocktails that don't quite rise to the level of killer.

Concourse A: Come for the superb pizza at Varasano's, but stay for the shockingly well-stocked bar that features great choices in wine, cocktails (like a basil gimlet), spirits (like Fidencio mezcal or St. George gin), and local craft beer (there’s a Three Taverns Belgian-style IPA on tap). They even had a bottle of highly limited Fiddler bourbon from Atlanta's ASW Distillery. Cat Cora's Kitchen has a similarly shockingly-good selection. It is run by the same group that runs Varasano's, but here you can find Cat's signature ouzotini among other cocktail oddities. If you're a smoker, and only if you're a smoker, head down to tiny TAP, a gastro pub and smoking lounge (cough).

Concourse B: TGI Friday's is your best bet in B. Luckily, they usually have a few local beers on draft.

Concourse C: Sweet Georgia's Juke Joint will get the job done, though the Southern shtick is laid on thick.

Concourse D: D clearly stands for Drinking. Way down at the end of the terminal is Chicken+Beer, a brand new Southern comfort food destination from Chris 'Ludacris' Bridges and Jackmont Hospitality (which also runs One Flew South) features eight Georgia-brewed beers on tap, including critical darling Creature Comforts out of Athens and hometown craft favorites like Second Self, Three Taverns, and Wild Heaven. They even have a nitro line, currently featuring Eventide's Dry Irish Stout. The mainly classic cocktails (mint julep, anyone?) and boozy slushies like Old Forester bourbon with fresh ginger and lime are equally enticing. You can also find a decent drink if you choose carefully at Jay Z's strangely out of place 40/40 Club (what?). But really, we all know Luda wins out over Jay Z any time you're in Atlanta. Head upstairs for the Terrapin Tap House, featuring beers from the Athens brewery as well as a smoke lounge offering cigars and hookahs.

No value assignedConcourse E: One Flew South made it cool to eat at the airport back in 2008, and has been winning raves from media (including two James Beard nominations for outstanding service) and travelers from around the world ever since. The original airport concept from Jackmont Hospitality comes with a bar menu designed by Jerry Slater, owner of the recently shuttered H. Harper Station and known for his love of whiskey and way with craft cocktails. The creative but classically-inspired cocktails, sake selection, and surprisingly diverse wine menu all make the ride out to E worthwhile. Keep your eyes open, too, for an excellent American whiskey selection. Bottles of Pappy Van Winkle have been known to appear around release dates.

Concourse F / International: The bar menu at Ecco will have wine geeks wishing their layover was just a bit longer, with three dozen wines by the glass that offer the chance to hop around the world's great grape regions. In a setting every bit as trendy as its Midtown Atlanta sister restaurant, Ecco’s wine list focuses on breadth rather than depth, with a cru Beaujolais here, a chinon from the Loire there, a Napa cab, a Russian River chardonnay, a simple prosecco from the Venetto, and so on. Cocktails, too, strike an international flare, featuring classic old world components like calvados, sherry, and Chartreuse. If Ecco is packed, head over to the nearby El Taco for a frozen mojito or margarita.