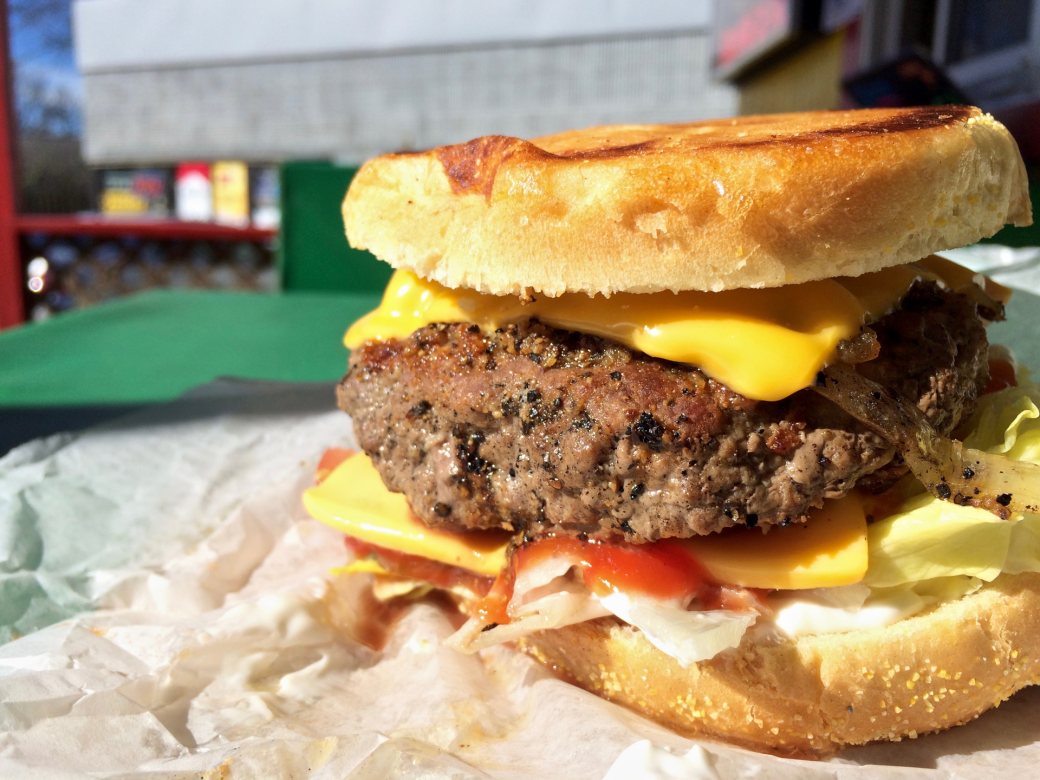 Photo credit:
Today I went to Villa Rica. I've been intrigued by the town's name countless times as I've driven down I-20 toward Birmingham or Memphis, but never enough to pull off the highway. Villa Rica. The name conjures up images of grand haciendas graced with bougainvillea, and views over the hills towards a tranquil sea ...

Alas, there are no grand haciendas, at least as far as I can tell. Nor tranquil seas. The hills are covered mainly in pine trees and the scent of suburbia. But Villa Rica, I now know, does have at least one beautiful oasis that rewards a detour off the highway. That oasis is Jerry's Gourmet Burgers, a brightly painted shack next to a gas station about 45 minutes from Atlanta proper that serves up one of the most satisfying burgers you will ever find.

When I arrived early at Jerry's at 10:30 a.m., I had little in the way of expectations. The place has been open for four years, but is just now picking up buzz in Atlanta thanks to breathless Instagrams from enthusiastic road trippers. I parked on the edge of the gas station lot where Jerry's resides, and took a seat at one of the four outdoor booths under the covered porch, awaiting the 11 a.m. open. The vinyl-covered benches are colorful, though a bit worn around the edges. A few flower boxes adorn the exterior, and according to Instagram photos, Jerry's goes unabashedly tropical in the warmer months with a deluge of potted plants. The noise and fumes from cars idling at the gas station impose a minor nuisance, and, if anything, make you appreciate how out of place this hamburger hideaway seems.

At exactly 10:59 a.m., a pickup truck dropped off a young lady who hopped out and, noticing me waiting outside, paused to inquire how my day was going. She hurried to the back door of the place, and one minute later, opened up the window to take my order. The restaurant's owner (and only other employee) Jerry was inside, working away to get everything prepped for lunch. He peeked out behind the young lady and offered a sincere, "thank you for your patience."

No value assignedThe main reason that Jerry’s is such an inviting oasis is, well, Jerry Ihsan. He positively emanates hospitality, maybe because he knows hospitality goes a long way when you are cooking every burger to order and wait times can easily approach 40 minutes during lunchtime. But Ihsan clearly pours his heart into his little outpost. “I discovered I can cook,” he told me, “and sincerely believe this was what I was put on earth to do. ... I opened this little broken-down trailer and have been so happy in life I can’t even explain it.”

At first glance, there’s nothing extraordinary about Jerry’s burger ($7.49) — a thick patty topped with American cheese, lettuce, tomato, pickles and sauteed onions on a seeded bun slathered with mayo, mustard and ketchup. But when you take a bite, everything changes. That thick patty is incredibly steak-y, generously but simply seasoned with salt and pepper, a veritable umami-bomb of burger. And the meatiness meets its perfect foil in the crisp, cold iceberg, pickles and cool mayo, with tender onions offering a background sweetness, and the ketchup and mustard there just enough to perk things up. Like many mysteriously great dishes, Jerry’s burger seems like it must have some secret ingredient, some happiness-inducing compound that manages to boost it from typical to incomparable. All Jerry would divulge was that it was made from sirloin, freshly ground by a butcher he knows and trusts. “It’s as simple as a burger can get,” he says.


Fully filled, I managed to fend off Jerry’s suggestion that I should try his Philly cheesesteak, but couldn’t resist getting some of his homemade roast beef to go (also destination-worthy — cut thick, well-spiced, with a rich gravy). He also insisted that I try the burger with Swiss. “Next time,” I said. And I wasn’t lying. There will be a next time.
Jerry's Gourmet Burgers. 820 Dallas Highway, Villa Rica. 470-767-3520.