The documentary of the band’s tumultuous U.S. tour finally gets a proper release 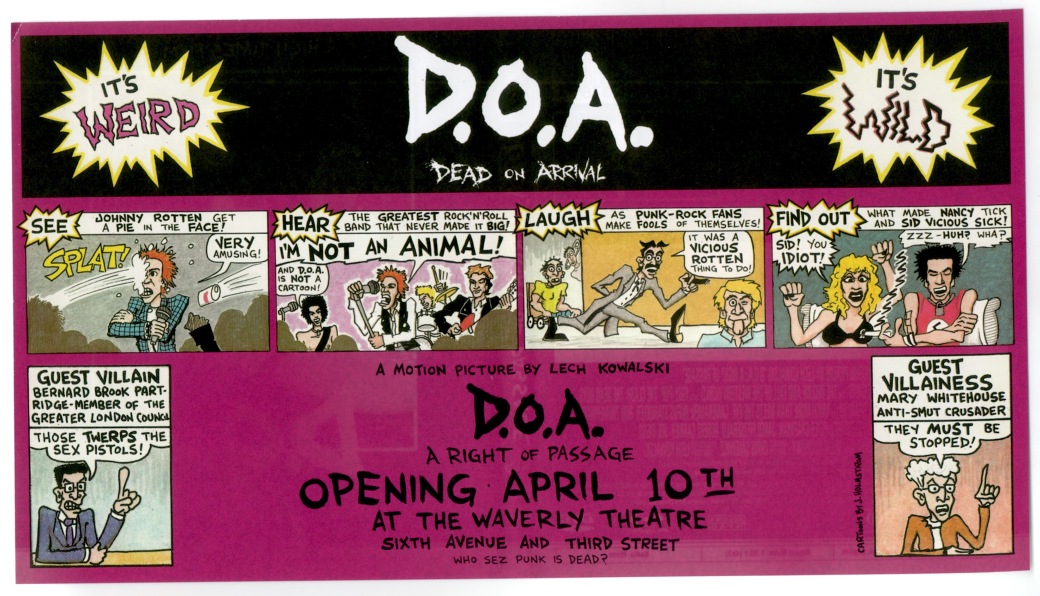 It was 1981 when D.O.A. - A Right of Passage, the documentary film of the Sex Pistols' ill-fated 1978 American tour, premiered in New York. A friend who had moved to Manhattan from Atlanta called me, excited over having just seen it at the Waverley Theater. She described the scenes shot at the Great Southeast Music Hall in great detail and told me which of our Atlanta friends were in it. During its initial theatrical release D.O.A. never made it to the big screen here, but it was finally made available on a limited-run VHS tape some months later. The quality wasn’t the best, the sound not much better, but it did document the tour, seven shows from Atlanta to San Francisco, in all its punk rock glory.

Almost four decades later, D.O.A. is finally available on DVD and Blu-Ray Disc (a Japanese DVD had made the rounds at one time, but it looked to be a shoddy dub from the VHS tape). D.O.A. has stood the test of time well, both for its historical significance documenting British punk rock and for its capturing the candid thoughts of those who saw the Sex Pistols in the moment during that ill-fated tour.

That January night at the Great Southeast Music Hall, a couple of obnoxious guys, one carrying a cumbersome 16 mm film camera and another lugging around a heavy sun gun, were imposing themselves on everyone in the lobby waiting for the show to start. Sticking the camera in people’s faces and blinding them with the bright light. As it turned out, the cameraman was director Lech Kowalski and the light guy was High Times magazine founder Tom Forcade, the director and producer of D.O.A. They had taken it upon themselves to document the tour, and, as intrusive as they seemed — they didn’t get any cooperation from the Sex Pistols nor the band’s U.S. label, Warner Bros. Records — thankfully, they went through with it.

The Atlanta segments, of course, are of particular interest. There are a couple of shots of the late David Barge, the bass player for Atlanta’s Restraints, while he was still in art school; a crowd shot of former CL writer, the late Russell Shaw, looking bemused; quotes from many regulars of the Atlanta club scene, a monologue from then-Georgia State Signal music writer Tony Paris with Wax ’N’ Facts’s Danny Beard looking on; and the Sex Pistols themselves, bashing out “Anarchy In The U.S.A.” (sic) to an excited audience in a club tucked away in the corner of what was then known as the Broadview Plaza Shopping Center at Piedmont Road and Morosgo Drive.

This new release also reinstates footage of the Dynamic Atlanta Cruis-O-Matic, who opened for the Sex Pistols on the historic Atlanta date. Cruis-O-Matic was a cover band that were regular headliners at the Music Hall. Founded by saxophonist/vocalist Jonny Hibbert and guitarist Edward “Mr. Vegas” Tanner, they had gained a large and loyal Atlanta following because of the calibre of musicians in the band — guitarists Tanner and Henry Hibbert (sax man Jonny’s brother), keyboardist Blaire Tanner, bassist Rex Patton, and drummer Robert Schmid — and the fact that, while they played “oldies,” though you didn’t hear the usual Beatles and Rolling Stones covers, but more psychedelic garage rock as catalogued by music archivist Lenny Kaye in his Nuggets collection for Elektra Records. To this day, I still question why they were chosen as the opening act. They certainly seemed the antithesis of all that was punk.

There were other Atlanta bands with more “punk” leanings, and any band performing their own, original material, so it seemed, would have been a better choice. But Cruis-O-Matic got the gig for one simple reason, Music Hall manager Glen Allison asked them to do it.

LAST RITES ADMINISTERED: Sex Pistols documentary resurrected.MVD Rewind CollectionIn retrospect, I also have to ask, who else could have done it? An original band, painted with the broad strokes of being “punk” and “new wave” might have seemed a more logical choice, but the audience would have paid them no heed. Cruis-O-Matic were veterans of the frat party circuit. I’m sure they were used to people throwing things at them, throwing up on them, being drunk and disorderly and paying no attention to them. Of course, Cruis-O-Matic was not going to go gently onto that stage. They asked satirist Darryl Rhoades to join them onstage for one song, “My Boot On Your Face.” Wearing a giant safety pin in his mouth, Rhoades brought along guitarist Marvin Jackson for the song. For most in the audience, it was not amusing. The performance caused Village Voice music critic Robert Christgau to refer to them as “the Shitheads” in his review of the show, but it didn’t matter. They opened the show.

One thing that bothered me seeing the Sex Pistols that night, and continues to bother me every time I watch D.O.A. is, how drummer Paul Cook could play wearing that fluorescent orange and green Never Mind The Bollocks … T-shirt Warner Bros. Records made and distributed at the show. Anyone who has ever tried one on knows how stiff they are brand new, with paint, not ink, being used for the graphics — and even years of washings hasn’t made wearing the shirt any more bearable.

While nostalgia for Atlantans, D.O.A. reminds viewers that the Sex Pistols were not just another band, nor was punk rock just a marketing term. Perhaps the most prescient remarks in the film come from an unidentified Warner Bros. Records executive (probably Bob Regehr, who was instrumental in signing the Sex Pistols to the label), when he notes that the Sex Pistols and punk rock have “changed the face of music for the coming years. There hasn’t been a rock ’n’ roll group to hate in a long time.”

No, there hadn’t, nor has there been, since.

Indeed, the Music Hall’s Allison, who, with his stocky build and menacing looks prompted Johnny Rotten/John Lydon to ask him to accompany the band on the tour as his personal bodyguard — the Sex Pistols were hated that much — returned after the tour to book the first Atlanta Punk Festival at the GSEMH. A two-night event that showcased Atlanta and Athens bands — the Fans, the B-52’s, the Para Band, the Nobz, and the Nasty Bucks among them — the shows marked the emergence of punk and new wave bands as a viable alternative to booking the usual rock, folk, and pop groups that dominated Atlanta stages.

In addition to concert footage of the Sex Pistols shot at all of their U.S. dates — Atlanta, Ga; Memphis, TN; San Antonio, TX; Baton Rouge, LA; Dallas, TX; Tulsa, OK; and San Francisco, CA — D.O.A. also features early footage of the very young members of X-Ray Spex, Generation X, Sham 69, and the Dead Boys, offering a glimpse into the musical movement the Pistols brought to the fore of popular music.

While Kowalski and Forcade were never able to get proper interviews with members of the Sex Pistols while on tour, the documentary does feature the now infamous interview footage of Sid Vicious and Nancy Spungen conducted sometime after the tour, with the two in their bed, Vicious constantly nodding off, only to wake up, time and time again, asking over and over, “What was the question?”

The MVD Rewind Collection release of D.O.A. – A Right of Passage “special collector’s edition” includes the DVD and Blu-Ray Disc of the documentary — both featuring the recently produced “Dead on Arrival: The Punk Documentary That Almost Never Was” — along with a 12-page booklet and fold-out poster. The hi-def blu-ray is remarkably clean and crisp for a film that was never of incredible quality to begin with. Both versions are presented in glorious two-channel mono.

Contact Tony Paris regarding upcoming gigs; noteworthy news, rumor, and innuendo; or, if you just want to say, “Hi,” at cl.highfreqs@gmail.com, as you probably know he doesn’t read messages received on his Facebook account.