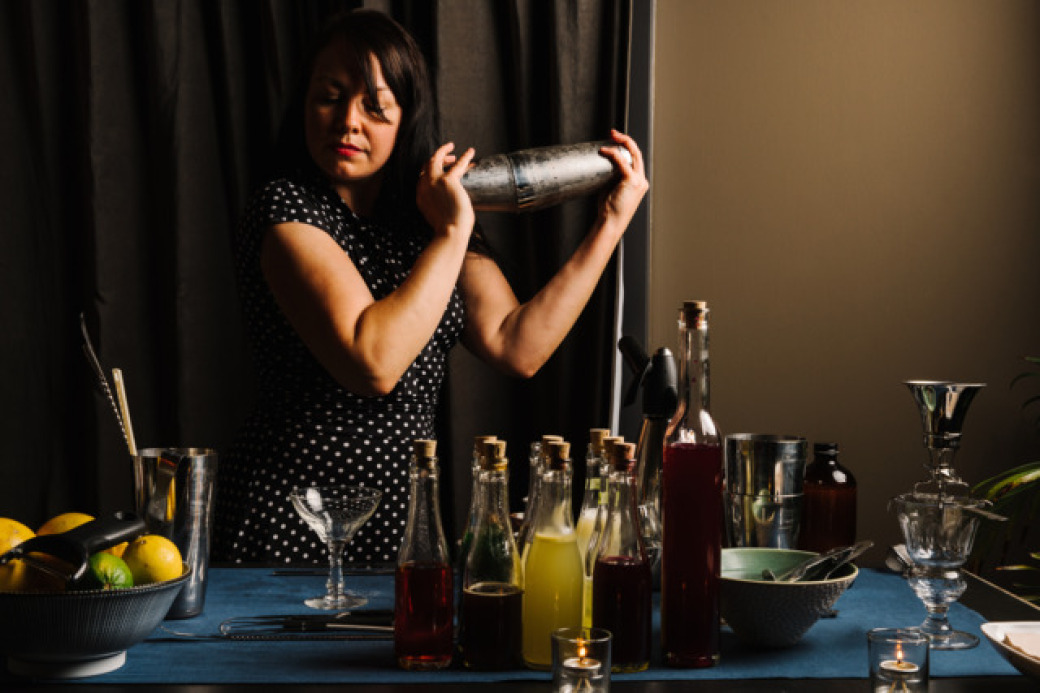 When 1,000 paper cranes are folded as a group, they are known as a senbazuru. According to Japanese legend, the folder is granted one wish upon completion.

Today, the origami cranes are seen as a powerful symbol because of the story of Sadako Sasaki, a young girl who developed leukemia following the bombing of Hiroshima. She tried to fold 1,000 birds before her death, with a selfless wish of world peace.

“Her story stands as an inspiration to all, and a testament to the continued power of the paper crane as a compelling symbol for hope, love, honor, and peace,” says Jen Hidinger-Kendrick, co-founder of Staplehouse and the Giving Kitchen.

But Sasaki’s tale is only part of the inspiration behind the newly opened Paper Crane Lounge, which rests atop Edgewood Avenue’s award-winning restaurant Staplehouse. Dreamed up by Hidinger-Kendrick and her late husband Ryan Hidinger before his death in 2014, Staplehouse is a subsidiary of nonprofit the Giving Kitchen, which helps restaurant workers in times of unexpected crisis.

A beloved member of Atlanta’s restaurant community, Ryan received gifts of a thousand cranes twice during his year-long battle with cancer. Twenty-four hours after he died, a crane landed on top of the Hidingers’ home chimney and perched there for a while before flying off. The bird left the family with a hopeful sign that Ryan was OK. “That’s the crane image I have on my right arm,” says Hidinger-Kendrick, pointing to a delicate tattoo that stretches from elbow to shoulder. It’s from “a photo that Kara Ryan’s sister took of the actual crane sitting on our chimney.”

“It’s an intimate space where people can enjoy a drink with friends at a leisurely pace, kind of circling back to Staplehouse’s early days as a supper club in the Hidinger’s home,” says Flowe. But perhaps the lounge’s best feature is its accessibility. Unlike at Staplehouse, you don’t need to vie for a reservation months in advance; this lounge is made for walk-ins.

The short and sweet menu invites conversation, listing cocktails with a few descriptive words in lieu of their ingredients. Flowe’s Night Vision is “earthy, smoky, mysterious,” the result of an abundance of prickly pears in the kitchen and her “what grows together goes together” philosophy. She added lime for zing, mezcal for earthiness, Cappelletti for depth, and made a tincture from the buds of shiso leaves for a mysteriously purplish hue. Flowe and Davis are happy to take the time to fully explain their creations while guests sip.

“Having a cocktail should never be anything but a relaxing or stimulating experience,” says Flowe. “Jen and Kara created this beautiful warm space, and so many of the little touches people appreciate are Melissa’s. I like to think of Melissa and I being your personal drink shoppers.”

Looking ahead, there are plans to showcase Ryan’s gifted cranes as an installation in the stairwell and in the rafters of the lounge. They’ll stand as symbols of peace and hope for guests and yet another gift to the community that means so much to this team.

Davis is smitten with Paper Crane’s warm and intimate ambiance. “The environment isn’t stuffy or pressuring. We just want to give people insanely good cocktails, and a few esoteric wines and beers. To help guests explore the possibilities of the ever-changing beverage world.”