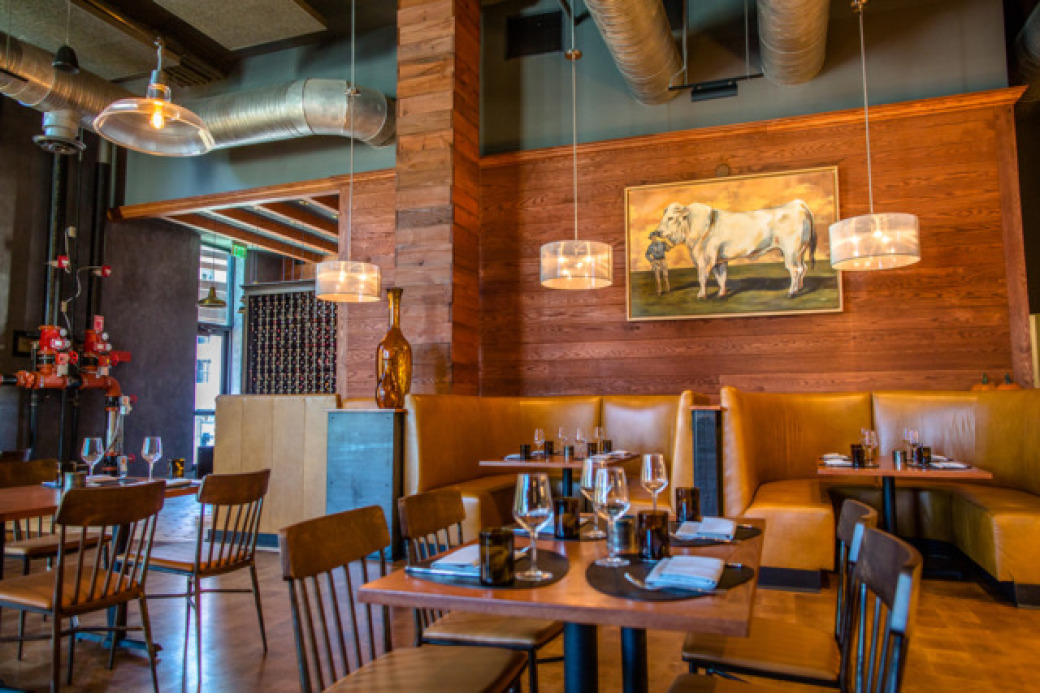 Westside's Donetto doesn't feel like a new restaurant, even though it has only been open since mid-September. Already, there is balletic coordination of Old World rusticity, modern glamour, and thoughtful attention to both the past and the future. Inspired by the simple and robust cuisine of Tuscany, executive chef Michael Perez makes food with care, paying tribute to tradition. "When I think of Italian food, I always think of the love at the table," he says. "Everyone is breaking bread and laughing, there is more food than there is space ... and tons of variety."

Perez and his partners at Indigo Road Restaurant Group began their homage with Donetto's moniker. The restaurant is named for the world's largest bull, which clocked in at a hefty 3,840 pounds back in 1955 and hasn't been beaten since. The bull's Chianina breed, from Italy and one of the oldest in the world, toiled as draft animals for 2,000 years and is now prized for its tenderness in the region's specialty dish, bistecca alla fiorentina.

An oil painting of Donetto in all his enormous glory reigns over the dining room, spacious and airy, awash in browns and grays. It's polished but warmly adorned with natural materials: soft camel-colored leather, slate walls, dangling amber-hued glass, cherry wood pillars and absolutely enchanting woodblock flooring. An L-shaped bar is naturally lit by floor-to-ceiling windows. The building itself dates back to the early 1900s, when it was part of the area's stockyards and meatpacking facilities, supplied by adjacent railroad tracks. The view from the patio is of Miller Union, which is itself named for the stockyard.

Donetto's menu runs from small antipasti selections to hearty pastas (all available in full or tasting sizes), composed entrees, shareable sides and meats for the table. Perez employs Tuscan cooking techniques and applies them to locally sourced ingredients from the South. In his frito misto, okra is the star, served with bagna cauda, a broken anchovy and garlic sauce originating in central Italy.

The four-piece fried rabbit ($33) with dipping sauces is a permutation of a meal Perez had in Italy and the extra crispy and spicy fried chicken buckets he used to pick up at Popeyes in Portland. "It's what I think is great about Italian culture," he says. "Each dish is nostalgic and has the ability to take you back to a memory." With a sly grin, he adds, "I kinda want to serve it in buckets."

Don't resist the bread service ($3). Slices of focaccia come with olive oil and sweet and tart caponata. That butter, though. It's whipped with part of the kitchen's sourdough starter, lending a champagne-like yeastiness that's hard to put down. Grilled romaine with niblets of burrata ($13) is lightly tossed in vinaigrette flavored by basil stems. Burrata ($16) also comes draped in air-thin shavings of zucchini and radish. The plump bundle spills open, softly smoked by a crown of trout roe. Frittelle ($12) is like a savory funnel cake seasoned with black pepper, salty cheeses, and wisps of prosciutto.

And then there's the pasta. Four different doughs are pinched, crimped, and kneaded into various shapes in-house, each with a story your server can share. Parcels of mezzaluna ($18/$26), or "half moons," bear the fingertip marks of their maker and come stuffed with smoked beef and smoke-kissed San Simon da Costa cheese with crispy bits of shallot. Tortelli squares ($14/$22) of creamy potato, provolone, and house-made ricotta are folded, sealed, and tossed in parsley and pine nuts with a slick of brown butter sauce. The filling is meager, allowing the taste of the eggy pasta to come through. Ripiena ($16/$24) bursts with rich flavors of a peasant hunt: quail, hints of smoke, mushrooms, and garlic-tinged jus.

Smoke finds its way into cocktails, too. Try the Smokey Cocchi ($14) made with mezcal. Expertly balanced Negronis are poured on tap. A wine list of over 100 mostly Italian bottles has a couple dozen by the glass, and servers know suitable pairings for dishes.

The menu also includes a lengthy list of Amaros, but don't skip dessert. Like the wine list, there is a little something for every palate. Chocolate budino ($6) with candied grapefruit zest is decadently bittersweet. A rustic apple crostata ($8) comes with a buttery, savory crust of polenta. On one visit, the apples were sweet-tart Mutsu from Mercier Orchard. On another, milder Galas from Ellijay.

Service is as polished as the silver tray holding coffee service. Perez has already honed in on true Tuscan restraint. There is history within Donetto's walls but also prudent sensibilities for the modern day. Much like Steven Satterfield at the restaurant's neighbor, Miller Union, Perez finds a use for every morsel produced during the cooking process: leftover whey from ricotta-making used to cook polenta, beef scraps transformed into sausage. What isn't consumed is picked up by local composting service, Compostwheels. Maybe this little corner of the Westside is the beginning of a tasty hub for sustainability. We can only hope.