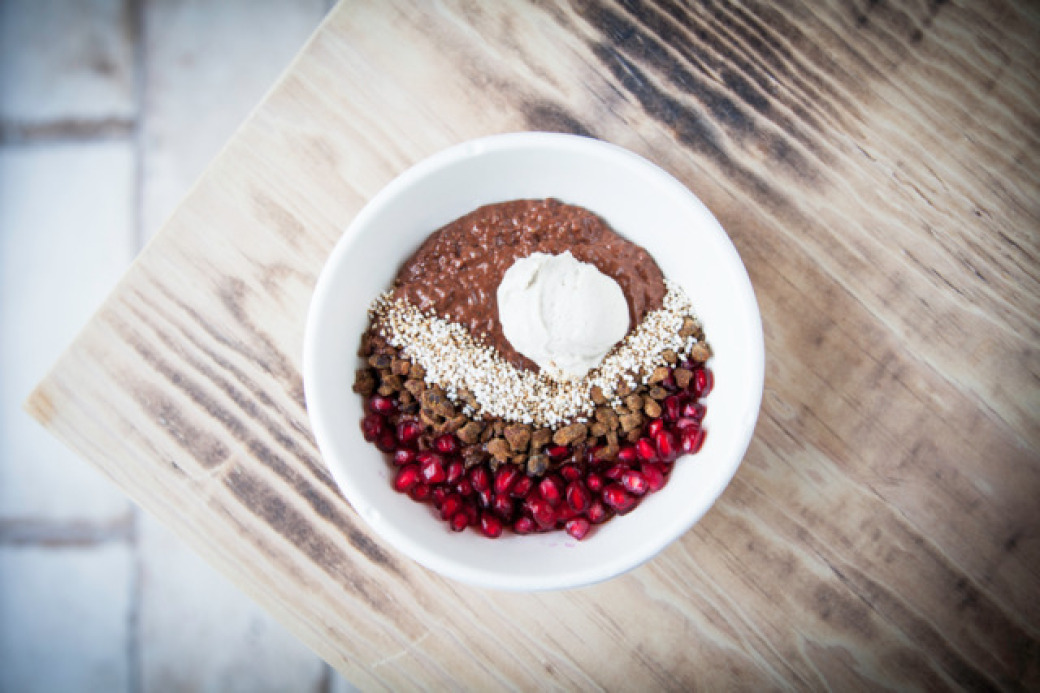 A bright and airy space with wood beams, neutral tones, a meditation room and moms in Lululemon. No, it's not Goop HQ it's SAMA Food for Balance, Buckhead's recently opened fast-casual spot with a menu for the New Age inclined.

SAMA (Sanskrit for balance) is the brainchild of Shannon Salter Sliger, founder of the Gwyneth Paltrow-approved Dtox Organic Juice, which she sold off in 2016. Once a modeling agent in NYC, Sliger decided she wanted to do something more fulfilling with her life after 9/11. So she became a yoga instructor and studied at the Maharishi Ayurveda Association of America.

Ayurveda, an Indian system of medicine that dates back over 5,000 years, asserts that one can't heal one's body without healing one's mind, too. Practitioners believe that we're all made up of the elements of earth, wind, fire, space, and water, and that our individual combination of these elements is referred to as a dosha, of which there are three: pitta (the fiery type), vata (the creative type), and kapha (the laid-back type).

SWEET NOTHING: SAMA has its own meditation room on-site, offering a variety of classes starting at $10.Lindsey Max
Sliger spent years as an ayurvedic wellness consultant in Atlanta. "From your pulse I can see where your imbalances lie," she says. Although she's not a trained chef, she's developed a number of Ayurvedic recipes, and when she realized her clients were struggling to cook, she decided to open a restaurant with an Ayurvedic menu. "Someone who is a pitta may be drawn to spicy foods, but those might exacerbate your anxiousness and anger. So there are dishes at SAMA to aid different doshas."

Despite the menu's Indian influences, Sliger insists that SAMA isn't trying to be in an Indian restaurant. Instead she refers to its ethos as "East meets South," a fusion of her Alabama upbringing and the warming spices of the East. Her grandmothers cooked for her every day as a child, and while she doesn't prepare foods the way they did (butter isn't very ayurvedic) she does pay tribute to them by incorporating Southern produce like squash and kale. The classic country refrain, "Hey good lookin', whatcha got cookin'?" seems out of place painted on restaurant's wall, but it's a tribute to Sliger's grandfather, who used to sing the song to her.

Andrews Square, where SAMA resides, has a big parking lot, but you'll likely need a stint in the meditation room by the time you've found a spot it's a bit of a cluster at peak hours. Pop by during lunch and you'll see the place bustling with moms and young professionals. Not exactly soothing, but the ambient beats pumping through the speakers try their best to zen you out. Kind of like a hippie Chipotle, lunch bowls are ordered at the counter and built as you move down the assembly line.

Create your own bowl or keep things simple (and the price down) with one of the pre-designed "balance bowls." The Paleo ($11) offers a combination of finely chopped cauliflower rice, turkey meatballs, shocked spinach, squash with leeks, coconut marinara sauce and cashew "green dream" dressing, a thick dollop made zesty with garlic, shallots, lime, and cilantro. The turkey meatballs lacked seasoning, but the coconut marinara, made with coconut cream, was rich and tangy, complimenting a fragrant blend of turmeric and coriander. The squash and spinach didn't have as much oomph as their bowl buddies but were fresh and certainly quite healthy.

CREAMY DREAMY: Mushroom mylk, turmeric, honey, ginger, black pepper, and turmeric tea make for a soothing blend in the Liquid Gold latte.Lindsey Max
Breakfast is a bit calmer at SAMA, and has thus become my favorite time to visit. There are six "brekkie bowls," each with a combination of creamy and crunchy textures. The Power Up ($8.50) arrives with base of thick chocolate chia pudding and a decadent scoop of cashew cream, pomegranate seeds, cacao nibs and crunchy amaranth on top. If chia pudding isn't your jam, try the CocoNutty Morning ($10) with its base of coconut yogurt and an adornment of coconut granola, hazelnut crunch, maca mesquite syrup, and pineapple. Each bowl I tried looked small, but by the time I got to the halfway point I was wondering if I'd be able to finish it (fear not, I managed).

Maca mesquite tea latte ($5) is a must-try, made with pu-erh tea (a fermented black tea that Sliger describes as coffee-like but with more health benefits), vanilla almond "mylk," and maca mesquite powder. The flavor is earthy with a tinge of caramel, and Sliger later informed me that maca, a Peruvian superfood similar to ginger and turmeric, boosts your libido and is good for your hormones. Score!

CAVEMAN APPROVED: The Paleo bowl has finely chopped cauliflower rice, turkey meatballs, shocked spinach, squash with leeks, coconut marinara sauce, and cashew “green dream” dressing.Lindsey Max
You can't talk about SAMA without mentioning the meditation classes ($10 the first time and offered in varying packages after that). The practice is trending in Atlanta, this may be the first time you'll find it in a restaurant. Sliger teaches an ISHTA meditation class on Wednesdays (think visualizations and mantras), but I attended a sound bath meditation class with instructor Ashley Chase and ... wow. The class is 45 minutes long, divided between mild stretches and an auditory feast. After warming up, I grabbed a couple pillows, stretched out, and let Chase carry me away on the waves of sound emanating from singing bowls. For 30 minutes the sounds washed over me (get it?), the din of the restaurant just outside the door fading away. After class, I floated back to my car feeling more serene than I ever thought possible in Buckhead. Then, Atlanta traffic rudely snapped me back to reality.

SAMA won't be everyone's cup of tea. Because it's ayurvedic, the food errs on the blander side, and some might be rubbed the wrong way by a restaurant that monetizes ancient Eastern practices. But for those seeking a healthy alternative to the typical breakfast and lunch options, it's a welcome addition to the neighborhood and a place to find some much-needed peace in the middle of a busy city.