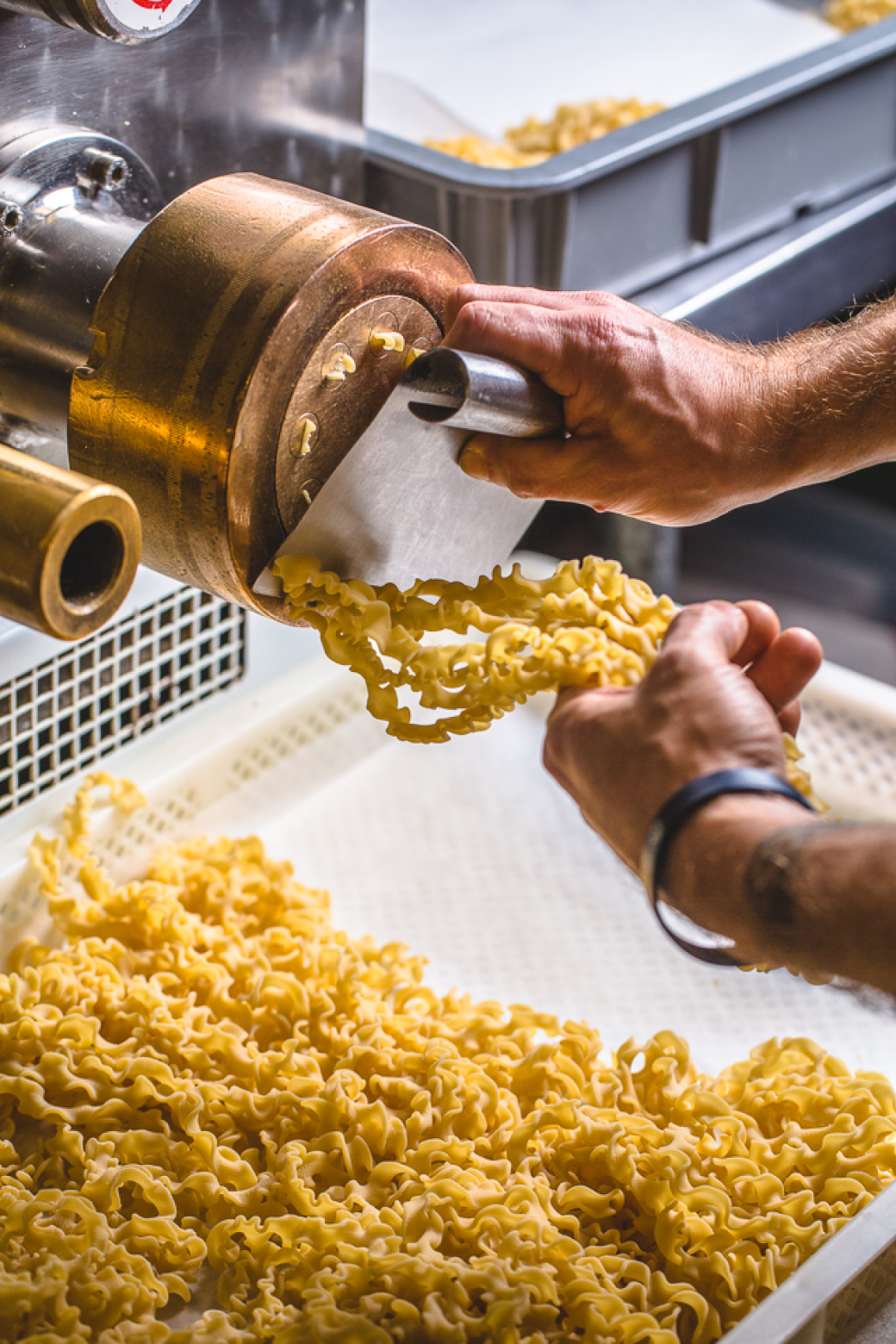 Bruce Logue is really into Edelweiss. No, it’s not a Sound of Music fetish or an obsession with dipping his toes into alpine flowers. Edelweiss is the name of Logue’s new pasta extruder at BoccaLupo, the restaurant he runs in Inman Park. In his words, “It’s gangster shit.”

If you’ve been to BoccaLupo lately, you may have noticed that the tasting menu is sporting some pretty eye-catching new pasta offerings. One evening it included thin strands of angel hair worked into dough and fried like rice stick — a dish exemplifying Logue’s expertise in textural management. On a recent visit, he showed me a tangle of the golden strands and spoke excitedly about his newest acquisition: a decades-old Italian pasta extruder.

Peek into the kitchen and you’ll see it: a refurbished relic dating back to the 1970s, standing in the middle of the pasta prep area. The surprisingly compact appliance shines with brass and steel. There are no digital components. It’s all dials and cranks. “The old technology is where it’s at,” says Logue.

Old technology typifies BoccaLupo’s pasta program. Across from Edelweiss, candle-shaped garganelli gets rolled over a ridged wooden board, as it’s been done for centuries. Just flour and egg, human hands, and wooden tools. The extruder does not replace this method, but it does switch out dried pastas for fresh ones.

Logue demonstrates, using 100 percent Semolina flour because it’s “really hard and high in protein.” He includes egg whites (“pure protein”) in the three to one ratio of flour to water — with egg white serving as part of the “water.” While the extruder has the capacity to mix dough, Logue opts to use his Hobart mixer instead, adding dough to Edelweiss in small batches. An auger forcefully pushes the dough through an opening in a perforated plate called a “die.”

“It’s simple, but a lot can go into it,” the chef says, without looking up from his work. The bronze dies make the pasta shapes coarse, similar to dried pasta, and the fresh nature of the dough maintains flavor and resilience. To really simplify this scenario, just imagine a larger version of those Play-Doh Fun Factory tools you used to play with as a kid, squishing out long shapes of soft, pliant dough.

Mafaldine, a flat pasta with a curly edge, emerges from multiple holes in the die. Logue cuts a handful and throws it back into the machine. “You don’t take the first stuff,” he says. When the ribbons are about 12 inches long, he cuts them and leaves them in portioned mounds on a drying tray.

As it dries, the pasta creates a little crust around the outside. “But if you dry it too much, it would be too brittle,” says Logue. It’s labor-intensive culinary art. Someone has to run the machine, cut the length, portion, and bag the servings. Most restaurants use dry pasta that they blanch ahead of time, then “re-thermalize” to order. Pasta sauce interacts differently with the extrusion method. The craggy noodle grabs the sauce and tends to thicken it a bit. The result is more ethereal.

Logue has three new dies for the aforementioned mafaldine, angel hair, and corkscrews of fusilli. The curly edge of the mafaldine appears due to a rotation within the intricate insides of the die. It’s cut at an angle so they twist. One die can make different shapes and lengths depending on when the pasta is cut from the form. Tiny anelli, which look like the rubber bands kids with braces need to keep their jaws aligned, wait in portions in the pasta drawer. Try to imagine how quickly one must react to cut such bits from the die. “It’s like precision stuff,” Logue says.

Despite the work that goes into it, the extruder is a timesaver for an a la carte restaurant. “We cut our cook time down to, like, five minutes,” Logue says. Dry pasta, on the other hand, cooks for seven to nine minutes, depending on its shape. Edelweiss changes the choreography of the kitchen, improving productivity. It’s also a precise and consistent technique. And for Logue, clearly, it’s a whole lot of fun.

Once the mafaldine is ready, Logue cooks it up for us to try. It has a silky texture and a springy bite — a different kind of al dente that’s not as pronounced. More pasta specials will soon roll out as Edelweiss’s offerings are added to BoccaLupo’s tasting menu. For Logue, the extruder is but another complicated-seeming step toward a very simple mission: the same one that has driven him from day one.

“It’s all about getting a good noodle,” he says. And so it is.