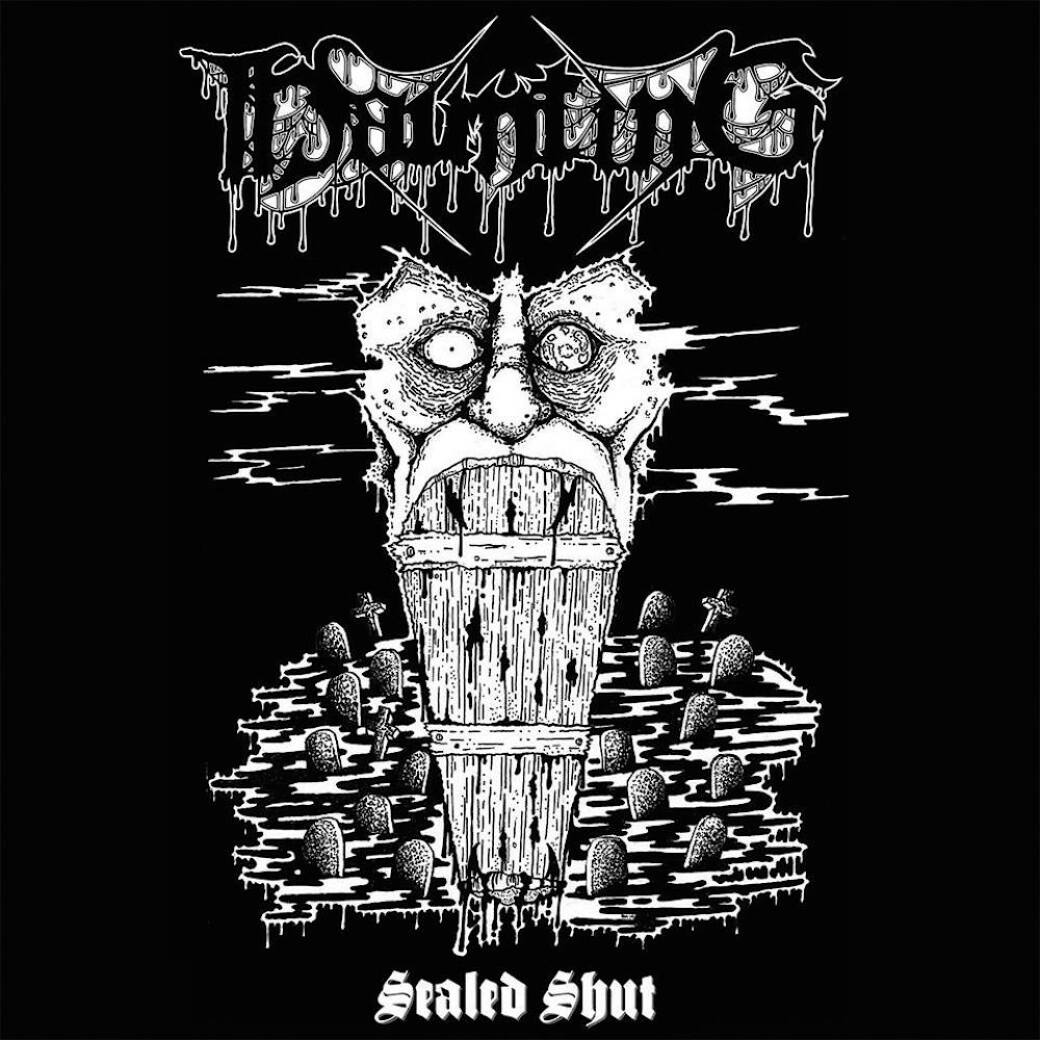 Few recordings resonate within the ears and blackened hearts of Atlanta’s post-aughts metal scene with as much wicked primordial ooze as Haunting’s Sealed Shut EP. When the group originally released its obscure four-song cassette tape in 2014, drummer and principal songwriter David Prae, guitarist Charlie Southern, bass player Blake Packard, and singer and guitar player Scott Taysom stamped in time an era of great change for Atlanta metal. The high tide of 2012’s metal boom had receded, and while bands such as Mangled, Disfigurement, Vimur, and Hellgoat had set a precedent for just how much a local metal band could commune with the dark side, young blood was spilling into the scene. Bands like In Ruins, Living Decay, and Sadistic Ritual injected a renewed punk, hardcore, and thrash energy into their headbanging riffs, and a more benevolent death metal assault was born of blast beats and blasphemy.

“Haunting was a band that I just kind of walked into,” says Taysom. “I knew David, who was playing in Living Decay. We became close friends when I was dating someone who lived in the same house as him, so I was there a lot. One day he said, ‘Hey let’s do this.’ So I sat down and just did the guitar that turned into what you hear on the recording,” Taysom says. “I sang his lyrics. The riffs were Charlie’s and David’s.”

Haunting quickly took shape amid Atlanta’s gruesome underground metal scene, but the band was short-lived. To the best of anyone’s recollections the group played only about five shows before dissolving.

Four years later, Prae now lives in Denver, Colorado. Southern is shredding full-tilt in Sadistic Ritual, Packard plays in an Iron Maiden cover band dubbed Maiden Killers, and Taysom is touring the country fronting the band Cloak. After releasing 2017’s To Venomous Depths LP (Season of Mist), Cloak is poised to claim the throne as Atlanta’s next metal kings, giving death metal a rock ‘n’ roll makeover. But the benevolent power of the Sealed Shut cassette is still rattling the pillars of hell, demanding to be heard.

Songs with titles such as “Beyond Death,” “In The Mist," and “Buried In Misery” are teeth-gnashing hell rides of visceral, full-throttle hatred and murderous contempt. The title track takes shape as a truly perverse anthem, spewing demonic malevolence as Taysom roars, “I feel nothing for you,” before running through a litany of his outlandishly evil intentions.

The song is heavy as hell, and its D.I.Y., old-school death metal origins push it far away from the more expansive qualities that Taysom has honed with Cloak. Still, despite the group’s brief time spent playing together, Sealed Shut refuses to be silenced. On May 8,the music will howl once again, as Boris Records gives the album a slightly expanded, proper vinyl release.

“A re-release of Sealed Shut is more like a dessert than anything else,” says Boris Records co-owner Chris Hood. “Haunting was a truly transient force, lying in a vacuous haze somewhere between the Dark Descent pressings of Living Decay and the Season of Mist offering from Cloak. Despite Sealed Shut’s quality and success, it had no distribution due to its short-lived nature. That's why we re-released it.”

Drop a needle on Boris Records’ single-sided vinyl repress of Sealed Shut, and before the onslaught of searing, distorted riffs fill the air, a spine-chilling intro sets the mood with a fugue-like moment of drum machine and synthesizer sounds. It’s a brief prelude that sounds as though its creeping melodies could have been lifted from the soundtrack to John Carpenter’s Halloween.

The intro comes courtesy of longtime Atlanta music fixture and film score composer Ian Deaton, who has since co-written scores for films such as 2016’s The Arbalest, and 2017’s The Theta Girl.

As Deaton recalls, the idea behind the opening music, which he titled “4th of July Weekend on Lake Lanier Island,” was born one night in a Return To Eden health food store where he worked with Taysom and Prae. “They knew I did synth stuff and said they wanted a late ’70s/early ’80s type of horror film theme for their live show — like something to use as an intro before their set began,” Deaton says. “I imagined it being the theme to a holiday slasher film,” he adds. “I came up with a story about a black-gloved killer loose on Lake Lanier Island on a 4th of July weekend.”

The song was recorded in Deaton’s bedroom in Reynoldstown, and, until now, has remained unreleased — heard only by the audiences who attended the handful of shows that Haunting played live.

Perhaps it’s the obscurity, and the fleeting nature of Haunting’s very existence, that gives the music some of its power. The group thrived in a transitional moment for Atlanta metal, and could have gone only so far.

“After so many years in music, I’ve almost returned to my roots,” Taysom says. “When I was a kid, I wanted to play big stages for a lot of people, but when I got into punk and hardcore, I wanted to play for this scene, and the people I knew. Now, I’ve been doing this for so long that I want to play for people — a lot of people —and I’m not afraid to say that I want my band to be successful, and I want the music to leave a mark.”

It’s a sentiment that Hood of Boris Records reiterates when he says: “Haunting was the pure and singular worship of death. Sealed Shut is altogether free from the fantasy slashing and thrashing of Sadistic Ritual and the mystical spiritualism of Cloak. The group evoked a powerful sound that came from somewhere between those two bands while remaining totally uncompromising in its power and force and utterly dark atmosphere.”

Sealed Shut boasts songs that were created with no commercial aspirations whatsoever. With that kind of freedom comes an unrestrained creativity that can never be planned or repeated; only exhumed and revered.