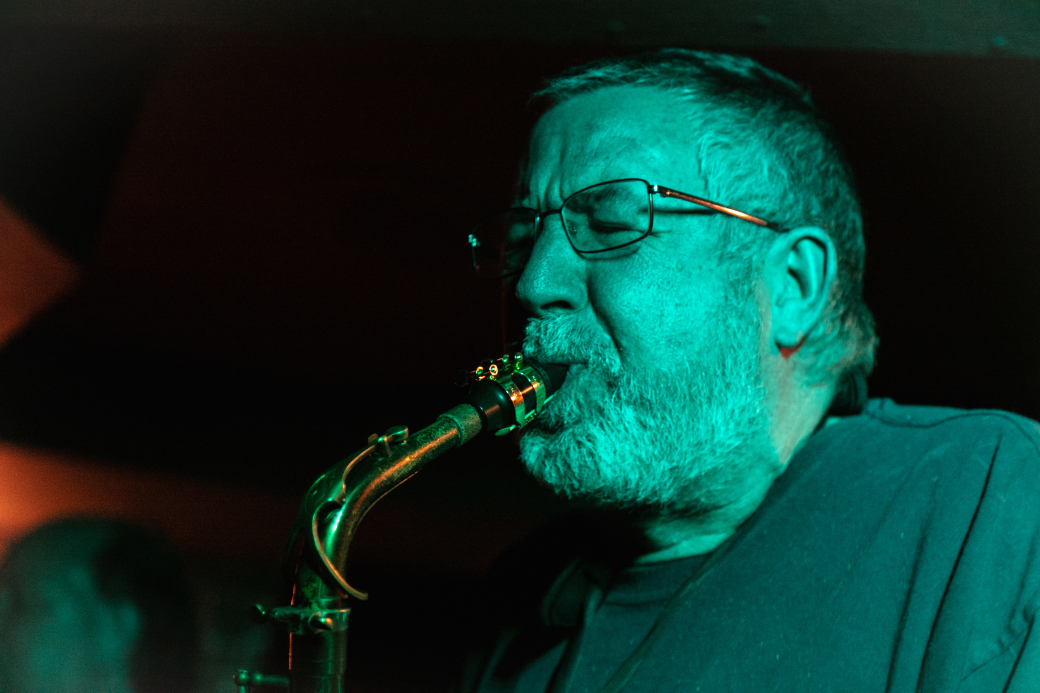 Although the details have faded with time, Jeff Crompton’s parents used to tell stories about how, when he was a young child, he refused to go to bed at night until they’d play the song “Cool Water.”

It’s a downright mystical campfire classic from 1941, sung by a group called the Sons of the Pioneers. Crompton laughs about it now, and dismisses the record they’d play for him as “just a corny old cowboy song.”

He recounts his hazy recollections while shuffling through a handful of avant-garde jazz and modern classical LPs he picked up the day of the interview at Wuxtry and Ella Guru Records in Decatur — records with sleeves boasting the names of such 20th-century creative music pioneers as John Cage, Lukas Foss, and David Tudor in bold black letters.

On the surface, “Cool Water,” a cautionary tale about staying focused in a world filled with distractions, is a far cry from the austere, abstract substance of the records he holds more than a half-century later. Likewise, the structured improvisational aesthetics that Crompton has honed as an adult seem light years removed from his childhood affinity for the singing cowboy group. But a good psychiatrist might have more to say about how repeated exposure to the Sons of the Pioneers’ majestic harmonies and immaculate musical arrangements at such an impressionable age has affected him later in life. After all, the Sons of the Pioneers were born amid the Great Depression, when countless Americans were pushed to the brink of emotional and economic ruin; their lyrics conceal parables behind colorful spiritual symbolism. These same elements resonate within Crompton’s music in ways that are both subtle and overt.

Music is a lifelong obsession for the alto saxophone player. Crompton has spent decades writing, composing, performing, and teaching music, which has shaped his personal identity as well as his professional career. As he prepares to celebrate his 60th birthday this year, Crompton is still excited about unlocking new doors in life through music. The last two years have witnessed a flurry of live performances and new releases bearing Crompton’s name. His spirit, stride, and motivation are in sharp focus, now, more than ever before. The catalyst that fueled this recent burst of productivity struck like a thief in the night.

In 2010, after Crompton had spent nearly 30 years teaching band — beginning at Hapeville High in 1982, and later moving on to Dolvin Elementary in Alpharetta — Fulton County cut funding to elementary band and orchestra in public schools, forcing the music teacher into early retirement. The silver lining, though, was the fact that Crompton had worked long enough to retire with a pension. “I was miserable for about a year, and then I had a realization: ‘Wait a minute, I can write music and book gigs now, and do all of the stuff I never had time to do,” Crompton says. “That’s when music really started taking off for me.”

Over the years leading up to his retirement, Crompton was active in Atlanta’s jazz and creative music communities, a membership that began early. In 1970, when Crompton was 12, his parents moved from their home in Tucker, Georgia, to live in the remote borough of Alpharetta. It was there, during a PTA meeting, that the grade-school band director approached Crompton’s mother to ask if her son wanted to join the band. “I said yes! I want to play saxophone,” he recalls.

Years later, Crompton earned an undergraduate degree in music from the University of Georgia, and took home a masters degree in music education from Georgia State, while gigging around Atlanta. “I was teaching at school, and playing at night, but I kept writing my weird little tunes without anybody to play them with me.”
Soon, Crompton found out about a weekly jam session at bass player Ben Gettys’ house. “I started going and meeting people who wanted to do something besides rock ’n’ roll or straight ahead jazz, something off-center,” Crompton says.
In the early ’80s, he responded to a classified ad in Creative Loafing that led to a gig with longtime rock fixture and comedian Darryl Rhoades. Crompton appears on Rhoades & the Mighty Mighty Men From Glad’s 1986 LP Better Dead Than Mellow. Over time, he appeared on six of Rhoades’ recordings. He also collaborated with pianist Michael J. Smith, and served as one half of the Bazooka Ants, a funk-inflected free jazz trio with Gettys playing bass alongside drummer Tim Nash.

In the late ’80s, Crompton began collaborating with guitarist Rob Rushin. In 2004, they formed the duo RoboCromp, and two still play together, concocting what Rushin calls “chamber fusion for the new millennium.” The music is austere but freewheeling. Between songs they crack jokes at each other before locking into a sophisticated and spontaneous musical back-and-forth. Each song is an ecstatic vision of jazz that’s partial repertoire, and partially realised in the moment.

Composing music that leaves room for improvisation is an aesthetic that Crompton has honed with other groups such as the Edgewood Saxophone Trio, Three Way Mirror, and the Jeff Crompton Trio. Through each performing unit, Crompton has established a formidable presence amid Atlanta’s underground jazz and outsider musical communities. He draws influence from avant-garde titans as much as he does from the Deep South’s phantasmagoric history. “When I was learning to play jazz I became obsessed with where this music came from,” he says. “I read everything I could, heard every recording I could, old field recordings and all that. I’m into the origins of jazz and blues — definitely obsessed.”
His 2016 7-inch, “Tutwiler Depot” b/w “King Oliver in Savannah” delivers a swinging one-two punch that recreates the Mississippi train station where W.C. Handy first encountered the blues. The flip side is an impressionistic recreation of one pie-eyed night in the tragic life of the early 20th-century band leader.
Despite his staggering abilities, Crompton also possesses a self-effacing humility — in conversation, he’s visibly uncomfortable answering questions about himself (though he opens up after a few minutes). He’s also aware that the brand of music he pursues — jazz, blues, and modern composition — isn’t an easy sell to young audiences. “I know the value of what I do, and I’ve seen growth over the last five or six years,” Crompton says. “I like to think I’m pretty good, but I know it’s not really anything most people are interested in.” 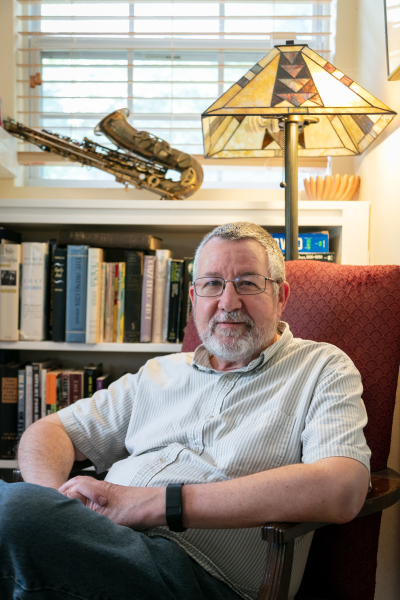 Persistence, however has gained him both recognition and respect in Atlanta. “Maybe I’ve worked myself up to the ‘big fish in the small pond’ place,” he laughs.
Since 2016, Crompton has turned out more recordings than at any other time in his life. Each new offering is fueled by writing and collaborating with an extended family of forward-thinking and experimental artists, including Bob Stagner and Evan Lipson of Chattanooga, Tennessee’s Shaking Ray Levis and Las Cruces, New Mexico-based trombone player Peter Sloan. In 2018, Crompton released a Three Way Mirror CD, New Normal, RoboCromp’s The Good and Bad Angels 7-inch, and has an opera in the works, based on the life of Buddy Bolden, who’s said to be the first jazz musician. “There’ll be five scenes,” he says. “I don’t know what’s gonna happen with it but I’ll do everything I can to produce at least one performance of it. And it’s not like classical music, it’s stuff the Saxophone Trio plays.”

In March, Crompton joined improv act Duet for Theremin and Lap Steel as part of the 12-hour drone performance at the Big Ears Music Festival in Knoxville, Tennessee. He also appears on the song “Absinthium” from the group’s latest album, 10. Lap steel player Frank Schultz recalls their recording sessions: “We had an amorphous, abstract sound that was kind of a blob, and we sent it to him and asked, ‘Do you want to play to this thing?’” Schultz says. “He come over here with a clarinet and an alto sax. I don’t know how anyone could listen to it and come up with anything. He recorded a clarinet part, and he recorded a sax part, which were totally different. We listened to the sax part, then the clarinet part — they were okay. But then we played both the clarinet and the sax at the same time, they fit together perfectly, there was no changing anything. They wove together so beautifully that my jaw dropped,” Schultz adds. “It was an accident that we put them together, but it was no accident. That’s how his mind works.”