Mammal Gallery and Eyedrum face the end of an era 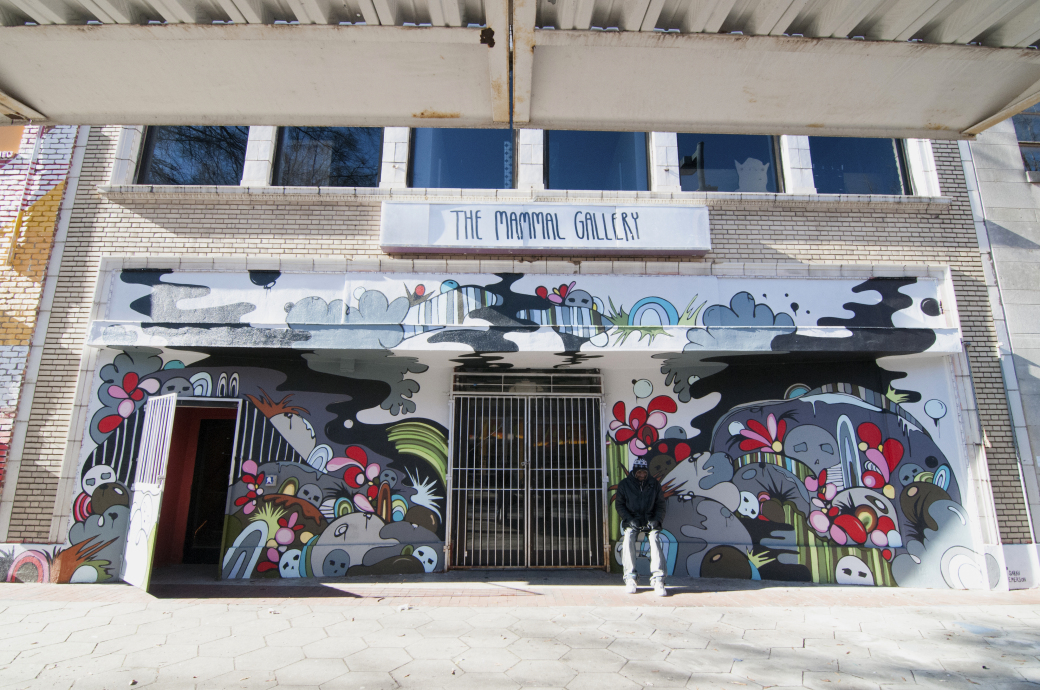 On Saturday, May 19, Mammal Gallery hosted one final party on South Broad Street. It was a farewell to the four-year legacy that co-owners Brian Egan, Chris Yonker, and Dan Dewberry kicked off in 2013, when they took over the building at 91 Broad Street S.W.

Since February, Mammal has been hosting shows in a satellite location across the street in the HL Green building, after their landlord, development firm Newport Holding, forced them out following a deadly fire nearby.

For the May 19 party, Salsa Chest and Floral Print played music, and works by Dewberry and artist Lauren Barfield lined the walls. The night ended when the band Visitors set up in the lobby of the original Mammal Gallery. Flowers crowded the doorway, as partygoers converged outside to watch the show. But this may not be the end for Mammal on Broad Street — not entirely. “We’re trying to facilitate an art gallery down there, which will keep the name,” Yonker says. “It’ll be in a different building, though I can’t say which one yet.”

Trouble began on February 4, after a deadly fire nearby raised concerns about the safety of Broad Street’s decades-old architecture.

Neighborhood DIY galleries/venues were closed after the fire, which left one man dead. Mammal and nearby Eyedrum Art & Music Gallery were forced to remain shuttered, but believed Newport would help bring their spaces up to code and resume business. Instead, during a March 2 meeting, Newport said repairs would cost far more than anyone anticipated. Both venues were to vacate their respective premises.

Mammal was to move out immediately; the event space’s owners couldn’t afford the six-figure sum that Newport says is needed to repair their building. Newport quoted Eyedrum upwards of $1 million to bring their Forsyth Street building up to safety standards, and gave them till the end of April to leave. Neighboring DIY resource center Murmur and the Broad Street Visitors Center recording studio were allowed to stay.
According to Egan, Mammal has until October before Newport begins renovating the satellite space for the next tenant. Eyedrum is shopping for a new space. “Nothing’s been totally found yet, but we do have prospects,” says Eyedrum’s treasurer, film committee co-chair, and tech committee chair Neil Fried. “It’s more than likely that we’ll need to find a different neighborhood.”

Spaces such as Railroad Earth, the M. Rich Building (which houses CL), and the Bakery are currently facilitating Eyedrum events, but it’s likely the displaced galleries and their Downtown counterparts will have no choice but to move elsewhere.

“We’re hoping to open a new performance venue later this fall or winter,” Yonker says, but admits they’re looking outside the area. “We’ll still have ties to Broad, but it’s becoming increasingly difficult to exist there. There are so many movies being shot — there are a lot of cooks in the kitchen. It’s not really our desert Island any more.” -CL-