The Atlanta rapper is preparing to take over the summer 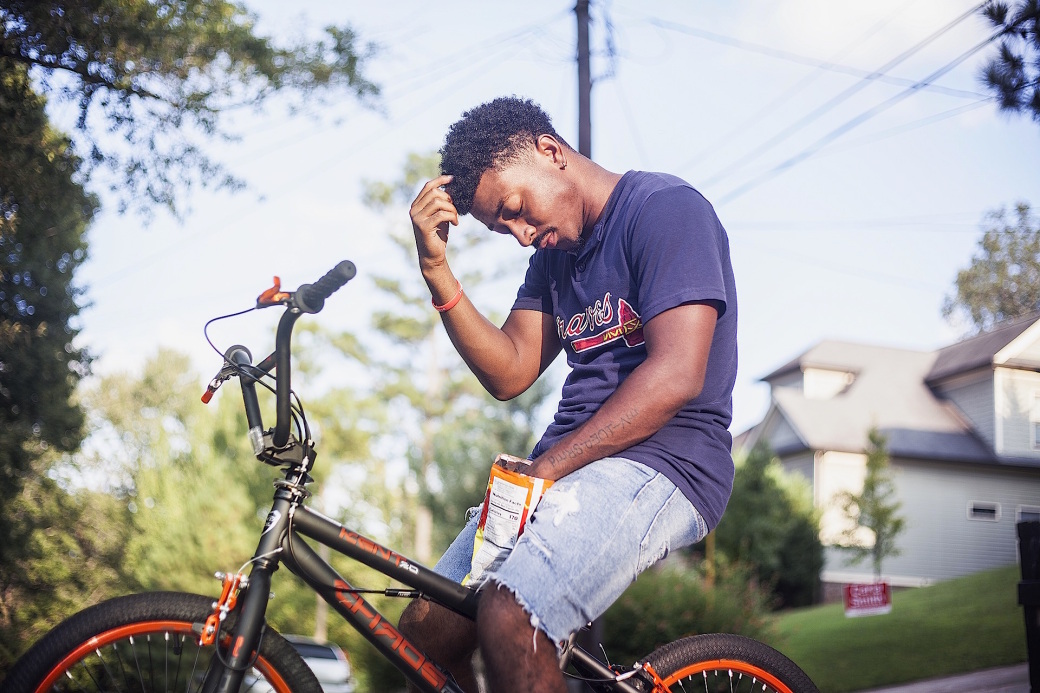 The first time I met Deante Hitchcock in person was at the listening party for St. Beauty’s Running To the Sun. Hitchcock, who’d secured a spot on the album rapping a verse on the seductive “Tides,” wasn’t tucked behind the DJ booth. As St. Beauty and the Wondaland crew stood alongside Janelle Monáe, quietly and proudly listening to the fruits of his labor, Hitchcock was in the crowd dancing and eliciting cheers.

This wasn’t the type of dancing that rappers such as Dem Franchize Boyz became famous for incorporating into their music in the early 2000s, dances that involve a few simple moves and can be done by even the rhythmically challenged. This wasn’t the Bankhead Bounce. Hitchcock was spinning on the floor, breakdance-style.

I asked the 25-year-old rapper about this moment when I met with him recently at Hodgepodge Coffeehouse and Gallery in East Atlanta. Trying to down several gallons of water and recovering from a night of celebrating a friend’s birthday with shots, he said he had no recollection of that moment at St. Beauty’s release party. He blamed Hennessey. But he also said what I observed was indicative of how he is at most parties: “If I’m lit, I’m probably dancing.”

An RCA Records-signee, Hitchcock’s talent and the support he’s garnered suggest he’s on his way to becoming one of Atlanta’s next stars. But for now, he’s still grinding, like many of Atlanta’s most creative artists on the cusp of greatness. When we met up, he’d just returned from Washington, D.C., where he was filming a video with labelmate Goldlink. RCA is gearing up to push “Wide Open,” a track that samples Maxwell’s “Bad Habits,” as Hitchcock’s first big label release. Hitchcock describes it as a love song that “isn’t corny.” The video is scheduled for a summer release.

“Wide Open” comes from 2017’s So Much for Good Luck EP. Released last October, the project shows off Hitchcock’s range as a rapper and finds him reflecting on his struggles just as much as he brags about his success. “Thinking back when I lived with my mama /  hold up wait I still live with my mama,” he raps on “Ascension.”

Hitchcock lived near Greenbriar Mall until he was around eight years old. He spent most of his childhood in Riverdale and credits the area with developing his love for everything from drawing and dancing to skating. As a kid, he was more interested in going to Sparkles Family Fun Center than going to the studio. Around this time, though he was inspired by artists such as Soulja Boy to take up dancing, Hitchcock says he had no interest in rapping until his uncle put him in a group called the Tainted Clique at the age of 11. He started out as a face for the music, rapping the words written by his uncle. It wasn’t until he was discovered on Instagram by RCA executive Mark Pitts that his career began to take off. While participating in the #SoGoneChallenge, where stars such as Chance the Rapper revitalized a throwback Monica hit, Hitchcock, rapping about Black Lives Matter, caught the attention of rap fans and industry leaders. He says it took two messages from Pitts before he believed he wasn’t being trolled.

“I went to his page and he had a lot of followers. I thought someone was trying to play me so I didn’t answer,” he says. “[When I finally answered] he had us on a plane within a week or two to New York.”

As mainstream Atlanta rappers dominate the trap sound, Hitchcock is looking for a way to showcase his various interests artistically without coming across as inauthentic. He hopes his music can reflect his love for artists such as J. Cole and Kendrick just as much as his appreciation for rappers like Young Thug. He wants to rap about real life issues, but he also wants to dance and make club music. “I want to do both,” he says, before stopping to correct himself. “Fuck what anybody is talking about, I’m going to do both.”