HIGH FREQUENCIES: Give the people what they want 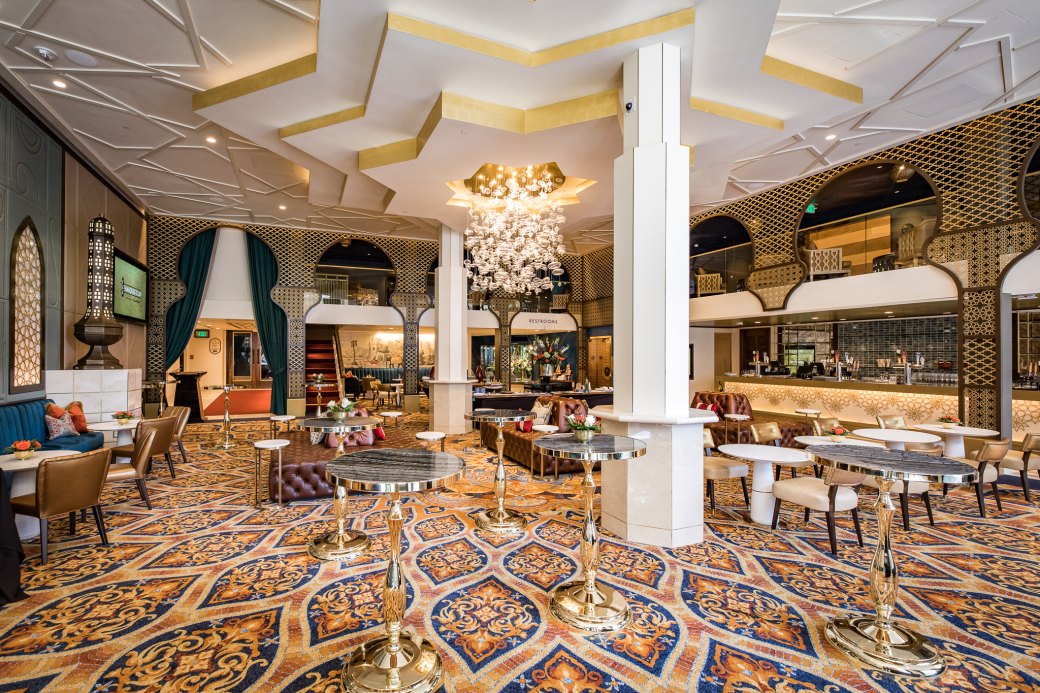 How do you improve on something that’s already perfect? A tough question, and certainly one on the minds of those architects and designers responsible for the recent renovations at Atlanta’s Fox Theatre. Purists, don’t be alarmed, nothing has been done to change the interior of the grand old theater on Peachtree Street, but previous retail space and the theater’s roof top have been repurposed to accommodate the newly-opened Marquee Club.
An exclusive amenity for those wanting something more with their evenings at the Fox, the Marquee Club is not necessarily geared toward the average rock ’n’ roller taking in an evening concert. It’s more for those season ticket holders who patronize the many Broadway and nationally touring theatrical productions that also take place at the Fox. Individual annual memberships start at $2,700 and include two passes per night for up to 35 performances — and take note, this membership fee is an additional cost on top of the ticket price for whatever event you choose to attend. None of this is to say rock concert goers are discouraged from becoming members, but one has to ask: Will there be 35 concerts presented in a given 12-month period that one person wants to see to help amortize the annual membership cost? If not, single-day club access will be made available to many shows on a first-come, first-served basis, should you get the urge to splurge for a special occasion, say, if the Rolling Stones decide to play the venue. Of course, with parking prices sky-high around town, you may want to become a member for the free parking space that the membership provides.

Thursday, May 19, was the last of three parties celebrating the club’s opening. Guests were feted with free drinks and Middle Eastern, Moorish, and Levant food offerings that reflect the Fox’s architectural origins. The design of the Marquee Club plays off those original inspirations, offering a Mid-century modern take and broadening the influence, borrowing from Turkish, Greek, and Indian ornamentation. While the original Fox Theatre design is somewhat subdued yet majestic with its browns, maroons, and greens, the newly-opened multi-level club is bright and shiny with predominately gold, white, and aqua shades accenting the Moorish and Islamic designs.

With three bars on the open-air, semi-open, and enclosed rooftop plus the long bar on the main floor, getting a drink before shows and during intermissions should be no problem. Nonetheless, a new system is being tested which would allow patrons to order drinks on an app, conveniently available for pick up during intermission.

After $10 million and five years of anticipation, the Marquee Club is a fine addition to the Fox Theatre legacy, if only for guests to sit on the rooftop and take in the view as the Fox sign illuminates the night.
The idea of offering “elevated” experiences at a performing arts venue is not a new one, but the need to play catch-up with the countless amenities offered at sports arenas adds a layer of challenge.

Recently, the City Winery opened its version of this phenomenon with the Suite. A private room adjacent to the main performance hall, the Suite offers an oversized window by which to view the concert, in addition to a live audio/video feed into the room via a 45-inch TV and professional-grade sound system. Available during select concerts, it seats up to 10 people who also have access to a VIP area in the venue itself. Pricing for the Suite varies according to the show and includes your own host, fresh hors d’oeuvres, an open bar (wine and beer), two reserved parking spaces, and a private entrance to bypass the waiting line.

Chosewood is not a neighborhood known as an entertainment destination. Other than Earthshaking Music, which moved there after leaving the East Atlanta Village, musicians and artists haven’t much reason to visit. With the development of the south leg of the Beltline finally starting to gain momentum — and the establishment of the Chosewood Arts Complex — that’s set to change. Located at 420 McDonough Boulevard in what was formerly the Antioch Baptist Church, the complex includes three buildings. The 300 building at the back of the lot holds office space. The 200 building, or the Gallery, is a smaller assembly hall, appropriate for events like business presentations, weddings, and art exhibitions. The 100 building is the Chosewood Ballroom. The dance and music-friendly event space features an ample-sized stage, a solid in-house audio system with live recording capabilities, and a newly-installed floated hardwood dance floor built by the same company responsible for the flooring at the Decatur School of Dance. The Chosewood complex, which lies adjacent to the old General Motors Lakewood plant, has access to five acres of parking.

A spokesperson for the Chosewood Arts Complex says the buildings are being developed with the goal of becoming a community-minded enterprise that serves the patrons and creators of Atlanta area dance, music, and art. Three of the partners in the LLC — Atlanta musicians and brothers Tommy Dean, David Dean, and Britt Dean, who is the original founder of the Point in Little 5 Points — have a long history in the Atlanta music scene, including A Band of Desperate Men,Thermos Greenwood, and the Colored People, to the League of Decency and Vietnam. History proves they know what they’re doing, giving the Chosewood Arts Complex the ability to become just the draw the neighborhood south of Grant Park needs.
With the chosewoodballroom.com website still under construction, more information on the Chosewood Arts Complex can be found at 420mcd.com.