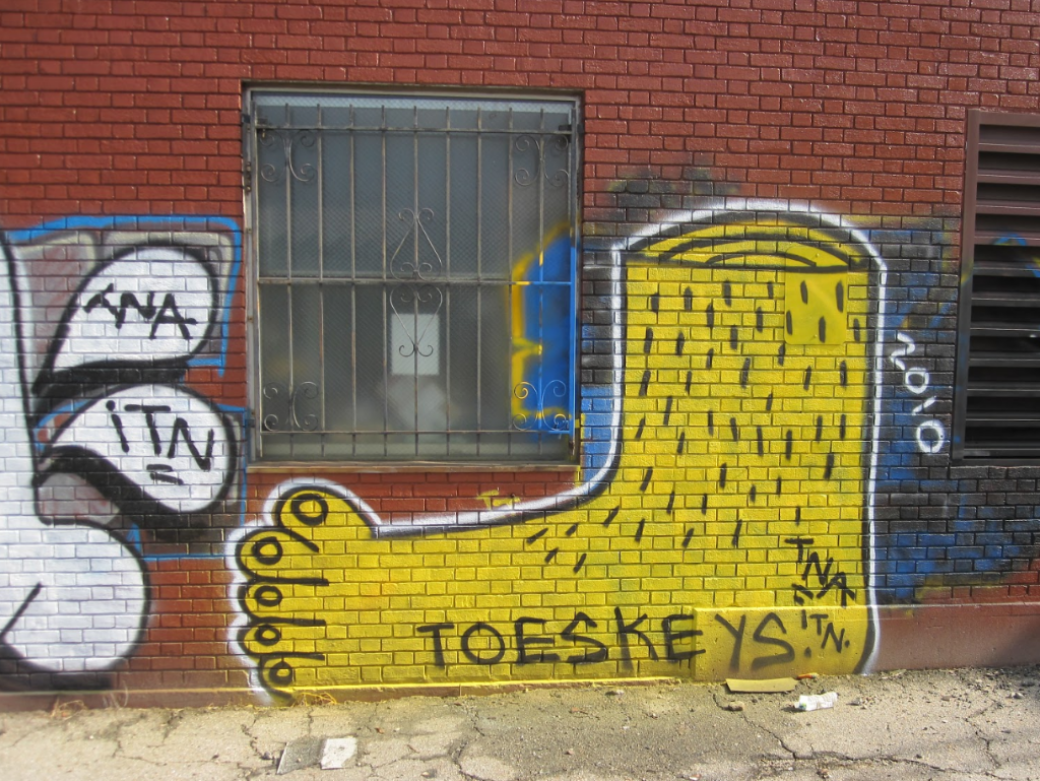 Even at the young age of three it was clear that Harrison Keys was an artist. His mother, Laura Keys, laughs about it now, as she relives a story of a time when she went into Harrison’s room one day to check on him to find that he had taken a pen and drawn an X on every flat surface in the room — on the walls, on doors, inside closets, and everywhere else he could possibly reach. “I said ‘Harrison, no!’ You can’t just go around writing on walls,” she says. “I remember, he looked up at me and said, ‘Yes I can ...’ Another time, I came home and found that he’d written his name on the front door,” she adds. “When I confronted him about it he pointed at his sister Sarah and said ‘she did it!’ But she was only two-years-old,” she adds. “From a very early age, Harrison was broadcasting his presence to the world, at every chance he could get.”

At the tail end of the ’90s and well into the aughts, Harrison Keys emerged from Atlanta’s indie hip-hop and street art scenes as a mischievous graffiti artist. At first, he went by the name TAIKO — bombing walls with his signature tag everywhere from Downtown Atlanta to the Emory Village. After a run-in with the law, however, he distanced himself from this moniker to embrace the name TOES. More than just a graffiti artist, TOES quickly became the telltale signature of a ubiquitous neo-expressionist who struck like a thief in the night. He left stickers on light poles, painted wooden cutouts of boots, sandals, and hairy feet screwed into stop sign posts, and, against his mother’s wishes, wrote his name on any surface he could reach.

When it came to street art, and the work he created as TOES, Keys was fascinated by impermanence and the idea that every mark he left on the city would one day be destroyed. “He knew that the best art was already gone,” says his sister, Sarah. “The best art is stamped in a time and a place in someone else’s memory, inspiring them to go out and create their own works of art in whatever way it struck them, and he was into it.”

On July 7, 2016, Keys died from a heroin overdose. He was 37 years old. Still, traces of his signature line work, wordplay, and vibrant colors can be found tucked away in the hidden recesses of the city that have not yet fallen prey to the wrecking ball of in-town gentrification. Two of his pieces were acquired by the High Museum of Art following a 2013 group show, titled “Drawing Inside the Perimeter.” TOES used words like colors, like notes that shape the sound, rhythms, and melodies of music, to create a singularly beautiful and abstract language that addressed the humor and the harshness of life in the modern world.

On Sunday, November 4, Keys’ mother and sister join Dashboard U.S. to present Over//Under, a one-night celebration of TOES’s life, artwork, and his influence, with an exhibition at Pratt-Pullman Yard. There will be roughly 100 TOES pieces on display alongside animated projections of his work, all set to the tune of “TOES,” a musical composition written by Atlanta Symphony Orchestra bass player Michael Kurth.

“TOES” is the first of a three-movement piece, titled “Everything Lasts Forever,” in which each movement is inspired by different pieces of graffiti and street art that Kurth encountered in and around the Old 4th Ward, the Krog Street Tunnel, and on the side streets surrounding Oakland Cemetery. It was a TOES mural that resonated with Kurth the most intensely. Even in death, it seems, Keys’ interest in the uncertainty of art in the urban landscape still resonates in profound ways, affecting people who encounter his work.

Shortly after his death, Laura Keys was at home, working in the kitchen, with WABE’s “City Lights” playing in the background. She was only half paying attention when an interview with Atlanta Symphony Orchestra double bass player Michael Kurth came through the speakers. He was a featured guest, interviewed by Lois Reitzes about his work with the ASO, and a piece of music he had composed that was inspired by some artwork he’d encountered on Memorial Drive. When Reitzes first uttered the name of the composition, “TOES,” Laura knew they were talking about her son.

She called the symphony, hoping to connect with Kurth, but felt like she’d reached a dead end. About half-an-hour after reaching out, though, Kurth called back. “I told him it was my son who’d made the mural they were talking about, and I cried and cried through most of it,” she says. “At one point he said, ‘I’m terribly sorry to have upset you,’ but I told him he hadn’t,” she adds. “With what he has done, he has given us a great gift to remember Harrison through his art and shown how his art has influenced others in these creative and unexpected ways.”

The piece on Memorial Drive that had captured Kurth’s imagination is a simple tag featuring two old-school Chuck Taylor sneakers and two naked and hairy feet. “TOES” takes shape as a percussion-heavy number that, through impressionism alone, picks up on Keys’ ever-present, often dark sense of humor. After all, Keys was a member of the TNA graffiti crew, whose initials have been said to stand for everything from “Top Notch Atlanta” and “Taiko’s Nerd Army” to “That’s Not Art.”

Keys also created and installed a bottomless MARTA comment box at the corner of North Highland and Ponce de Leon Avenues, which remained there for nearly 11 years. The comment box was there for so long that MARTA employees regularly cleaned and maintained it, assuming it was a leftover remnant from a past campaign encouraging rider feedback.

“At face value, I could see the humor and whimsy in the artwork, but it also had power,” Kurth says. “It felt like it was saying look at these feet! He’d taken such a simple thing — cartoon feet — and made them important. It’s like they are demanding to be taken seriously, but seriousness that contains a lot of whimsy.”

Kurth was born in Falls Church, Virginia. He lived in Maryland for a while before joining the Atlanta Symphony in 1994. He has called Atlanta home ever since. Kurth wrote each of the three movements contained within “Everything Lasts Forever” — “TOES,” “Bird Sing Love,” and “We Have All The Time In The World” — based on graffiti art that he’d encountered. But the entire composition is bookended by a bass-heavy, two-note motif, as though it were evoking the sounds of stomping feet, guided by a hidden hand.

“Everything Lasts Forever” premiered for a live audience at Symphony Hall on April 4, 2014.

Later, one night after the ASO performed the piece at the University of Georgia’s Hugh Hodgson Concert Hall in Athens, conductor Robert Spano invited Kurth onto the stage to take a bow. While Kurth was on stage, Spano asked, “Hey, what do you think about recording a whole CD of your stuff?”

The opportunity, for Kurth, was too great to pass up. “I felt like I had won the lottery,” Kurth says. “Yes, needless to say, I was cool with the idea. For someone of my stature to have a respected symphony orchestra, like the ASO, record an entire CD of my music is huge.”

The ASO and the Chamber Chorus recorded a handful of Kurth’s compositions with titles such as “A Thousand Words,” “May Cause Dizziness,” and “Miserere” alongside “Everything Lasts Forever.” A CD is due out in early 2019.

For the Nov. 4 Over//Under exhibition at Pratt-Pullman Yard, a recording of the composition will be played through a sound system.

The building itself is marked by at least two massive TOES pieces painted on its walls — maybe more. It’s also bound to be one of the final events of its nature to take places at Pratt-Pullman Yard, as the building is already being prepared for a massive, mixed-use redevelopment project.

TOES created provocative art, but he was never prone to provocative gestures. Like Kurth’s reaction to mural on Memorial Drive, the aim with his street art was to capture a moment, and create a sensory impression of a fleeting time and place. When he wasn’t painting his name on walls throughout the city, he worked at home, writing, painting, and drawing at a feverish pace — working out as much as he could possibly say, in his own way. “Going through these notebooks, there is just so much here,” Sarah says. “It is overwhelming. He was aware of what he was going through, and it comes through in a lot of his work. Maybe other people — people who are going through a similar situation that he was going through — could learn from this, and be inspired to improve their situation.”

A limited edition series of six of Harrison’s prints will be for sale at Pullman Yard Sunday night, and afterward via harrisonkeys.bigcartel.com. All proceeds for their sales benefit St. Jude’s Recovery Center, Inc. who provides care and recovery services from addiction and co-occurring mental health disorders.

The name of the show, Over//Under, refers to TOES use of words in his artwork. While organizing the stacks of paintings and notebooks that Harrison left behind, his sister Sarah was struck by the many lists he made. “He was a list maker, for sure,” she says. “On every single one of them he wrote, ‘finish Over//Under.’”

Harrison had juxtaposed countless combinations of words that were seemingly at odds with each other — overworked/underpaid, overcooked/underdressed, and so on. “He never could seem to finish it,” Sarah says. “He had a fascination with words, that came through in his art. I think it’s because he was so uncomfortable and communicating verbally. In a world where we’re constantly bombarded with words, this is how he communicated.”