PHOTOS: Doyle, Toxic Holocaust, and more at the Masquerade 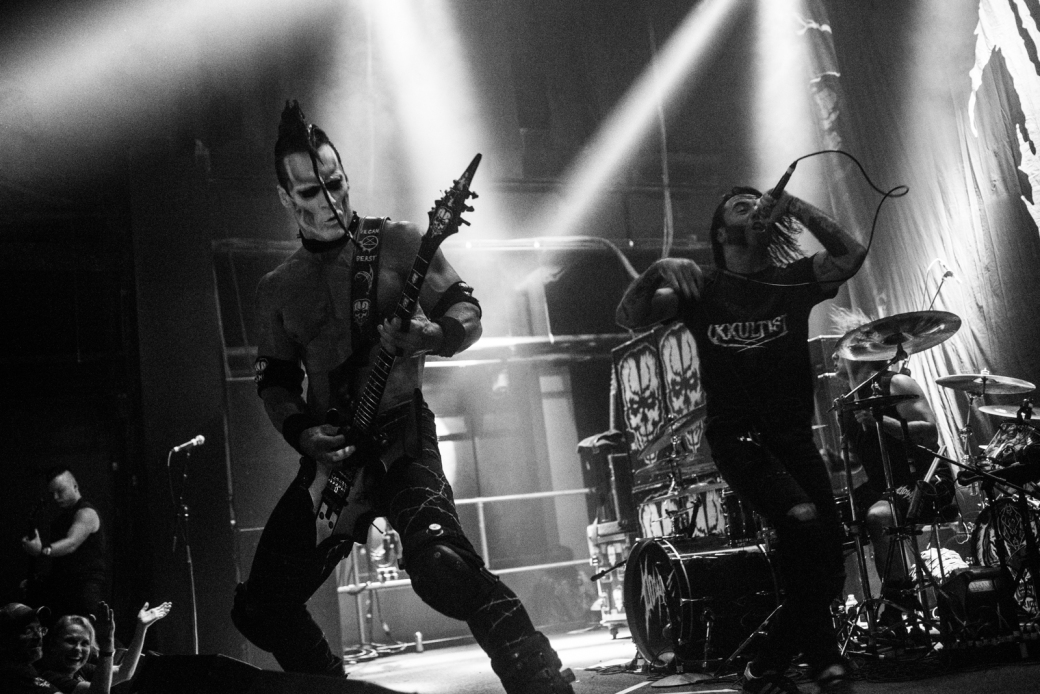 Since 2013, Doyle Wolfgang Von Frankenstein and Cancerslug frontman Alex “Wolfman” Story have crafted a wicked metal dirge that defies the specter of nostalgia. Doyle, born Paul Caiafa, played a fundamental role in shaping the Misfits’ fiendish image and primitive horror-punk classics in the early 1980s, and again in the late ’90s. Now, working alongside Story, the two breathe new life into a more sinister monster by channeling the demonic hardcore of the Misfits’ most aggressive album Earth A.D., into a body of muscular metal assaults. With two albums to his name — 2013’s Abominator and 2017’s II: As We Die — Doyle and Story are at full-tilt with a macabre new beginning.

On November 7, Doyle stormed the stage in Heaven at the Masquerade amid a bill featuring thrash metal masters Municipal Waste and Toxic Holocaust, along with Haunt, Die 985, Hembree & the Satan Sisters, and the Aggravated. The marathon lineup was a combination of two shows — Doyle’s show in Hell moved into Heaven when High on Fire canceled due to frontman Matt Pike recently undergoing an emergency partial toe amputation (see Facebook for photos, and they are not for the faint of heart).

Doyle and Story, backed by bass player Brandon “Izzy” Strate and drummer Wade Murff brought an ominous spirit to the stage. Songs such as “Run For Your Life,” “Beast Like Me,” and “Hope Hell Is Warm” took shape amid a whirlwind of murky distortion, high-speed rhythms, and hardcore-metal animus. As each number unfolded, Doyle beat his guitar strings with massive, pounding strokes, as though he were trying to smash his signature Oktober Annihilator guitar to pieces. His sculpted physique and trademark undead rock ’n’ roller face paint shined amid a backdrop of amplifiers blasting his new skull logo, bathed shadows and blue lights.

Frontman Story brought the performance to a fine point; the Wolfman is a showman, whose presence on stage evokes the dementia of the Jesus Lizard’s David Yow and the bold intensity of Glenn Danzig circa “Mother,” wrapped in glorious sweat-soaked Southern abandon. His manic energy is the perfect counterpoint to Doyle’s colossal presence. Between songs, he barked the same refrain with a thick Alabama drawl: “This next one is a love song. You can dance to it if you’d like.”

Wednesday night’s seismic performance opened a dialogue between Doyle and a somewhat different audience from most nights on the As We Die World Abomination Tour. Some faces in the crowd were there to bear witness as a horror-punk icon took a bold step in a new musical direction. Atlanta’s thrash metal scene also gathered to bang heads to Toxic Holocaust and Municipal Waste’s whiplash fury. Severe and specific devotion are the norm for both camps, but even in the punk-metal universe, the fervor generated in the pit was extraordinarily intense.

Photographer Mike White elbowed his way through the melee to capture a gallery of images from performances by Haunt, Toxic Holocaust, Doyle, and Municipal Waste.

Read a Fear of Fear Q&A with Doyle here.