As though it wasn’t enough for Steve Vai to wow audiences with his unrelenting virtuous guitar sensibities by himself, he’s gone and summoned some of the finest six-string shredders in the known world. Yngvie Malmsteen, Zakk Wylde, Nuno Bettencourt, and Tosin Abasi all join Vai onstage for the second run of the Generation Axe Tour, which hits the Tabernacle December 8. As interesting as it may be to hear each of these guitarists play solo, the real magic of the Generation Axe tour lies in the chemistry that arises when all five guitarists play together. Vai checked in, just before taking the stage in Denver, to discuss the tour, planning ahead, and guitar effects.

Tour’s going great, we kicked off about a week ago (out of breath, takes a pause). Sorry, just ran up a flight of stairs. After a while, you get in a groove and everybody knows what they need to deliver. You show up prepared and everything feels great.

What made you decide to do the Generation Axe Tour again?

Because it’s so much fun and it really works. I’ve been in this business for 40 years and you look for things to enjoy. That’s the name of the game. We did one tour of America and it went really well, then we did an Asia tour and it went great. It’s a nice thing we’ve got going and we really enjoy being out with each other. It’s a unique kind of a show in that we’re presenting rock guitar in a little bit of a different dynamic. The show is basically one backing band and it’s seamless, it doesn’t stop for like three and-a-half hours. You get this great kind of visual experience, we all come out- five guys, slamming away in harmony. It’s so nice to hear that because it’s rare. Harmonized guitar sounds so beautiful to me, I’ve always been a huge fan of Brian May. But it’s very rare you get to hear that in a live setting because it takes a lot of orchestration. The show starts with all five of us, and then Tosin Abisi comes out and offers a couple of his songs. His music is progressive, he’s just such a fierce player. Then he does a song with Nuno. It’s kind of a handing off of the baton, and then Nuno does his set. Everybody’s set has their flavor in it. Within the rock genre, you’ve got these wonderful different colors. We’re all like a different color but we work together like a nice artistic painting or something (laughs).

It seems like you are constantly challenging yourself musically and always putting yourself in new situations. What is your process like for planning these collaborations and how do you narrow down your ideas?

It’s like anybody who’s looking to have fun creatively. You’re always coming up with ideas in the moment, and your creative idea can manifest very quickly. But sometimes you get an idea that is vast, very broad, and you have to plan way ahead and chip away at it. I’ve got like five projects in the works right now for the next two-three years. But you have to also be open to change because anything could happen at anytime. If it feels right, you flow with it. Something like Generation Axe, when the idea hit me, was so compelling it got pushed up to the top of the list (laughs). But it took a year and-a-half to two years to manifest.

Last time we spoke, we talked about home recording. Could we delve into your signal path a bit today? And could you give us your thoughts on the true bypass vs traditional pedals debate? Does it matter?

It matters, based on the ear of the person who’s playing. If you take your signal and put it thru a stompbox, if it’s not a true bypass it will color the sound. Some people like that. I’m a purist, I like a true bypass, but it’s hard because not many pedals are made that way. And a lot of them often have a relay and you hear a pop when you switch them on.

If you were stuck on a desert island and could only have a rack unit or stompboxes, what would you choose?

(Fractal Audio Systems) Axe-Fx. It’s like a space station, it has everything.

Is that what you are using now, live?

I use it for the effects, but I don’t use it’s amp module.

I had a long relationship with Carvin, many decades. They don’t make the legacy head anymore, but they make a legacy stompbox and that’s what I use. It’s a pedal with tubes in it, it’s the preamp section of the Legacy. That’s really the thing that is my sound.

You know, I like the (Morley Steve Vai Signature) Bad Horsie in the studio under controlled conditions, but for consistency I like just a Dunlop 95Q, whatever they call them.

That’s what you use live?

Yeah, you’d have to check the name of the model. I don’t why they call them such obtuse numberings. They should name it “Bob” or something.

What are the essential FX for you?

The go-to devices for me are delay and distortion. I like stereo delay, so I like to have a stereo rig. If I have just stereo delay and distortion, I’m good. I like a lot of gain when I solo or play melodies and sometimes amps just don’t have it. And delay, I just love delay. It kind of encloses you, envelops you, it creates a huge sound. It’s forgiving. 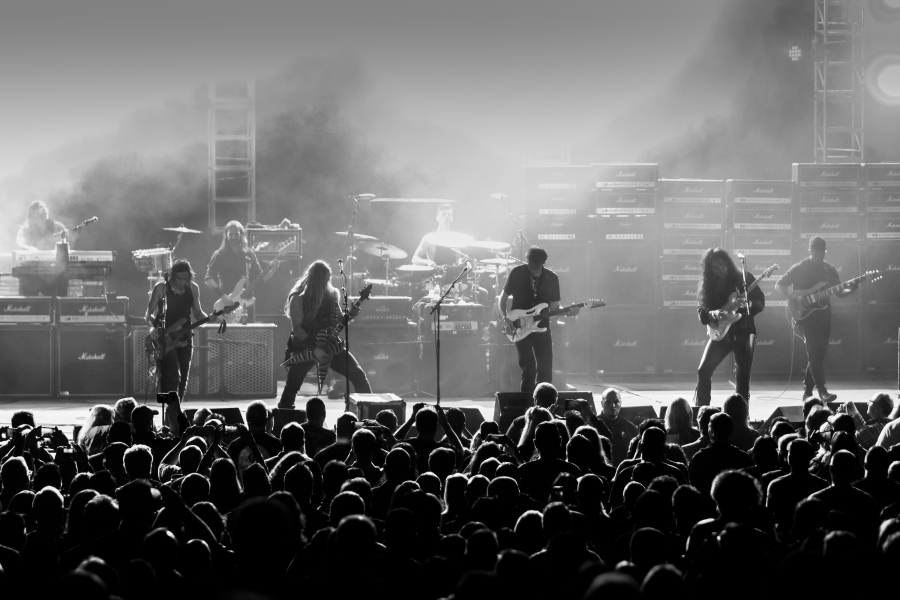 CLASH OF THE TITANS: Generation Axe brings the best shredders of the known universe together for a night of six-string savagery. Photo by Fournier Malloy


What does the pre-show warm up for this tour look like? I think many guitar fans could imagine the five of you in the dressing room shredding away unplugged. Are you guys backstage warming up and trading licks?

Well sometimes, it’s based on the venue. Some venues we have our own dressing rooms, some venues we’re all in one dressing room. Everybody obviously likes to warm up before the show, so if we happen to be in the same dressing room at the same time, it could turn into a little jam (laughs)