From Migos to Misanthropic Aggression, 40 of the city's most essential listens of the past year 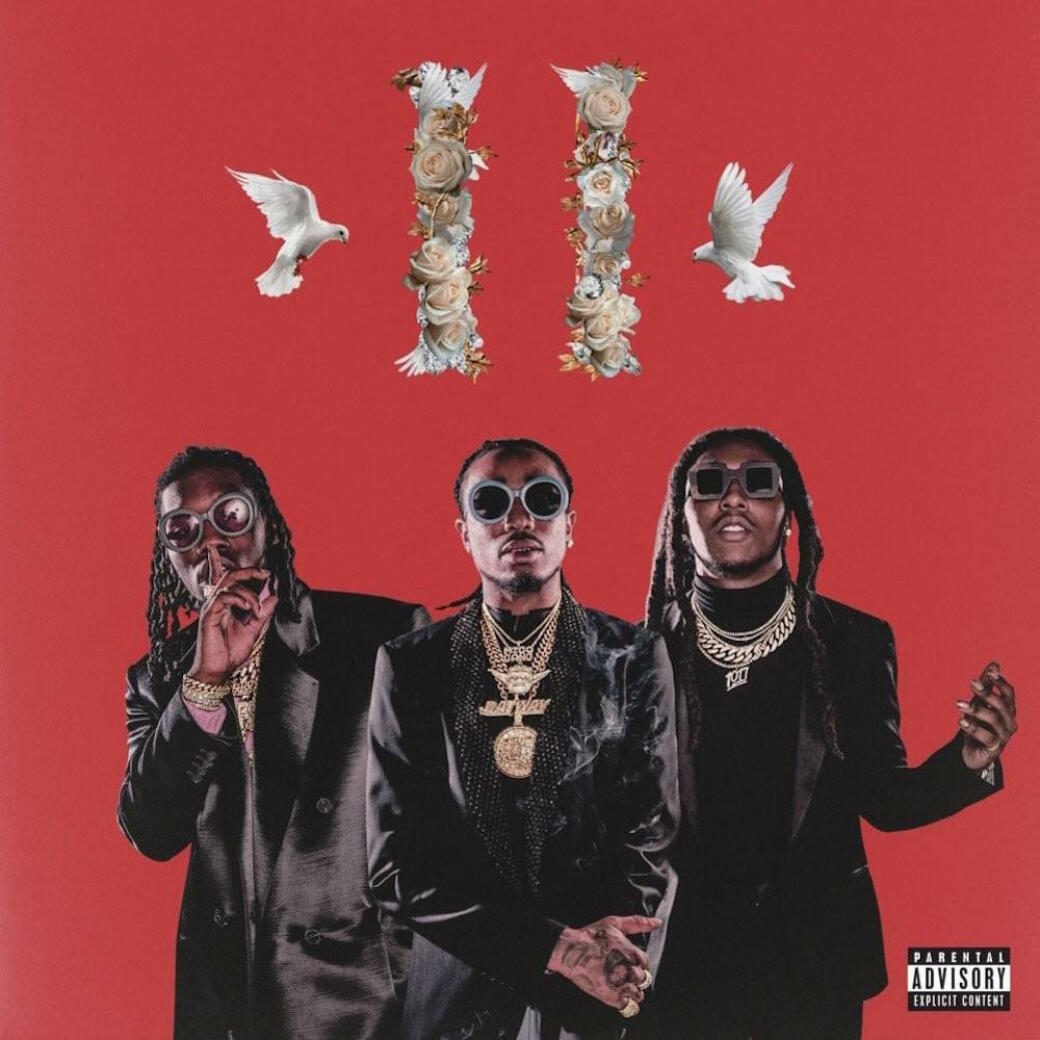 It really is staggering to tally up the amount of music that came out of Atlanta in 2018. From Janelle Monáe’s Dirty Computer to Misanthropic Aggression’s Inability to Cope, the richness, variety, and sheer volume the local music scene cranked out this year reflects an impressive step up on all fronts. Even with an exhaustive list of 40 titles, hard cuts had to be made. Since the year began, Migos’ Culture II proved to be a grower, not a shower, as the rising trap stars faced harsh criticism, but ultimately landed a spot co-headlining the January 31 pre-Super Bowl concert, with Lil John and Ludacris, at the State Farm Arena. On the other hand, 21 Savage’s I Am > I Was has been tearing up Billboard charts upon arrival. In the trenches of the metal scene, Gunpowder Gray and Dead Now unleashed monster riffs that surpassed everyone’s expectations, and electronic producers Charolastra (Peter Roglin), Fit Of Body (Ryan Parks), and Twins (Matt Weiner) reached deeper and higher into the ether to craft heady and psychedelic soundscapes like never before. Of course, all of these names are just the tip of the iceberg. There’s enough room to roam around in the music on this list for at least another year. Until that time, press play, let it ride, and get an earful of Atlanta's most essential music of the past year.


31. Tears For the Dying: Charon (Self-released)


29. Antarcticats: I Know You Are, But What Am I? (House Cat Records)
Read CL's album review.

10. Taylor Alxndr: Hologram (Self-released) Between balancing roles as a drag artist, underground queer icon, and all-around Atlanta socialite, Taylor Alxndr found time to push even more boundaries with Hologram. The Southern Fried Queer Pride co-founder’s six-song mini album takes identity politics to the dance-floor with songs such as “One Dot,” “Log Off!” and “Feel It All.” The album radiates with bright synth-pop flourishes built around lyrical themes of perception, the role that technology plays in (mis)communication, and the importance of rising above societal dissonance. For Alxndr, the medium is the message. Promoting respect, solidarity, and interconnectedness amid the city’s creative communities is the bottom line, and Hologram is one big step forward for Alxndr and for Atlanta. — Chad Radford

9. Playboi Carti: Die Lit (AWGE) In 2018, Playboi Carti took his signature brand of mumble rap and ran with it, creating the playful sing-rap style that defines his first proper album, Die Lit. Carti, born Jordan Carter, possesses a high-pitched, scatlike rap style that sets him apart from his counterparts such as Lil Uzi Vert, Travis Scott, Lil Yachty, et al. Carti’s technique is fully on parade in songs such as “Right Now,” “Poke It Out,” and “Choppa Won’t Miss” featuring Yung Thug, creating infectious hooks and one-liners like, “I'm on ’em beans for the real, I'm on the lean for real” in “Lean 4 Real” (featuring Skepta). Carti’s style is something to embrace. His energy and songs capture a snapshot of a young Atlantan in his prime. — Jalen Jenkins

8. Gringo Star: Back to the City (Nevado Music) Five albums into a decade-long run, Gringo Star’s founders, brothers Nicholas and Peter Furgiuele, are sharp, proven songwriters latching onto a hook-heavy, somewhat surfy American sound. With Back to the City, the group maintains a sunny Anglophile undercurrent with cryptic lyrics that reflect their indie-rock sensibilities. As with any serious band, growing older and more confident means tweaking the approach. The album was self-produced, and pushes boundaries by adding orchestration to a handful of tracks. “Easy” brings sweeping, cinematic violins to garage pop, marking a step up. While not quite hitting Phil Spector-level overindulgence, the strings add a dreamy boldness that raises the bar higher than Gringo Star’s previous efforts. The wistful mid-tempo psychedelic rocker “La La La” gets the orchestral treatment, bringing a fullness and maturity to glam fare and evoking the Beatles’ Magical Mystery Tour. The surging ballad “Midnight till Dawn” is ready-made for the next Quentin Tarantino flick. Elsewhere, “Watchdog,” with its nasal vocal, reflects an edgy Only Ones-styled vibe. The album’s first single, “Mister Mystery,” cranks out power-pop crunch guitars and “ooohh” vocals with the effortless punch of late ’70s college radio. Live, these songs may lose some of the mystery gained in the studio. But Back to the City is a strong, decisive, and inspired step forward for Gringo Star, and shows the Furgiuele brothers are just beginning to tap their creativity. — Hal Horowitz


7. Breathers: Designed To Break (Irrelevant Music) Breathers’ first proper full-length is a sophisticated, Orwellian electronic pop odyssey. Upon first listen, songs such as “Low in the Sky,” “Centralia Road,” and “Only Operator” evoke the commercial new-wave pop motif of the ’80s à la Blancmange, Heaven 17, and late-era Human League. But as each song unfolds, the songwriting reveals a complexity in sound, production, and the anthemic vibe that drives the group’s vision of modern society. Vocalists and synth players Lee Gunselman and Jake Thomson, along with percussionist Mike Netland build each song largely around synthesizers. For “Low in the Sky,” cellist Andrew Cleveland and background vocalist Catherine Quesenberry (formerly of Shampoo and Qurious), add subtly organic layers to this brand of dystopian pop, without coming across as heavy-handed. Designed to Break is a musical manifesto as much as it is an easy listening experience. — CR

6. The Royal Krunk Jazz Orkestra: Get It How You Live (Groid Music/Ropeadope) What does 21st-century big-band jazz sound like? The answer: Get It How You Live, which showcases the Royal Krunk Jazz Orkestra, a 19-piece ensemble led by trumpeter Russell Gunn. With a couple of exceptions, the compositions are Russell’s, complemented by arrangements from trombonist and Kennesaw State University jazz band director Wes Funderburk. Dionne Farris lends her soulful voice to a hair-raising rendition of her song “Fair,” along with a new Funderburk arrangement of her song “Hopeless,” the title song from 1997’s Love Jones. Dashill Smith delivers a lyrical punch to “The Critic’s Song,” which features a funky rhythmic core that careens into a free-blowing horn excursion led by alto saxophonist Brian Hogans. With a degree of precision and élan usually associated with more seasoned big bands, the RKJO maneuvers through a contemporary cornucopia of styles including traditional jazz, neo-bop, neo soul, and hip-hop. — Doug DeLoach

5. Lunar Vacation: Artificial Flavors (Human Sounds Records) The charming innocence of youth lies at the heart of Lunar Vacation’s Natural Flavors EP, suspended in the pastel hues of nostalgia, experienced in real time. The lush tension and rhythmic interplay summoned by singer and guitarist Grace Repasky and guitarist Maggie Geeslin give rise to rich and yearning vignettes in songs such as “Daytime,” “The Basement,” and “Too Late, Colin.” Each number explores the depths of life’s many wonders taking shape, new relationships coming to fruition, and old relationships fading away the summer after high school graduation. Vaguely conceptual in nature, and somewhat cinematic, Lunar Vacation’s sophomore EP is a stunning document proving just how much more colorful dream pop can be. — CR

4. 6lack East Atlanta Love Letter (LVRN) What sets 6lack head and shoulders above his Atlanta-based trap-minded peers is a an honest-to-goodness knack for storytelling, songwriting, and breaking the mold. Press play on East Atlanta Love Letter, and the spacious productions and lyrics reflecting on good times turned sour in songs such as “Switch,” “Pretty Little Fears,” and the album’s title track ooze with sobering reality. A bunch of flashy cameo features by Drake, J. Cole, Future, and the likes will catch the attention of the mainstream, but 6lack has carved out a lane for himself based solely on his own musical prowess. — CR

3. Flamingo Shadow: Earth Music (Irrelevant Music) Flamingo Shadow’s debut full-length, Earth Music, arrived as a perfect painkiller for 2018. With so much doom and gloom dominating the news cycle, and social media transforming the population into a nation of zombies, Earth Music’s literal and metaphorical themes of perpetual motion — hitting the open road — are a rich counterpoint to modern malaise. Singer Madeline Adams’ voice resonates with breezy natural tones of confidence and elation. Songs such as “All Way Down,” “Taxi,” and “Riding on the Wind” channel the spirit of existential freedom into a psychedelic swirl of tropical post-punk, dance-floor pop, and ethereal textures. — CR

2. Lonnie Holley: MITH (Jagjaguwar) In September, against a backdrop of nationwide social and political discord, Lonnie Holley dropped MITH. With sublime poetry and ethereal vision, the 68-year-old outlier artist’s third album (his first for Jagjaguwar) renders the hard-edged realities of modern American life into 10 beautifully jarring numbers with titles such as “I’m a Suspect,” “I Snuck Off the Slave Ship,” and “Sometimes I Wanna Dance.” Wrapped in an exquisite ambient framework created by Dave Nelson (trombone and loops), Marlon Patton (drums, percussion, Moog synth bass pedals), and guests Shahzad Ismaily, Laraaji, Sam Gendel, Richard Swift, Elizabeth Laprelle, and Anna Roberts-Gevalt, Holley leads listeners on a mostly improvised, hypnotically engaging path through impressionistic realms, touching everything from racial strife and “overdatafying” to blood kinship and spiritual salvation. Still, it’s the album’s first single and video, “I Woke Up in a Fucked-Up America,” that brings MITH to a fine point, and serves as a harrowing new national anthem. — DD

1. The Rock*A*Teens: Sixth House (Merge) After 18 years between albums, the Rock*A*Teens, longstanding purveyors of the Cabbagetown sound, return with a career-defining masterpiece. Sixth House embraces glowing production that transcends the spectral guitar noise that usually shrouds Chris Lopez's tales of woe and deceit in the haunted South. Lopez's songs are populated by desperate characters living amid a bucolic landscape, but complications simmer just beneath the surface. Songs such as “Turn and Smile,” “Go Tell Everybody,” and “Closest to Heaven” turn shattering pain into catharsis layered in reflection and emotional depth — the culmination of a lifetime spent navigating Atlanta’s mean streets. www.mergerecords.com/the-rockateens. — CR