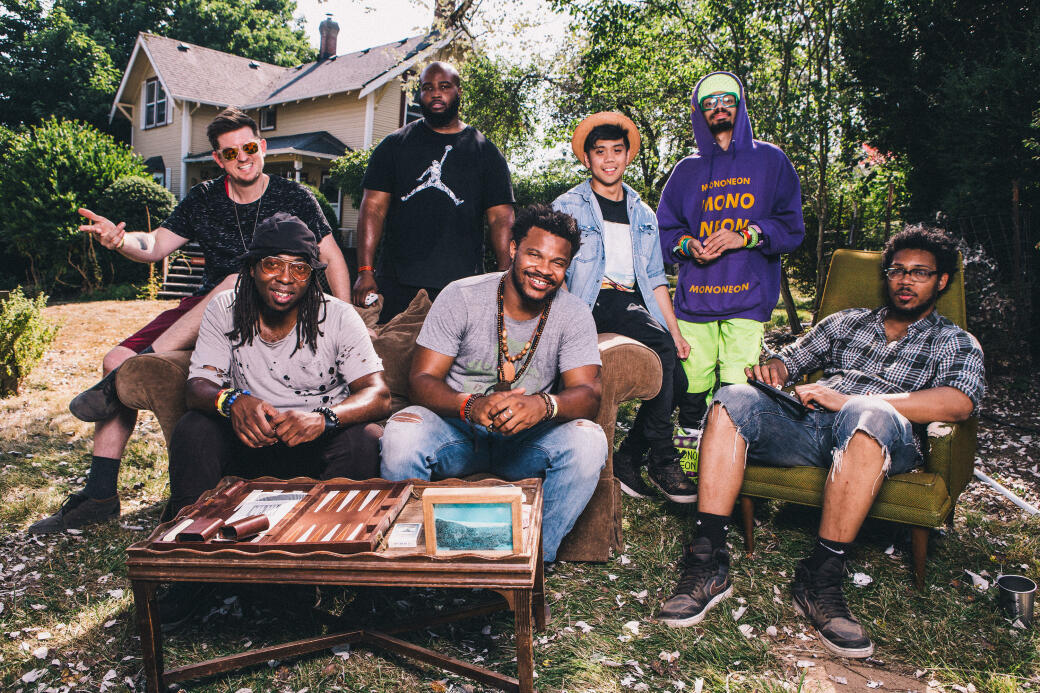 Ghost-Note truly is a band of the people. In October of 2015, Snarky Puppy percussionist Nate Werth and drummer Robert “Sput” Searight spent much of their time on the road, tearing up stages and taking the lead with monster drum solos night after night. “After the shows, fans would approach us in awe and ask us how long it took us to rehearse what they’d just seen on stage,” Werth says.

Their spontaneous outbursts amid Snarky Puppy’s sets were becoming a hit with audiences, so much so that their back-and-forth took on a life of its own. Werth and Searight hatched an idea to channel their shared chemistry — and what Werth calls a “connection through rhythm” — into a new alliance. Ghost-Note was born and has remained an ever-changing outfit, locked in a perpetual exchange of energy with its live audiences.

As the new group began developing its own personality, the duo set about enlisting a top-notch band, featuring what Werth describes as “some of the funkiest humans that we know.” After a series of personnel changes, the lineup settled into place, fronted by former Prince sideman Dywane “MonoNeon” Thomas on bass and guitar. A.J. Brown, whose resume includes working with Snoop Dogg and Fred Hammond, joined as bass player. Los Angeles-based keyboardist Dominique Xavier Taplin, who’d worked with Prince and Toto, came into the fold as well. “We started playing night after night, trying to take the music further and further, challenging ourselves musically while having a party at the same time,” Werth says.

Ghost-Note’s self-released debut album, Fortified, arrived in 2015. It’s a concept record — a drum record with no drum solos — that was built through overdubbing. The band’s second release, Swagism, arrived in April of 2018 via Ropeadope, and benefits from a far more organic approach. “We created Swagism with the entire band live tracking together,” Searight says. “It’s a whole new world of sound and approach, and it’s the way we want to make records in the future.”

This move toward a more naturalistic approach is a return to Ghost-Note’s impromptu musical eruptions during Snarky Puppy’s live sets. The lineup also features a garrison of world-class horn players, such as Mike Jelani Brooks, Jonathan Mones, and Sylvester Onyejiaka. This eight-member core is further reinforced by a crew of rotating musicians who are on loan from Justin Timberlake, Erykah Badu, Beyoncé, and Jay-Z’s backing bands. Both onstage and in the studio, all members contribute to Ghost-Note’s next-level grooves, horn clusters, and fuguelike moments of cosmic spoken-word poetry. The end product can be filed under jazz, but as Werth says, “We don’t think about writing music within a specific genre.”

As such, the music and lyrical bouts can feel a bit long-winded on disc. Live, however, the explosive energy is unmatched. “We are all jazz musicians at our core,” Searight says. “We always want to explore our music when we perform it live. Every night is another chance to connect with each other on a deeper level.”

The various members’ respective experiences in other groups serve them well as they convene to push their levels and abilities in Ghost-Note; the group dives headlong into a musical exploration guided by nothing more than collective intuition. “You find yourself in the background of that situation,” Searight says. “You always have to keep your solo shorter or keep a bird’s eye view of the artist you’re supporting.”

It’s about communicating with each other as it about connecting with an audience, and pushing the music deeper and higher into extraordinary new realms.