SCENES & MOTIONS: A working class hero is something to be

‘Skeleton Crew’ and ‘The Pitmen Painters’ 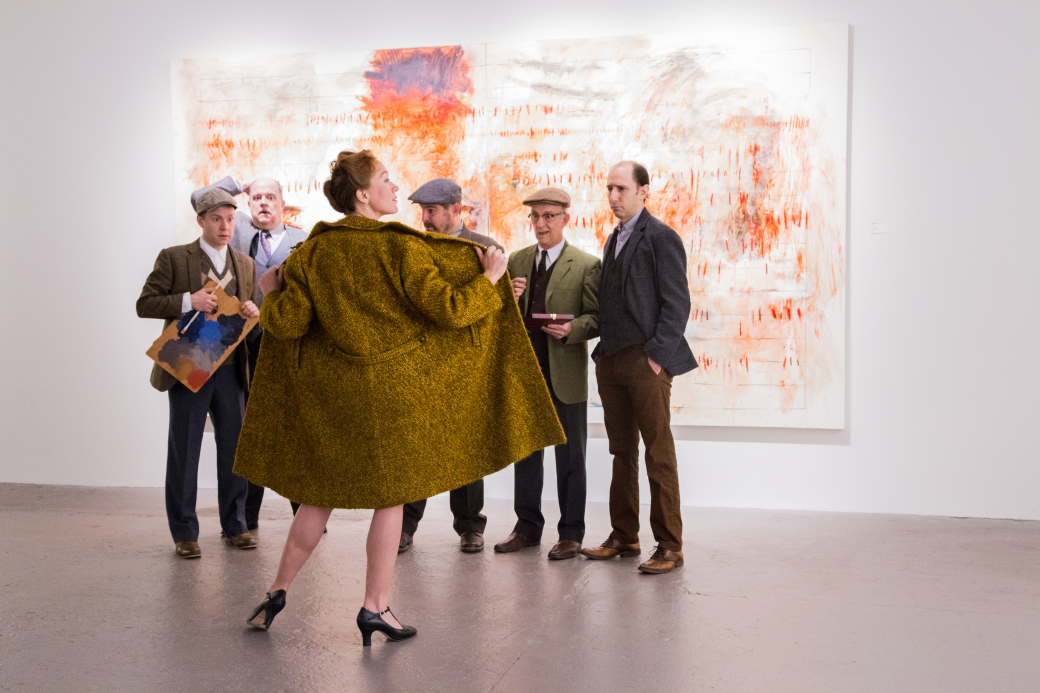 Self-validation through occupation or creative pursuit. The workplace as social microcosm. Work teams serving as substitute families. The collective versus the individual. Upper class/corporate management versus the working class. The potential of art and beauty to connect social and economic classes.

These are some of the universal and quite timely themes of two blue-collar dramas on local stages this month. Detroit playwright Dominique Morisseau’s Skeleton Crew centers on four autoworkers wrestling with conscience, identity, and the instinct for economic survival. The Pitmen Painters, by British playwright Lee Hall, tells the true story of a group of English coal miners during the Great Depression who began creating their own artworks and become unexpected stars of London’s high society art circles. In each story, the workers we spend time with are multifaceted, complex, and conflicted, reflecting and illuminating the difficult choices facing them during critical turning points in their individual lives and in their communities.

Kenny Leon’s True Colors Theatre Company is presenting Skeleton Crew, the final play in Morisseau’s three-play cycle The Detroit Project, each of which is set in her hometown. Webster’s defines skeleton crew as “the minimum number of personnel needed to operate and maintain an item, such as a ship or business, during an emergency or shutdown.” It is a fitting title for this four-character drama set in the run-down break room of Detroit’s last remaining car stamping factory during the auto industry crisis of 2008, the worst year of the Great Recession.

Faye, the factory’s union rep and a 29-year veteran on the job, is homeless, living out of her car, and a year away from collecting a big share of her hard-earned retirement benefits. Reggie, the working-class-turned-white-collar factory foreman, is working to provide the best life for his family while looking out for the workers who’ve come to trust him. Shanita is a pregnant young woman who’s proud of her job and loves her work. Dez is a brash, romantic young employee trying to save enough money to open his own business.

Each member of this African-American workplace family must confront choices on how to move forward if their plant closes. Reggie (Enoch Armando King) wants to prepare his team for the plant’s closing, but upper management requires his silence about how soon the factory will shut down until a fair employee severance package can be approved. Faye (Tonia Jackson) must decide how and where she'll live. Shanita (Asia Howard) must determine how to support herself and her unborn child. Dez (Anthony Campbell) must figure out how to make his dream a reality. Each character must balance their own needs and desires, their loyalty to one another, and their yearning to continue in a job they take genuine pride in.

True Colors associate artistic director Jamil Jude, who directed this production of Skeleton Crew, spent time in Detroit talking to auto factory workers. “For generations of Americans, landing a union job in a factory was like hitting the lottery. It paid a wage you could rely on to own a home and raise a family. The benefits were good. You could retire comfortably. Until very recently, factory jobs were one of the most reliable foundations of the American Dream.”

These sort of jobs, and this sort of work — building something as tangible and essential as a family car — are central to how the men and women in Skeleton Crew define themselves and their self-worth. The characters’ intimate and complex relationship to their occupation, their workplace, and to their fellow workers helps explain the depth of their anxiety about being laid off and leaving what they’ve known all their lives.

Director Jude and his cast were in rehearsals during the longest government shutdown in U.S. history. “We all knew friends or family who were directly affected by the shutdown,” says Jude. “Atlanta hasn’t been considered a key industrial center for a long time, but the recession impacted every town and city in this country, including ours. Tens of thousands of our neighbors across the metro area work in government jobs, so when they stopped getting paid this past January, we all sensed the anger and fear and even the personal self-doubt they were feeling. Ultimately, this is a play that speaks to any worker in any job in today’s America, blue-collar or not.”

Jude believes Morisseau’s plays “juxtapose beauty with destruction, hope with despair, and bring to light the complicated realities of urban African-American communities. Her artistic voice combines the beautiful poetry of the great writers of the diaspora with a laser-focused social critique of the modern age.” Jude adds, “It’s not surprising at all that the dramatic tensions in this play are resonating with our audience and with audiences across the country wherever Skeleton Crew has been produced.”

Audiences can explore another critique of class division from a blue-collar perspective in The Pitmen Painters. The Theatrical Outfit is presenting the Atlanta premiere of British writer Lee Hall’s often comical portrait of artistic flowering amid the oppressive conditions faced by a group of British coal miners. After hiring a college professor to teach them art appreciation, the miners, also known as “pitmen,” start painting scenes drawn from their everyday lives. Within months, avant-garde artists become their friends, their work hangs in prestigious collections, and they are celebrated in high society. But every day, they continue to risk their lives deep down in the mine.

Hall, who also wrote the screenplay for Billy Elliot was inspired by William Feaver’s book about the art collective known as the Ashington Group. In the 1930s, hundreds of mines were operating in this northeastern region of England, sending more than a million men underground to work 10-hour shifts in the pits. In this gritty environment, it seems a miracle that an insular mining community like Ashington could produce a talent like miner-turned-artist Oliver Kilbourn, let alone a whole labor collective of miner-artists.

According to Hall, ”These pitmen had a tradition of organized labor which provided places of solidarity which made possible this kind of intellectualism. They were profoundly concerned with creativity and how that linked to personal growth and collective understanding — how you learn, and the relationships, with teachers, with peers, in that process.”

The art discussions between the technically naive painters and their tutor, Mr. Lyons, manage to be both intellectually engaging and often quite humorous. “Art isn’t about answers,” the art instructor says during his first class with the pitmen. “It’s about asking questions.” The characters in The Pitmen Painters grapple and argue with a wide spectrum of questions. What is art and who should make it? When does a man who paints become a painter? What does art make of its maker? What are the merits of abstract versus representational art? Who owns art? How much should art cost?

Examples of their boldly executed paintings, which are projected on large screens during the play, depict scenes from their lives and the lives of their families and friends. These powerful artworks validate the tutor’s belief that culture is not the exclusive preserve of the upper classes, and that “fundamentally, underneath, anybody can have a creative gift.”

But perhaps the largest question at the heart of this story revolves around issues of self-identity and self-improvement, especially when they come in conflict with loyalty to one’s cultural group or community. As one of the paintbrush-wielding miners says, after hearing a speech celebrating his achievements and those of his fellow working-class artists, “It’s easy for people outside to see us as a bunch of miners. But we don’t see ourselves as that. We see ourselves as individuals, don’t we?”

In their plays, Morrisseau and Hall use humor, insightful detail, and vivid, lived-in dialogue to enable us, their audience, to connect intimately with the working men and women on stage. At such a divisive time in this country, there can be profound value in any experience that inspires us to look past cultural or class differences to see people as individuals and not as monolithic groups or stereotypes. And that certainly includes absorbing a compassionate, thoughtful play or gasping in awe at a deeply felt work of art, especially when we share that kind of experience with neighbors we haven’t yet met.