TALK OF THE TOWN: Badass trailblazers 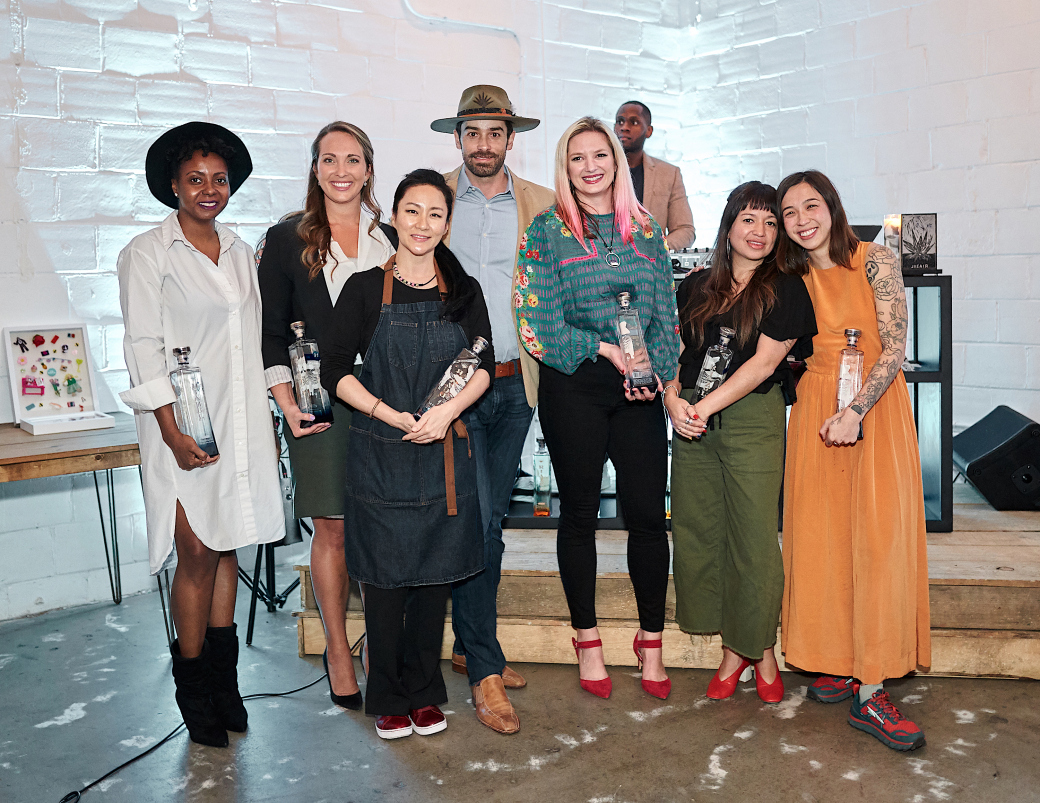 Two hundred years ago, when Maria Higinia Gomez served as a high counselor to the Mexican rebels fighting for their independence from Spain, she had no idea her defiant spirit would inspire distilled spirits almost two centuries later. Yet her great grandson, Iñaki Orozco, the founder of Riazul Tequila, proudly recalls her story when he urges others to imbibe his tequila.


“She fought for her life, for her country, for her community,” he tells a packed house at Upstairs Atlanta for a “La Chingona” party introducing the tequila brand to Atlanta.

“She paved the way so that tonight you can drink Riazul Tequila,” Orozco explains. “Almost 200 years ago, in the Mexican highlands of Jalisco, she fought with the rebels. Because of her valiant effort, and her courage, she was awarded 10,000 acres of land which she divided up with the insurgents after the war. Bless her, she kept 250 acres. Today, it’s now the home of the agave we use to make this tequila.”

When Orozco first saw the acreage, which had remained virtually untouched since first coming into his great grandmother’s possession, he believed it might be the perfect place to cultivate the blue agave plant. Years later, the fruits of his labor — Riazul Tequila Plata, Riazul Tequila Reposado, and Riazul Tequila Añejo — have proved his instincts were correct.

“This land is extremely high up,” he explains, “which fosters the complexity and offers a lot of minerals in the soil bed,” all of which, along “with the high content of fructose from the elevation,” enables Riazul to create “such a unique tequila.”

“La chingona” loosely translates to badass. In Atlanta, Orozco and his business partner, Adora Galas, chose to celebrate local Atlanta women who, in their opinion, are “trendsetters, showing resolve in the face of adversity,” and able “to break through barriers facing women and shape their city’s cultural landscape.”

You probably remember the first time you drank tequila. You licked some salt off your fist. Knocked back a shot of the pale, clear liquid. Grimaced. And quickly bit into a slice of lime. Such were the measures to which you would go to mask the bitterness of cheap tequila in exchange for the intoxicating effects of the agave plant. For years, cheap tequila was all you could find at your local package store. Even the top-shelf brands of only a few decades ago weren’t that good.

Like the role of women in society, things have changed.

Tequila is on the upswing, riding high in taste tests once reserved for the finer scotch, bourbon, and dark whiskies. Celebrities as diverse as George Clooney, The Rock, E-40, Justin Timberlake, and Carlos Santana have invested in Mexican distilleries or started their own. Now more of a sipping drink rather than a quick high — indeed, it’s only in the United States where the salt and lime ritual is adhered to — today’s tequila is smooth and refined. Taste is controlled as much by altitude as it is by the fermentation process, the type of cask in which it is stored, the length of maturation, and many other variables along the way.

Today, that is exactly what connoisseurs take into account when considering which brand of tequila to buy. Price might be a factor — conventional wisdom dictates the more expensive, the better, right? — but it comes down to taste. And the taste garnered from the agave plants cultivated on the land bestowed to Orozco’s great-grandmother, is why he chooses to recognize her legacy — indeed, her spirit — in promoting Riazul Tequila by celebrating local chingonas.

In Atlanta, they include:

Shannon S. Evans: The co-host for the event, Evans, who was responsible for the cocktails served at Upstairs Atlanta, opened the hip restaurant and bar Studio No. 7, which burned down opening night  2012. Undeterred, Evans rebuilt the nightspot, which she ran until closing it in June 2018. Evans now operates Holy Sip, a cocktail experience and beverage consulting company where she plans intimate international dinner parties and works with the Atlanta Food and Wine Festival, the A3C Hip Hop Festival, the Hartsfield-Jackson Atlanta International Airport, and The Soho House.


Monica Campana: The co-founder of “Living Walls, The City Speaks,” a nonprofit organization which seeks to promote, educate, and change perspectives towards public spaces through street art, Campana aims to bring together artists working in the public space (street artists, graffiti writers, etc.) with those who develop public spaces (urban planners, urban farmers, professors). Her efforts have proven highly successful, with the nonprofit operating at the intersection between economic development, art, and human service.

Lisa R. Hurd: The vice president of Capital Markets at RADCO, a real estate investment company, Hurd began her career in 2012 as an asset manager. Today, she oversees debt and equity capital markets and management strategies. In addition to her role at RADCO, she is the co-founder and current co-president of RENEW — Real Estate Network Empowering Women — whose mission is to inspire, empower, and advance women in commercial real estate finance. To date, RENEW has raised more than $200,000 to fund educational programing, networking opportunities, and scholarships for women pursuing undergraduate and graduate degrees relating to commercial real estate finance.

Karen Anderson: After spending a year living, working, and volunteering in Atlanta, Anderson decided she wanted to create a public art project — and Tiny Doors ATL, a series of small doors used as art installations around the city, was born. Bringing together some friends and her colleague (and mental health counselor and master crafter), Sarah Meng, they installed the first door together. Today, Karen does public speaking, corporate and private sculpture installations, and was the volunteer applied arts director for Girls Rock Camp ATL.

Dianna Settles: A Vietnamese-American artist and musician, Settles’ artwork has its roots in a 2014 trip to Vietnam, where, exploring her family’s heritage, she discovered artwork in which, for the first time, she could see herself. Drawn to a blend of traditional Vietnamese painting with classical influences of European colonization that mirrored her own mixed-race identity, Settles found that the “in-between-ness” of this work resonated, inspiring her to evoke a similar feeling in her own work as a way to reach others who also feel unseen. A believer in the presence of non-white bodies in works of art as a radical and historically important act, Settles hopes that through sharing her paintings and prints others will be able to follow her journey and, in doing so, feel encouraged to follow themselves.

Chef Jiyeon Lee: Known affectionately by fellow chefs as Jiji, Lee is a rock star in the kitchen, as anyone who has dined at her Heirloom Market BBQ — or feasted on the Heirloom Market tacos with spicy Korean pork and kimchee served at the Upstairs Atlanta party — can attest. A music superstar in her home country of South Korea, Lee traded the microphone for a carving knife to focus on her culinary talents. Fortunately, South Korea’s loss is Atlanta’s gain. 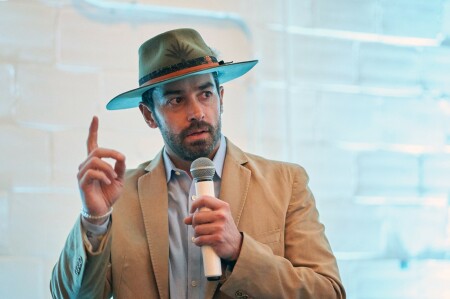 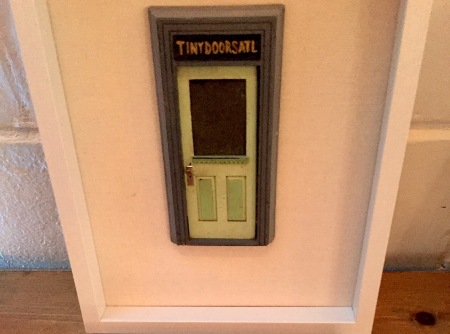 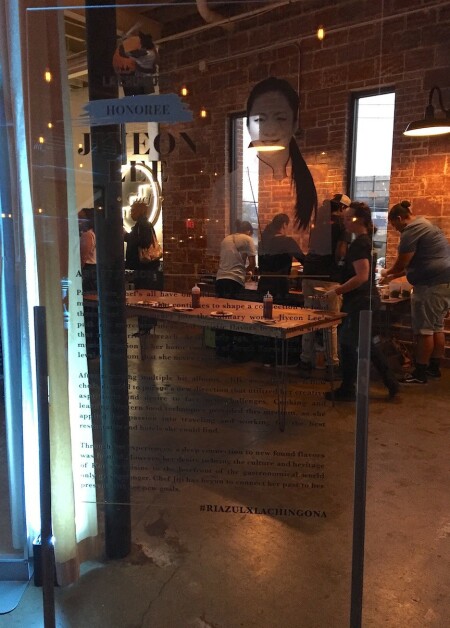 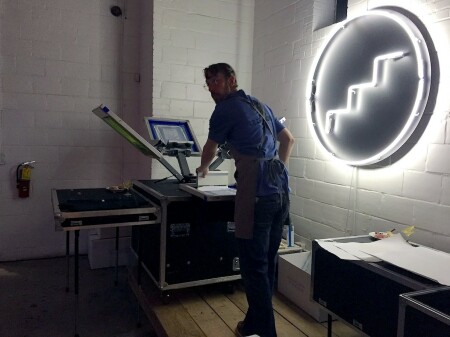 THERE'S A FIRST FOR EVERYTHING: Danger Press set up at Upstairs Atlanta, offering made-to-order Riazul Tequila t-shirts to go. Pick your size t-shirt and color — and you have a souvenir to go. Photo: CL Staff.