How immersive performances in the ATL are redefining the theatre experience 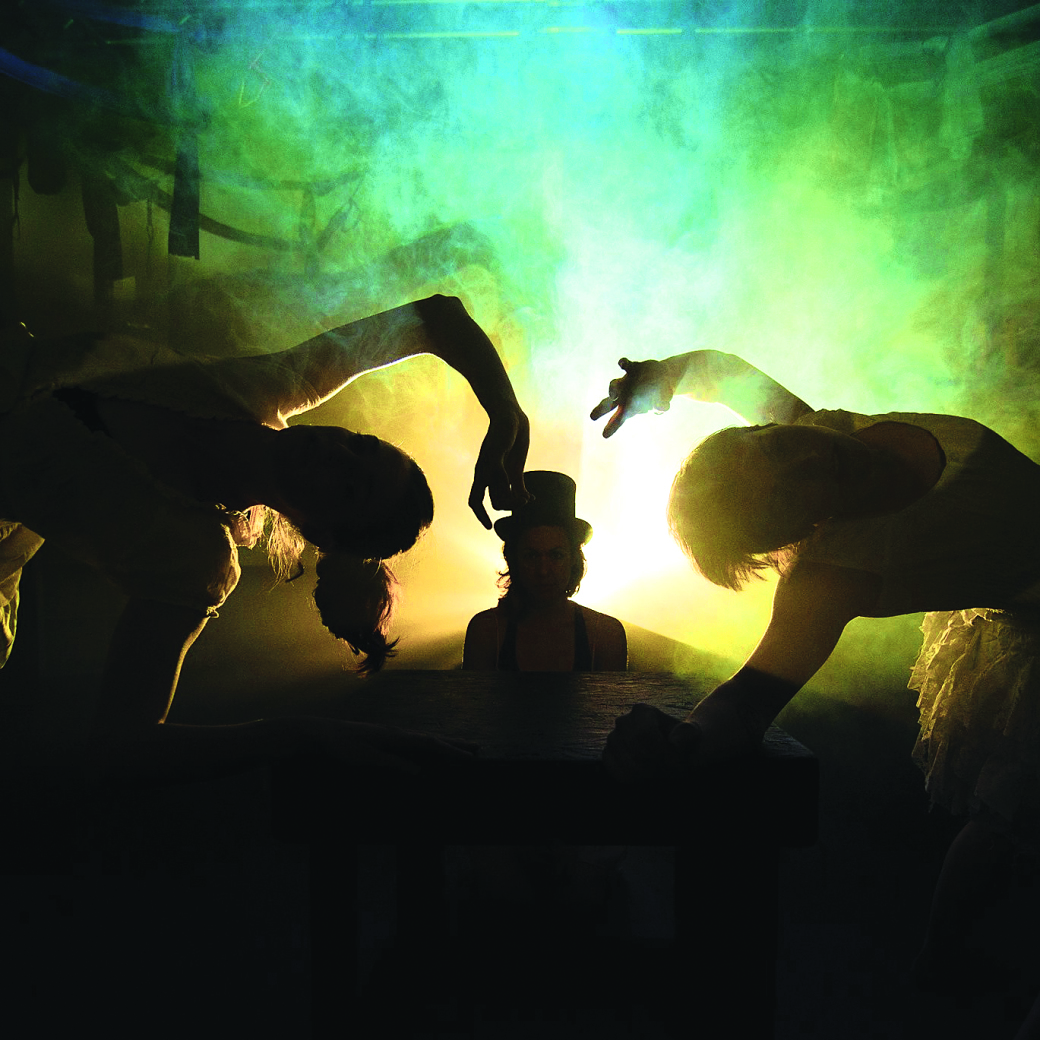 Immersive. Interactive. Experiential. Site specific. Whatever the term, the allure of art that invites your direct participation is very much alive all over Atlanta.
Sky Creature, LifeVisionVR, Fly on a Wall, gloATL, Flight of Swallows, Deer Bear Wolf, Out of Hand, PushPush Film &Theater, Seedworks, The Object Group, Hereafter Artist Collective, Liquid Sky, MakeShift Circus Collective, Serenbe Playhouse, and Brian Clowdus Immersive Experiences are among a growing array of ATL-based visual, media, and performing arts groups and companies creating sensory-heavy (and often phone-free) environments for exploring emotions, sharing stories, and building community.
Some of ATL’s most captivating storytellers and cultural connectors create all-enveloping environments:
• Sitting in the dark during The Black Box, you feel the cellist’s bow caress the strings. The lonely sounds massage your eardrum and open your heart.
• The night’s first sultry zephyr floats across your face, a slight kiss on your moist cheek. A sassy ingenue sails overhead from a trapeze in Ragtime: The Musical, her song of lust and passion floating through the air.
• You creep ever so gently through the Skin, the tactile environment in Sky Creature’s Sin Piel, that “holy place with a once divine presence, a place to confess, atone and heal, but that has now become a corrupted sanctuary…”  In order to pass through its gates, you must participate in a ritual that involves tasting the space you exist in.
These are just a few of the sensory experiences you may have encountered over the last few weeks, as a guest of these dreamweavers of the “stage.”
Immersive theater shows take place in abandoned warehouses or hidden basements or former mental institutions or public parks at midnight. They’re not just about stepping into an imagined world. They’re about exploring overlooked and mysterious corners of the city. Real estate-obsessed urbanites love nothing more than entrée to buildings that were formerly off-limits, and intrepid explorers love visiting neighborhoods that are off the beaten path.
In the past year or so, several theatrical productions and creative events took place in unusual performance spaces around Atlanta. Fly On A Wall presented Byte indoors, but Dave and Public Arcana took place outside Colony Square and in a West End park. Small audiences gathering in private living rooms last fall to see the one-woman play Shaking the Wind (Out of Hand Theatre) and in the bathrooms of private residences this past spring to participate in another one-woman play, Broken Bone Bathtub.
Deer Bear Wolf produced their re-telling of the Peter Pan story, Second Star to the Right, in three parts in three outdoor locations, including a trio of large tree houses. Audiences were encouraged to dress in style to witness their version of “CLUE” inside the Swan House at The Atlanta History Center. The Sleepy Hollow Experience by Serenbe Playhouse took audiences in and around an actual horse stable, and Brian Clowdus’ The Edgar Allan Poe Experience invited everyone to enjoy a cocktail while following the tormented author in and out of four 19th-century rooms at the Wren’s Nest in West End. And back in February, gloATL held a screening of their documentary A Night of Alchemy and served food and drinks in the empty shell of the abandoned Rhodes Theater on Peachtree Street in Midtown.
Curious Holiday Encounters (7 Stages Theatre, The Object Group, Weird Sisters Theatre, etc.), The Golden Record, Dead Poets Lounge, and The Black Box (all by Hereafter Arts Collective in collaboration with other artists), and especially TRANSMIGRATION and Sin Piel by Sky Creature (formerly Saiah), also banished traditional theater’s Fourth Wall and pulled audiences out of comfort zones and deep into other lives, eras, psyches, dreams, and dimensions.
Beginning this month and into the fall, curious culture seekers and anyone seeking authentic human connection can dive head first into several immersive experiences. Mediums Collective’s first project Are We There Yet? will guide audiences through a labyrinth they’ve constructed at Windmill Arts Center in East Point where you encounter ritual and individual expressions of grief before being invited into spaces of healing. Other opportunities include gloATL’s month-long “activation” of the contemporary art in the Cousins Galleries, The Object Group’s multi-media exploration of anti-Arab racism in Camus’ “The Stranger” at 7 Stages, Liquid Sky’s steam punk celebration of the 20th anniversary of The B Complex artists studios in Oakland City, and the return of The Poe Experience with its Sleep No More-style of multi-room, interactive (and potentially confrontational) performances. 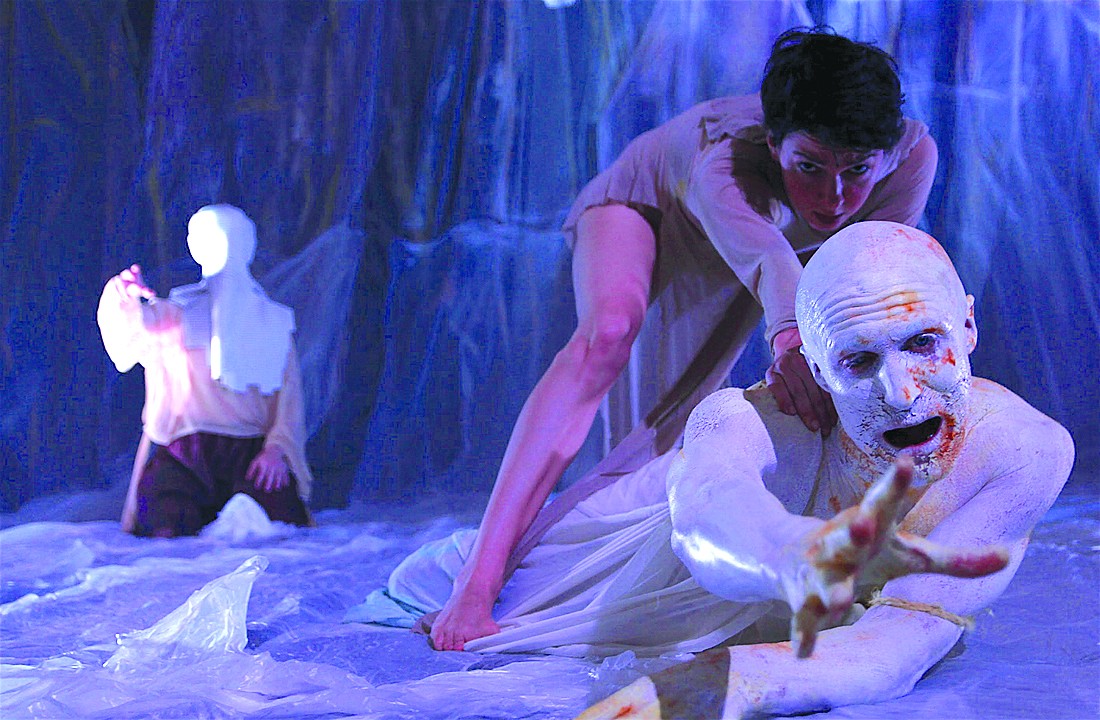 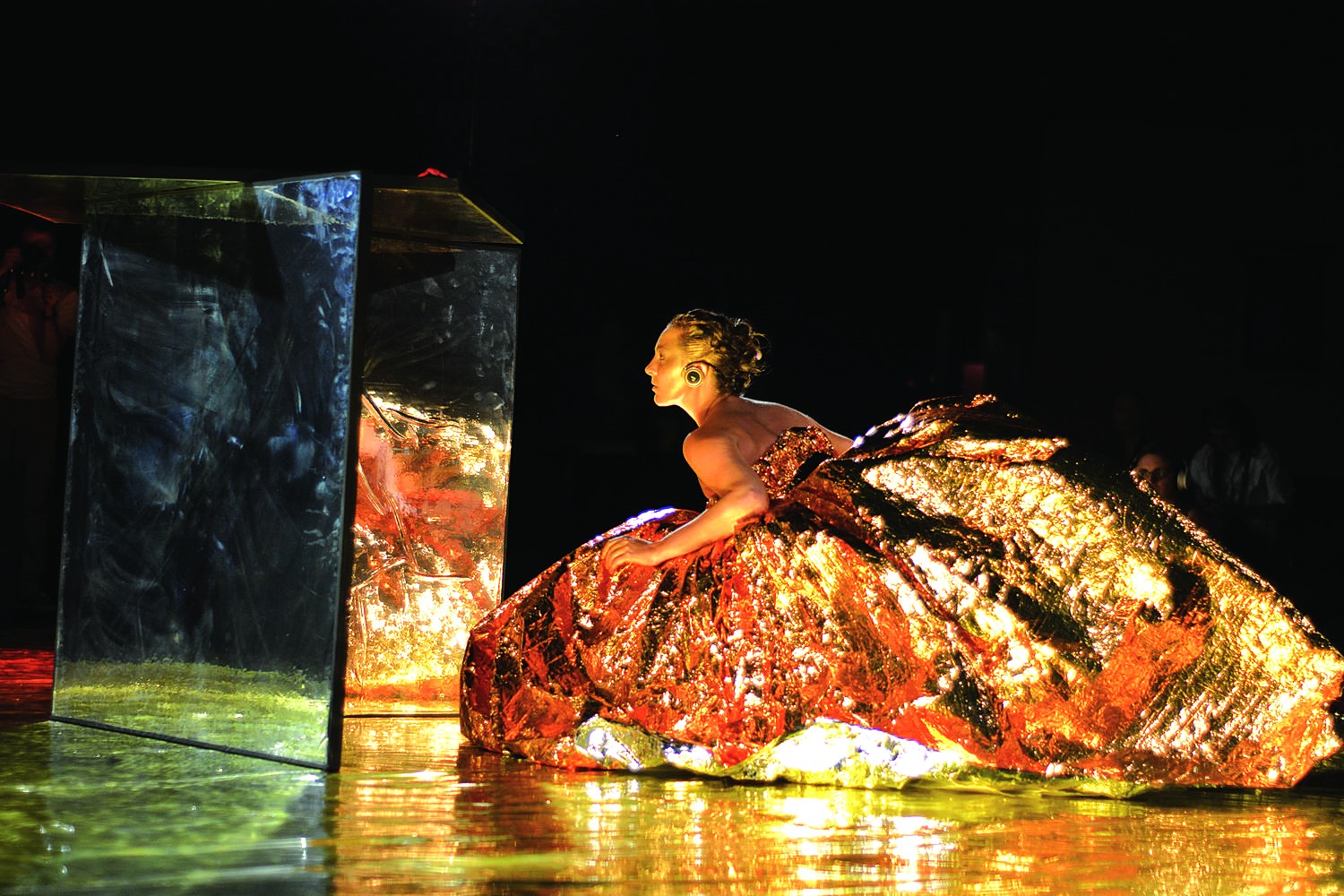 'Hz' presented by Fly on the Wall. Photo by Paige McFall.

These days, the average age of audiences attending the often excellent productions at the more established subscription theaters tends to be 45 or older. Why are millennials and their 20-something siblings avoiding these more traditional theater and seeking out something — anything — immersive or interactive?
“Younger audiences are restless. They’re definitely less interested then their parents or grandparents in seeing a show on a stage,” says Object Group founder (and former 7 Stages associate artistic director) Michael Haverty. “They don’t want to sit in seats for two hours or more watching actors recite lines. Nowadays, everyone wants to talk to the ringmaster. This is all part of the evolution of the art of theatre.” Haverty adds, “Millennials want accessibility and flexibility. They want to be able to touch someone, be part of the performance; anything to feel part of the ‘family’ of performers around them.”
Over the past decade, Haverty, an accomplished puppeteer and director, has created some of the most exciting and innovative work in the city. The Navigator (2013) at 7 Stages and The Breakers (2016), both presented at The Goat Farm, were popular with younger audiences who were fascinated by the surprising use of puppetry, video projections, sound effects, specially-designed props and, in the case of The Breakers, an entire house built inside a cavernous 19th century-era brick-walled factory.
Haverty left his position at 7 Stages last year to spend more time with his young son. “I’m still full of ideas for new theater works, but I’m really not that interested in directing actors on a stage anymore.”
Another multitalented Atlanta artist who’s worked in a wide range of settings is Nicolette Emanuelle, a classically trained cellist and experimental storyteller. In 2016, Emanuelle helped start Hereafter Artist Collective and began hosting the Dead Poets Lounge, a one-night event in various locations that combines literature, circus arts, acting, and live music to bring to life the poems of dead poets. Their promo blurb read as follows: “Imagine The Raven is a woman, watch Porphyria’s Lover dance in the air, and let your imagination go wild.”
Emanuelle thinks younger audiences are not so much bored with traditional theater, but desperate for something bolder. “So many people are unemployed or underemployed. They crave something that will snap them out of their funk!” She’s quick to add, “Don’t get me wrong. I really love millennials. Believe it or not, they actually have hope for the future.”
This looser, experience-based vs. plot-based approach to theater and storytelling happens in a real, physical space alongside fellow humans as opposed to virtual or smart-phone space so many people live in. Being in such close proximity to performers also heightens an awareness of the artist’s physical body. Voyeurism is part of any theatrical experience, but participatory performance often involves physical touch. In many instances, you can share an intimate one-on-one encounter with a performer.
“As a female and a professional aerialist, I’m not comfortable with random people touching me,” declares Marilyn Chen, owner of the cirque-style entertainment company Liquid Sky. “But I understand how much everyone seems to crave authentic connection. As performers, we’re able to look into people’s eyes in a way that most nonperformers can’t. The people watching us are able to experience a kind of intimacy that they seldom have in their daily phone-focused lives.”
Few Atlanta storytellers have been as bold and adventurous with sensory performance as director/playwright Marium Khalid. Just a few years ago, Khalid was the toast of Atlanta theater with her company Saiah and their daringly immersive productions. City of Lions and Gods was ArtsATL’s choice for best production of 2011. The following year, the even more ambitious Rua | Wülf, an adult retelling of the Little Red Riding Hood story that took audiences in and out of every corner of the Goat Farm, was voted Best Play by the readers of this publication. But after Saiah’s critically acclaimed outdoor production Terminus in 2014, Khalid dropped out of sight.
Khalid has returned with a new production company, Sky Creature, and a new show, Sin Piel, which was presented last May in The Circus School building in Grant Park. Khalid describes Sky Creature as “the next evolution of Saiah.” In her words, “We dive into truths from all perspectives and explore them through a new form, using scent, taste, touch, sight and sound — and a new form of virtual reality like you’ve never experienced before.”
Sin Piel is an enveloping sensory experience inspired by “the ‘Anatomical Venus,’ mental illness, and an exploration of spiritual darkness.” After suffering a serious, life-threatening illness over a period of two years, Khalid decided to create Sin Piel as “a journey that draws us into the innermost sacred parts of our spiritual and physical anatomy …(where) we explore the shadow and light of our internal being, as well as how we choose to engage with our individual pain …”
The scrupulously tactile and gloriously surreal Sin Piel, like all the best immersive theater works, seems to have the same goal as theater or art in any form. Namely, to move, to engage, to amuse, to enlighten, and to connect. To make us feel less alone and to build empathy and, ultimately, to make that authentic human connection all living beings long for.