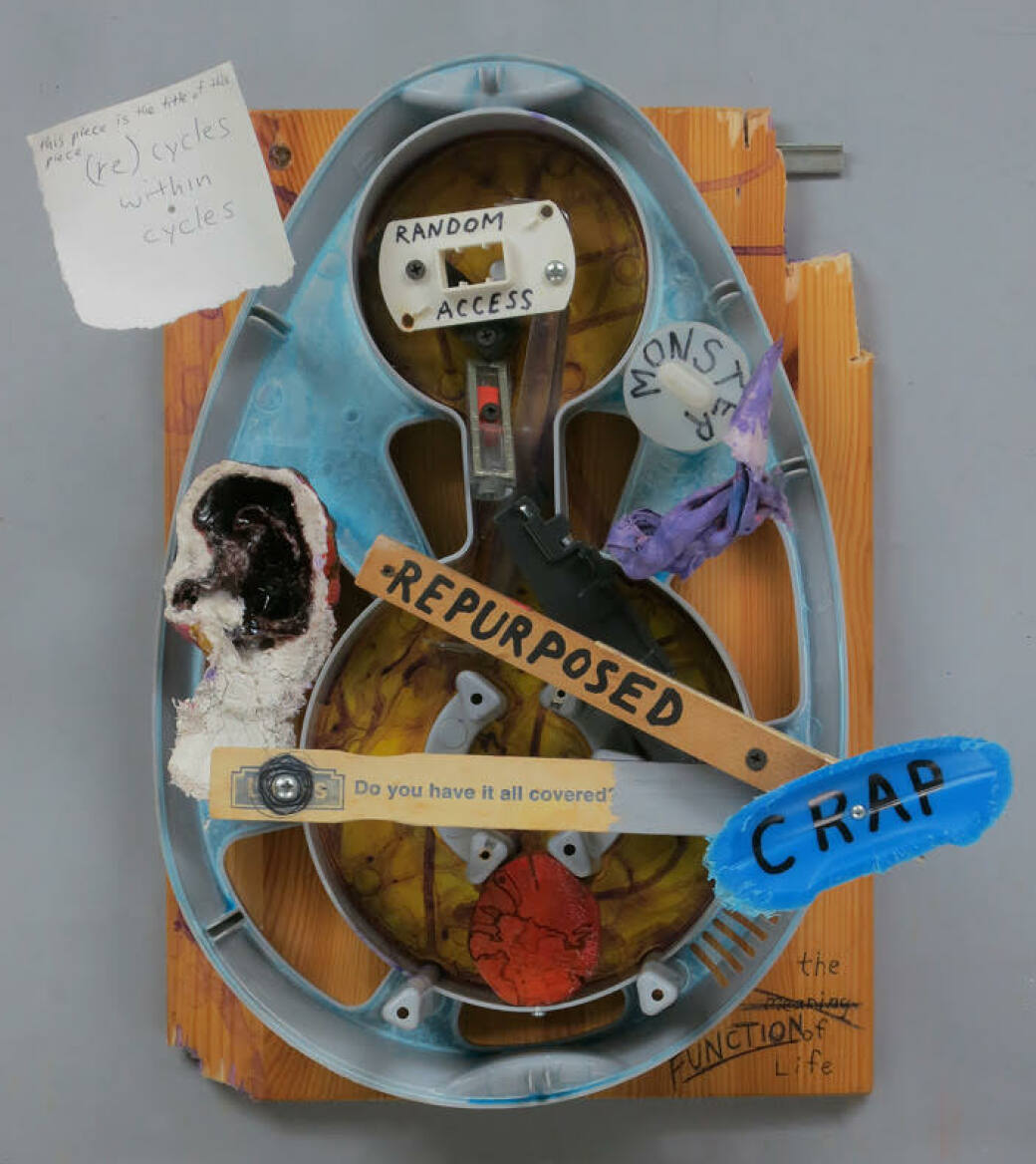 Think “waste not, want not,” as my mother used to say, or “one man’s trash is another man’s treasure,” as Kelly Hogan sings on The Jody Grind’s 1991 album of the same name. Those are shorthand themes for Repurposed, a special two-day-only (July 26-27), juried art exhibition at 378, the newly launched gallery and performance space on Clifton Road in Candler Park. Friday’s opening includes a celebration of the life and times of Deacon Lunchbox hosted by Bill Taft, featuring live music, film/video, and poetry by guest performers.

The Repurposed call for submissions specifically solicits two- and three-dimensional works including ready-mades, assemblages, found objects, aesthetically repurposed items, artistically reused interactives, curbside manipulatives, and over-painted prints and paintings. From such a wide casting call, a rogue’s gallery of offbeat, second-hand wonders will be on display in a fitting (repurposed building) showcase.

“The idea is to get people to view repurposed items as valuable in some way,” says chief juror Clare Butler. “It’s a commentary on our throw-away culture and the notion that, when you think something only has one purpose, you discard it after using it, even though it may have meaning for someone else.”

Speaking of repurposing, as Lady Clare, Butler was an original member of Now Explosion, a pioneering DIY-pop band which embodied the kitschy glam-drag-dance scene that flourished in Atlanta in the 1980s. Lady Clare also made regular appearances on the American Music Show, a queer public-access TV program produced in Atlanta between 1981 and 2005, which featured local celebs including RuPaul, Larry Tee, DeAundra Peek, Duffy Odum, Tom Zarrilli, Lady Bunny, and Jayne County.

Zarrilli, an actor, journalist, former club impresario, and retired school librarian, was recruited to manage 378 by singer-songwriter Clay Harper, who, with his business partner Mike Nelson, co-own the building, along with being the co-founders of Atlanta’s Fellini’s Pizza. At the opening in May, Harper performed selections from his most recent album, Bleak Beauty, in the performance space downstairs from the main gallery, followed by a set from Kevn Kinney & Friends.

For the opening of Repurposed, Zarrilli is delving into the archives to pay tribute to Deacon Lunchbox, the stage name of poet-performance artist Tim Ruttenber. A gifted language wrangler and fearless performer, Ruttenber possessed a sharply honed sense of the absurd and a keen eye for the devil’s details. Rarely deviating from a bellowing rant, Deacon Lunchbox recited poetic ruminations, which he called “redneck psychobabble,” on subjects ranging from lumberjacking, bikers, sex, and terrorism to suburban blight and cheese-and-pickle sandwiches. Usually, he accompanied himself by smacking the side of a surplus naval torpedo with a carpenter’s hammer and hollering into a sheetrock bucket to achieve special reverb effects. In 1992, on the way back to Atlanta from a gig in Pensacola, Florida, Ruttenber perished in an automobile accident along with two members of The Jody Grind, Robert Hayes and Rob Clayton.

“I look back on Deacon Lunchbox as a living found object, a stranger in a strange band,” Zarrilli says.

The same socio-cultural impetus that spawned Now Explosion and Deacon Lunchbox begat the Opal Foxx Quartet, which included Ruttenber, Taft, and lead vocalist Benjamin (Robert Dickerson, who died in 1999). The latter was the subject of Jem Cohen and Peter Sillen’s award-winning documentary film Benjamin Smoke (2000). Back in the day, Zarrilli successively managed the Nitery and Celebrity Club, two venues located blocks apart on Ponce De Leon, where these and many similarly inclined artists frequently performed.

“Bill (Taft) and others in his circle are the last remaining connections to that milieu,” Zarrilli says.

Among the scheduled tributeers is Rupert Fike, whose most recent book, Hello the House: Poems (Snake Nation Press), was named one of 2018’s “Books All Georgians Should Read” by the Georgia Center for the Book. James Kelly, frontman for Slim Chance & the Convicts, will perform two songs: "Loweena (the Urban Redneck Queen)” — which Deacon Lunchbox regularly sang with the band at the Austin Avenue Buffet and other “redneck underground” haunts, most of which are long gone — and “I Miss You Most on Sundays,” a poignant remembrance of Ruttenber by way of his passion for NASCAR racing.

Vintage footage of Deacon Lunchbox will be screened, including Neil Fried’s short feature film, Lawrence of Lawrenceville Highway, and “home video” shot by Judy Rushin (now an art professor at Florida State University) of an outing to Road Atlanta in which Deacon, using a can of insect repellent as a microphone, interviews “the greatest American race car driver from France” (Taft). A concert clip of Deacon performing with the Opal Foxx Quartet on the Georgia state capitol steps may also be included.

“Deacon’s style was assemblage,” says Taft. “On stage, he was a kinetic sculpture, waving a chainsaw, shooting a blank gun, banging a hammer on an oil drum, flashing plastic breasts. His life was dedicated to repurpose. In the mid-’80s, he exiled himself from the hippie era, left the mountains of North Carolina, moved to the heart of midtown, and refurbished his life. He was born again as a poet and performer.”

In Western art history, the tradition of repurposing objects for artistic purposes stretches back through millennia. Butler recalls being dazzled as a youngster by an unusual painting she ran across in an art book. Vertumnus, a portrait by Giuseppe Arcimboldo, a Mannerist artist, was painted in Milan around  1590–1591. It depicts Holy Roman Emperor Rudolf II with a face and torso fashioned from flowers, fruits, and vegetables, symbolizing the Roman god of seasonal metamorphosis and natural bounty.

“I was fascinated by that painting and the idea of combining random things to create a recognizable image,” Butler says.

In the 20th and 21st centuries, the technique of altering and recombining pre-fab and found objects to serve the artistic muse is manifest across categories ranging from surrealism and pop to minimalism and “visionary” (contemporary folk) art. A few decades ago, Atlanta-based artist and musician Lonnie Holley initially garnered international attention with his deeply evocative assemblages constructed from discarded objects (farm implements, bicycle parts, furniture, bric-a-brac) and repurposed materials (wood, cloth, glass, wire, metal), which were found on the side of the road, along railroad tracks, in fields, drainage ditches, construction sites, and everywhere else his keen curiosity led him.

“When people use material like that, in what’s considered an ‘untrained’ manner, some people say it’s because they can’t afford art supplies, but that’s beside the point,” Butler observes. “They’re using what’s available as an artistic medium, which is relevant to the artist’s life and experiences. As a result, the art is more meaningful than if they went to an art supply store and bought a nice set of acrylic paints.”

“My personal taste tends toward found objects, which have been repurposed into an artistic vision by combining or manipulating them, rather than something picked up by somebody that coincidentally looks like something else,” Butler says.

Regardless of genre, technique, or motivation, elevating the status of discarded things and encouraging their accumulation runs against popular cultural trends focused on decluttering, “death cleaning,” and filtering out possessions that fail to “spark joy.” Butler views the situation through her own lens.

“I don’t think you should hang onto things you don’t want,” she says. “On the other hand, re-envisioning or reimagining things is a way to entertain yourself and create the feeling that value in the objects around you arises from their artistic, rather than utilitarian, nature.”

“If something doesn’t spark joy,” Butler adds, “reuse or repurpose it so it does.”

Or, as Deacon Lunchbox used to say: “Life is an illusion, so you might as well make it a good one.”