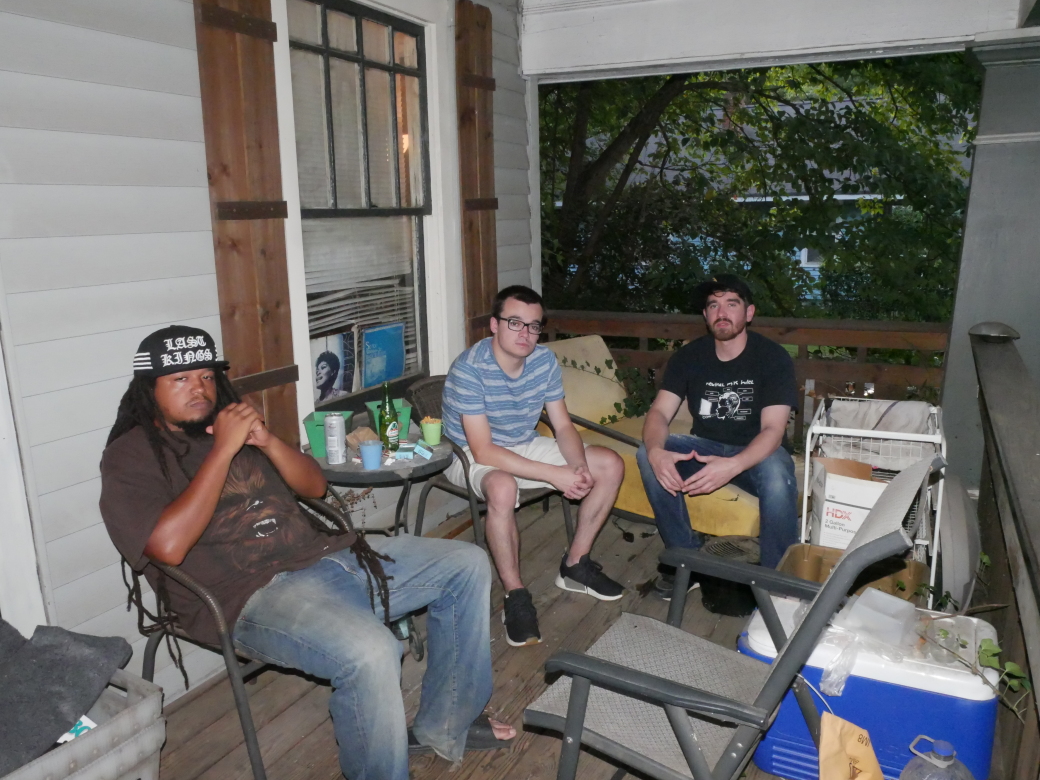 Photo credit: Jasmine Butler
DEALIN' WITH IT: DT (from left), Tvpes, and Obeah the crew that behind 'Pizzagate.'
By Chad Radford Friday August 2, 2019 04:00 PM EDT

Back in March, Adam Venerable, better known as Obeah, checked in with a video for a new song titled “Against the Grain.” The video, created by longtime cohort Tvpes (Anthony Wendelboe), is a saturated visual accompaniment to a slow-burning and politically-charged mantra that finds Obeah sharing verses with his musical mentor Chuck D of Public Enemy.

This week, Obeah and Tvpes return with another new song titled “Pizzagate.” Tvpes created the beat, and the song also features verses from DT of the Difference Machine, who is reportedly hard at work producing a new album.

In the meantime, “Pizzagate” builds upon the same tone of intellectual exhaustion and brewing outrage that are just part of coping with a day in the life of America circa 2019. This time, however, Obeah channels his creative energies into a deep, inward rumination to come back with a spiraling stream-of-consciousness lyrical collage driven by lines such as “Now America has been defined by this hatred / Searching online trying to find something sacred.”

“It's really just about living in the absurdity that is now,” Obeah says. “Obviously the song isn't about Pizzagate, but it is a subconscious nod to the absurdity of the reality that we currently live in. The theme and the aesthetics of the song draw from that nervous and uncomfortable feeling that comes from trying to wade our way through this fucked up place that everyone is in.”

The single dropped Friday August 2, in time for Obeah and Tvpes to appear on stage at Terminal West when Daily Bread headlines an evening of hip-hop and EDM.
Obeah also appears in the song “A Loss In Electrical Power” on Daily Bread’s latest album Navigator, Standby.

“Rhett Whatley hit me with this concept to write a song from the perspective of an astronaut who is in orbit, and is kind of losing his mind,” Obeah says. “The crazy thing is, when he asked me to do it, I had just finished listening to a Radiolab episode in which they were interviewing all of these astronauts about their experiences in space. So I was armed with all of this knowledge and these ideas,” he adds. “There’s all kinds of random stuff in that song, but everything I wrote for it comes from the perspective of real astronauts.”

Obeah plans on rolling out several new singles throughout the year, so keep an eye and an ear out for more music coming soon.

Mass of Entrails was recorded one night during practice at Notch 8 Gallery. The idea was to turn out something quick that sounded good enough to sell at shows, and to stamp in time the current lineup, featuring King on vocals, Josh Feigert and Mike Koechlin on guitar, Ryan Bell on bass, and Tyler Kinney playing drums.

“We are working on a new album, but it's taking a long time,” King says. “In the back of my mind I’m always worried that we might not finish, or it won’t ever come out. So I wanted to have some documentation of how this lineup sounds. There are some songs that will be on the next album whenever that's done. Some of the riffs on the tape are things I’ve been working out in my head for 20 years.”

Barnwell has one show on the calendar coming up at 529 on Sept. 18. For this show he has assmebled a lineup in which he plays bass alongside bass player Chris Ware and drummer and keyboard player Max McDonough. Both Ware and McDonough are on loan from mathy post-punk band Casual Tiger.

Much of Barnwell’s time between these Picture One offerings was spent working on various other musical endeavors, including reissuing French goth-punk group Asylum Pary's first two LPs, 1988's Picture One, and '89's Borderline. He also teamed up with his songwriting partner Ian Deaton to release a discography LP covering Atlanta synth-punk group the Modern Mannequin's output from 1983-1985.

In the meantime, Barnwell and Deaton have also composed film scores for The Arbalest and Poor Jane as well as multiple short films, PSAs, and trailers. As a result, much of the music heard throughout Bright Spot and the Midnight Sun takes shape with more cinematic and orchestrated soundscapes punctuated by up front choir elements and more defined changes in thematic elements. This one is definitely for fans of the Sisters of Mercy circa Floodland, and the Cure’s Faith LP.

Barnwell has also recently completed recording and engineering Deaton’s forthcoming solo album which should arrive later this year. The album's title remains to be determined.

In other new releases news, rapper Victor Mariachi recently dropped a new video for the song “Preyer” to appear on his album, Eleven Eleven.

Trappy Bats the latest release from Moon Diagrams, aka Moses Archuleta of Deerhunter is out August 10 via Geographic North Records. Check out the release party at the Sound Table’s Space 2 that night. Bradford Cox also performs.

Last, but certainly not least, on Aug. 2, Neurot Recordings reissued a remastered new version of Neurosis & Jarboe’s mammoth 2003 collaboration album. The recordings were remastered by Bob Weston, and include new artwork via Aaron Turner. Both artists summon the most beautiful and harrowing qualities in each other, culminating is a haunting and inspired collision of post-hardcore grind and Southern avant-garde atmosphere — a high mark for both artists. The CD and LP arrive Aug. 2, less than a week before Neurosis graces the stage in Heaven at the Masquerade on Aug. 7.