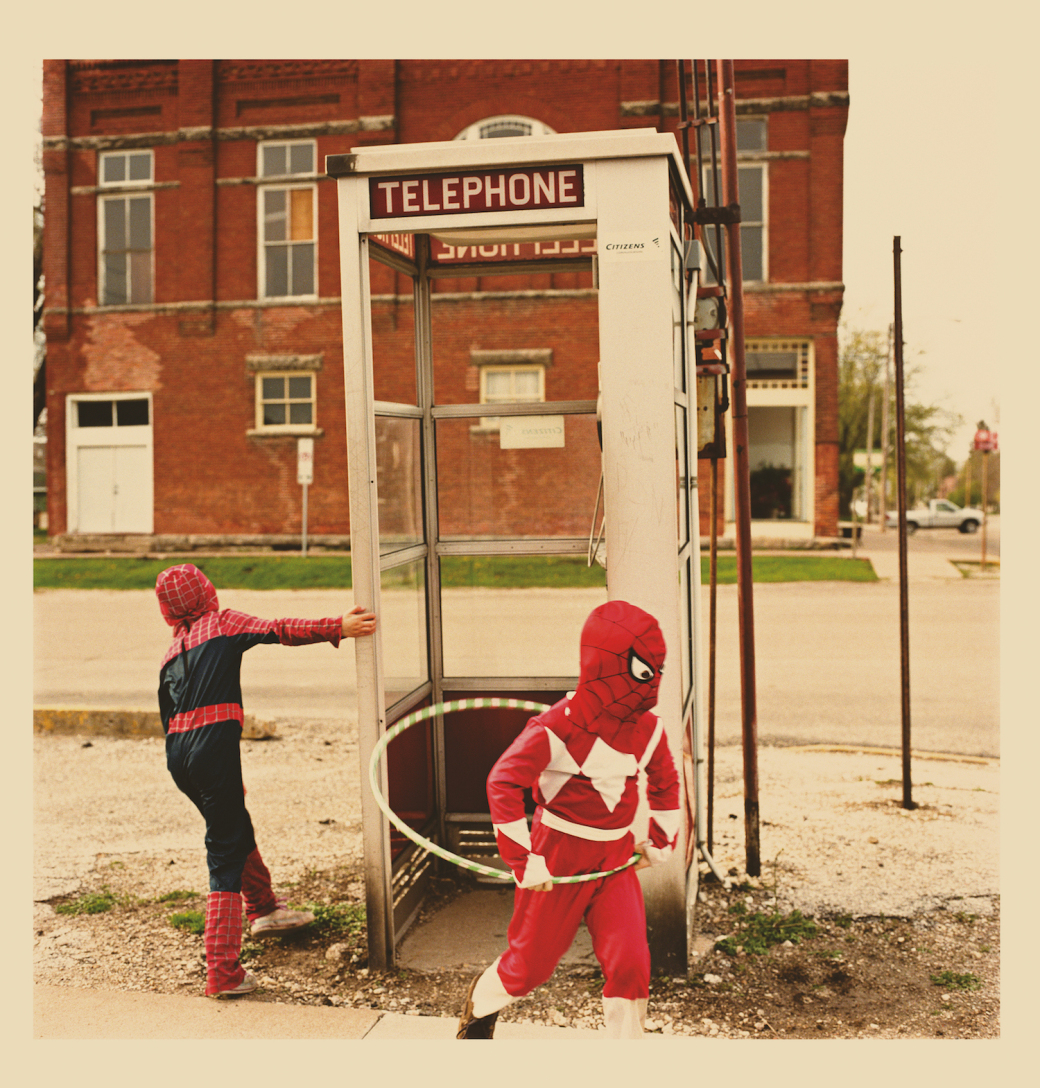 Photo credit: Chris Verene
CHRIS VERENE ON DISPLAY NOW: 'Nico and Mercedes' is one of Chris Verene’s photographs on display at Marcia Wood Gallery through October 12. The world premiere of Verene’s "Home Movies" is October 10 at the Landmark Art Cinema.
By Doug Deloach Wednesday September 25, 2019 11:12 AM EDT

Some folks’ home movies are more interesting than others’. For the past four decades, Chris Verene has been documenting the saga of his extended family in photographs and, more recently, on video. In the process, the former Atlantan has created a remarkable body of work, which has garnered national and international critical acclaim and a fair amount of popular renown.

On Thursday, October 10, as part of Atlanta Celebrates Photography, the Landmark Midtown Art Cinema will host the world premiere of Verene’s Home Movies (2019), which chronicles the hardscrabble life and troubling times of the artist’s family, friends, and neighbors in Galesburg, Illinois, an economically depressed rural city of about 32,000 located 45 miles northwest of Peoria. A post-screening panel discussion featuring Verene; photographer Ashley Reid; and Mona Bennett, Ambassador of the Atlanta Harm Reduction Coalition, will be moderated by Felicia Feaster.

In conjunction with the screening of Home Movies, Marcia Wood Gallery is exhibiting a selection of Verene’s photographs along with a video-loop of select vignettes from an earlier edition of Home Movies, which was released in 2014. Verene attended the gallery opening September 18 and will be at the closing reception on October 12 at Marcia Wood Gallery in Castleberry Hill.

Born in 1969 in DeKalb, Illinois, Verene moved with his family to Atlanta in 1982. He attended Druid Hills High School, double-majored in film studies and philosophy at Emory University and earned an MFA in photography at Georgia State University. His father, Donald Phillip Verene, is the Charles Howard Candler Professor of Metaphysics and Moral Philosophy and director of the Institute for (Giambattista) Vico Studies at Emory University. His mother, Molly Black Verene, is assistant director of the Institute.

In the ’80s and ’90s, Verene made his mark on the alternative arts scene in Atlanta as a founding member of Dairy Queen Empire (shortened to DQE after lawyers got wind of the unauthorized moniker) with Grace Braun (now Anna Trodglen) and Zak Sitter. A founding and former member of the Rock*A*Teens, who proudly and loudly shoulder the legacy of Cabbagetown rock in the 21st century, Verene also founded Bach on a Hook with Marty Matteson, which showcased interpretations of J. S. Bach’s Cello suites on percussion, drum set, and viola.

Verene produced a lot of the artwork for his bands’ albums. His photograph of a house crushed by a tree during a tornado adorns the cover of the Rock*A*Teens 2018 release, Sixth House. Verene currently lives in Brooklyn, New York, with wife Ani (pronounced ahn-nee) Cordero, a Puerto Rican musician and activist, and their son Nico.

Doug DeLoach: When did you start taking the photographs that led to the Galesburg family series?

Chris Verene: In 1986, when I was a junior in high school, I got a camera and learned how to develop film. I also borrowed a medium-format camera around that time. My family was my first subject. I wasn’t keeping records then, but I know I was making contact sheets in the high school darkroom of stuff that I shot when my family would go to Galesburg to visit.

When did you start thinking about photography from an artistic perspective, as opposed to merely snapping photos while on a family vacation or at a birthday party?

CV: Even before I had my first camera, in freshman or sophomore year, I took photos with my mom’s point-and-shoot camera. That was when I was in Dairy Queen Empire, and we were making art pictures, which was before I started making the family pictures.

From the beginning, I knew it was art and I knew what art was. I came from a background that made me aware of the significance of what we were doing. Even the earliest photographs were made with artistic intention.

There is an often-quoted review of my work in the ’90s, which says something like, ‘Chris Verene is like Diane Arbus.’ I remember thinking at the time, ‘That’s very astute of the New York Times critic to say so, because, when I was a kid, I was aware of Arbus’ work. My parents had one of her books.

When did you move to New York and what prompted the relocation?

CV: I moved around 1999-2000. I’m a total homebody and never would have moved, but I had this ongoing long-distance relationship with Ani (Cordero), who had been living in Atlanta. I used to take the Greyhound bus to Tucson to visit her. That got to be difficult, so we said if one of us is going to move, where could we both move and live together?

If it hadn’t been for Ani, I would still be living in Cabbagetown. I got an adjunct professorship at the School of Visual Arts in Manhattan, and then the Biennial happened (the 2000 Whitney Biennial, Verene’s breakout exhibition).

The subject of your photography and Home Movies are people who live in this economically depressed city in the Midwest. You’re often chronicling a bleak, depressing side of American life. Do you ever have misgivings about pointing the camera at or videotaping a particularly discomfiting scene?

CV: No, I don’t. You know, I’m an old teacher. I’ve been working with students who work on the streets and document all kinds of things. When I’m holding the camera, sometimes I’m looking for some balance. I’m hoping there will be some joy or some humor, and (that) it’s not all about sorrow.

The fact is, economic depression in the area that includes Galesburg is and has been suffocating. My taking pictures of what’s happening, if anything, will call attention to the situation and maybe wake people up about what’s going on. I can’t fix it, but not making the pictures or succumbing to some sort of emotional blockage isn’t going to help anybody.

We wouldn’t have the photograph of the “Migrant Mother” if Dorothea Lange had put down her camera because it was so fucking depressing in the Dust Bowl. And we need “Migrant Mother” to know what we’re up against when we look at society now. Change comes from looking at people and families that are not like yours and who are suffering more than yours. We need to be uncomfortable and know about people who are having a different struggle than we are.

About Home Movies, a New York Times critic wrote, “Made with low-budget cameras, it’s a riveting, sad and sometimes comical series of short, documentary portraits of poor, white working-class people getting by…” How accurate is that description?

CV: That was written about the first set of Home Movies (2014). I would say that was a good review, and he’s right. But now, the characters have evolved and the message has deepened. The newer work deals more directly with meth addiction, government housing, and includes stories about black people and children. The new work, Home Movies (2019), which we’ll be showing at the Landmark, is going to relegate that review to apply exclusively to the previous work.

Expound on the notion of the message or subject matter deepening.

CV: This isn’t the result of Chris waking up one day and saying, “My God, we have to deal with meth addiction.” It’s because I’m always following the same people around, and whatever happens happens. I wouldn’t be making a movie about meth addiction if my cousin wasn’t in prison for it.

What is the relationship between the photographs and Home Movies?

CV: What’s going on in Marcia Wood’s gallery, which includes both photographs and selections from Home Movies (2014), is a way of making the work reach a broader audience. It was never possible for me to make films before. Now that I can combine the two, it’s a way of creating a broader, deeper bond with the audience.

The show at Marcia’s is the best form my work has taken. It’s THE way to do it. You come, and you’re face-to-face with pictures which are big enough to walk into, and you also have this living movie, which is screening at the same time and contains some of the same characters in the photographs. Your mind can wander through the whole thing. The video will probably exist in a web-based form like Netflix at some point, but I’m still clinging to this idea that you have to show up and be with the work.

In Home Movies, you are more than just a documentarian. Your presence in the scene is not disassociated from the action, as in a traditional documentary.

CV: So many things are happening. I’m holding a baby while I’m filming or whatever it might be. There’s very little artifice or pretense about being “the filmmaker.” There is some voice-over narration, which I resisted for a while because I didn’t want to be the omniscient narrator. But now I think it works because, when you get down to it, most of my work is me explaining the work: This is my family, and here is my grandmother or my cousin, that sort of thing. In a sense, I’m a performative photographer. I’m on an endless lecture tour, explaining what is happening and who is in my pictures.

The videos are not really set up for someone to watch them unfold like a conventional narrative film. They need some narration. As much as I personally would enjoy sitting down and watching three hours of things unfolding, I’m making these films for a pop culture. I’ve always been interested in an audience beyond the museum, an audience that doesn’t have to have special training to appreciate the work.

My favorite photograph from the exhibition at Marcia Wood Gallery is “Nico and Mercedes.” I’m fascinated by the setting and the super hero costumes worn by the youngsters. The composition is so dramatic with the boys in motion and the deteriorating phone booth, which is an archaic thing evoking Superman’s secret identity, anchoring the scene.

CV: That photograph is one of my personal favorites. There is so much going on. The loss of the phone, which is a contemporary phenomenon. The various shades of red in the frame from the brick to the phone booth to the costumes. Fans will note there are costumes from two different eras of Spider-Man.

The kids are really in motion. At that age, they so much want to be superheroes. The hula hoop, which has some sort of imaginary power — it’s not about hula-hooping, maybe it’s a force field. That element of play in their body language is so powerful. They’re moving very quickly. It’s one of those pictures that I hardly can believe I made.

I’m turning 50 and I’ve been doing this a long time. I’m starting to notice that, although pictures are documents and they’re so specific, there is something spiritual going on behind the scenes, which may not have a physical manifestation in the picture, but actually counts for something.
(In “Nico and Mercedes”), while you can recognize all the shades of red and things like that, something about that picture sings and reaches people the right way. It’s made in a genuine way; it’s not constructed, I didn’t say, “‘Hey, kid, put on this costume, and stand over there and I’ll take your picture.” I don’t work like that. Sally Mann works that way, and it’s fucking great. But, for me, I have to be an observing photographer, and the spiritual message behind it has to be pure even if you can’t really tell what or where it is. That picture has it.

That’s what I got into photography and music for. That’s why I spend all my free time making art and all my money making this art. That’s why I will compromise everything and go into debt — because I’m hoping to get that phone booth picture.