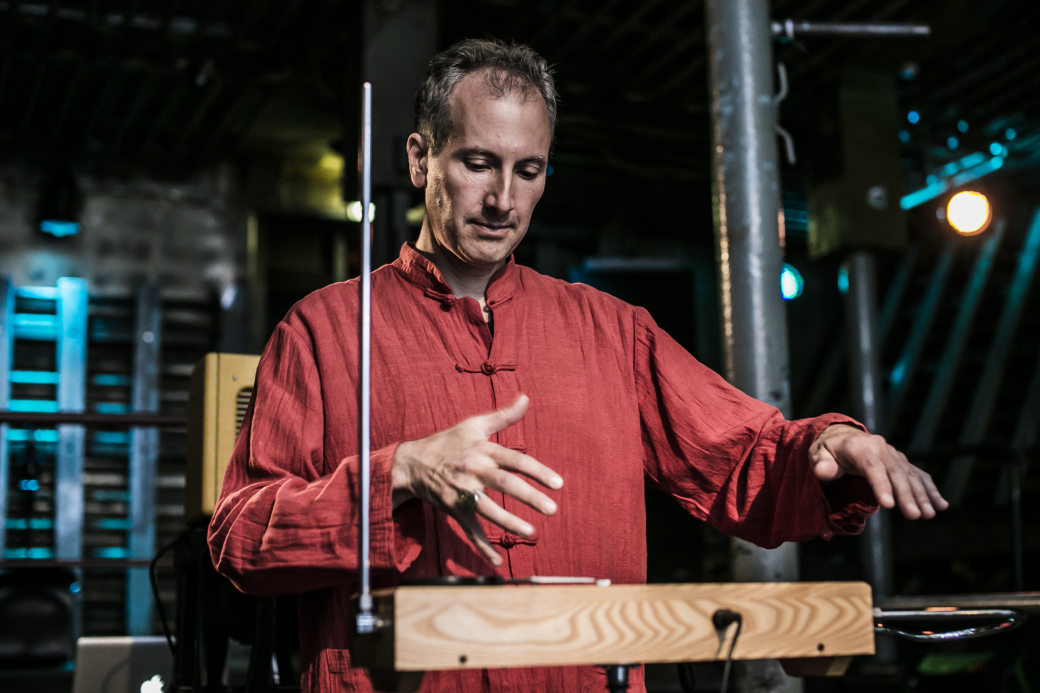 In Greek mythology, the consumption of ambrosia endowed the Olympians with immortality. In real life, ambrosia is another word for a mixture of fermented bee pollen and nectar, called “bee bread,” which is gathered and deposited by honeybees for sustaining the residents of a hive.

Ear Pollen is the title of a monthly concert series at 378 in Candler Park programmed by Atlanta percussionist Klimchak at the behest of gallery manager Tom Zarrilli. While immortality may not be in the offing, starting January 15 and running through the end of 2020, Ear Pollen will sustain experimental music fans in the Lo Gallery (downstairs) on the third Wednesday of each month.

“The idea is to showcase different niches of experimental music including electronic and acoustic styles ranging from jazz to noise,” says Klimchak. Known for constructing one-off instruments for imaginative performances, Klimchak once played instruments derived from kitchen tools while simultaneously cooking a meal for the audience. He says Ear Pollen will feature mostly, but not exclusively, Atlanta-based artists.

“Experimental music in Atlanta and elsewhere is divvied up into small sub-genres,” Klimchak says. “Ear Pollen will provide space where folks can listen to a variety of genres all in one place."

The first Ear Pollen concert features Andrew Levine from Hamburg, Germany, improvising on theremin and synthesizers. Born in New York City, Levine began playing violin at the age of six. He studied voice and earned an M.A. in computational linguistics and cognitive psychology at the University of Trier. Since 2010, while the theremin has been Levine’s primary instrument in solo and group settings, he also plays an 0-Coast (“oh-coast”) analog synthesizer, STEIM Cracklebox, and Haken Continuum (synthesizer).

Sharing the triple-bill with Levine are Helton & Bragg, an Atlanta-based drums/percussion and guitar/fretless bass duo (Blake Helton and Colin Bragg, respectively) who play mostly improvised, jazz-oriented music infused with electronic effects. Rounding out the program is Tim Crump, a local saxophonist, clarinetist, and composer whose music explores the intersection of jazz, post-classical, and free improv. Given that the inaugural Ear Pollen lineup features musicians working in closely related realms along the experimental spectrum, Klimchak says he is “anticipating a collective group piece will close out the evening.”

The 2020 Ear Pollen concert calendar currently includes JayVe Montgomery (from Nashville), Amplituba (Bill Pritchard), Kenito Murray, Hypnagogue (James Rosato from Massachusetts), Duet for Theremin and Lap Steel, and Jeremy Muller with many more musicians TBD. “I’m primarily interested in presenting solo and duet improvisation work,” says Klimchak. “That’s due to the size of the room and because smaller groups tend to create a more conversational atmosphere both between the performers and with the audience.”

With a performance resume that stretches back through the 1970s, Klimchak has witnessed and participated in the trailblazing efforts of Atlanta’s most adventurous music explorers. He sees the contemporary scene as a nurturing environment evolving along a mostly positive trajectory.

“It’s somewhat fragmented, but I’m beginning to see the same cross-pollination that made for a peak in the past,” he observes. “A Bent Frequency concert is attended by jazz buffs. A noise show at The Bakery is attended by classical musicians and rap producers. This situation leads to more experimentation across genres, which is needed to take us to the next level.”

Despite a recent spate of performance space closures (e.g., Eyedrum, Mammal Gallery, Murmur), new venues (e.g., The Bakery, Mother Bar, Mammal Gallery relaunched at Met Atlanta) are sprouting in their place. Says Klimchak, “I’m hoping the Ear Pollen series adds another dimension to a movement, which is carrying us toward another peak of experimental music-making in Atlanta.”

Because of its power to heal wounds and reinvigorate the body, Zeus, Hera, Apollo, and the rest of the Olympians sometimes ate ambrosia as a restorative. The Ear Pollen series comes with restorative powers of its own special kind, fit for gods and mortals alike.

Shooter, a new album by Jeff Crompton, is due for release on January 11. The eight-track album, which can be streamed and downloaded from Bandcamp (don’t “forget” to pay for it, Listening Posters), features the accomplished Atlanta musician and composer performing overdubbed multi-horn pieces and unadorned solos on alto and baritone saxes and clarinet.

Shooter is an impassioned response to the mass shootings in El Paso, Texas, and Dayton, Ohio, which left 31 people dead and some 50 wounded during a horrific weekend in August. It expresses with deftly structured imagination and acute sensitivity a range of emotions from anger and despair to unabashed hopefulness.

“I don't know how ‘important’ this album is in the grand scheme of things, but it's very important to me,” Crompton explains in an email exchange. “After the back-to-back mass shootings in August, it became a compulsion to me to record this music. This is an album no one asked for, few people will listen to, and one I absolutely had to do.”

The title song, which was written several years ago, vividly evokes a sinister, foreboding atmosphere. “It has been performed a few times in various guises, but I hope the nine-saxophone version on the album captures the menace and intensity I originally had in mind,” Crompton says.

While the past few years have been frequently disrupted by disconcerting events, including more mass shootings than anyone should have to count, the August massacres, which occurred 13 hours apart, pushed Crompton into an unusually deep state of despair.

“The motivations of the two shooters — white supremacy in one case and apparently just the desire to commit a mass shooting in the other — seemed emblematic of this uniquely American plague,” Crompton reflects. “The fact that we have chosen as a nation, not as individuals, to just let this keep happening is almost literally maddening.”

Other than expressing inner turmoil, Crompton hesitates to ascribe further significance to his work. “Writing music and playing the saxophone are about my only skills, and my only outlet to say something,” he offers, with characteristic self-deprecation. The music tells a different tale, fraught with complex emotions best rendered in the abstract by an artist willing to plumb the seldom-visited, shadowy depths of the soul.

"Slow March (through a dark place)" was written in one day, not long after the acrid smoke in El Paso and Dayton had dissipated. Crompton describes the recorded performance as “a dark, despairing piece of music; if it doesn't strike the listener that way, I haven't done my job.”

As a respite from the wrenching anguish (which nevertheless conjured up some exquisitely beautiful music), Crompton turned to the John Coltrane composition "Peace on Earth" and the African-American spiritual "There is a Balm in Gilead." Both tracks are magnificently affirming, standalone saxophone solos with no overdubbing.

“Despair followed by hope,” Crompton remarks. “I think working on this album has helped me reach a state of hopeful realism.

A house concert celebrating the release of Shooter is scheduled for Saturday, January 11. For more information, visit https://www.facebook.com/events/462029214698925/

On January 3, internationally acclaimed, Atlanta-based vocal artist, jazz performer, and social activist Virginia Schenck (who also goes by the nom de art “VA”) dropped her latest album Battle Cry. Available on all digital platforms and CD, the album, which was recorded in 2018, delivers a topically pertinent message in an assuredly swinging package.

In 2016, sparked by the election of Donald Trump, Schenck felt a renewed commitment to advocating for progressive change and resisting oppression and injustice. “Music is my resistance,” Schenck declares in an interview with Listening Post recorded a few months ago. “I mean that in the best of terms, not to be off-putting, but, rather, to be engaging.”

Schenck earned her activist bona fides almost at birth. Her grandmother was pregnant with Schenck’s mother while campaigning for the right of women to vote in Philadelphia in the 1920s. Almost a century later, this suffragette’s granddaughter co-led a pilgrimage to the Smithsonian National Museum of African American History and Culture with Rev. Kimberly Jackson, an ordained LGBTQ+ Episcopal priest and candidate for the Georgia Senate in 2020, and Dr. Catherine Meeks, executive director of the Absalom Jones Center for Racial Healing.

“I thought the world was getting better as I aged,” Schenck says. “I thought we were, for the most part, improving every year. Instead, we took one step forward and two back.”

On Battle Cry, her fourth album, Schenck is accompanied by Kevin Bales on piano, Rodney Jordan on bass and Marlon Patton on drums. Bales, a seasoned veteran who can be heard regularly at jazz clubs around Atlanta, has been collaborating with the singer for a decade. While he was living in Atlanta, Jordan taught at Georgia State University when he wasn’t touring or recording with the likes of Marcus Printup, Mulgrew Miller, and Russell Gunn. Most recently, Patton, a Georgia native, along with trombonist Dave Nelson, has been supporting Lonnie Holley in a genre-bending trio.

The music on Battle Cry includes soulfully interpreted renditions of familiar songs, such as Donny Hathaway’s “Sack Full of Dreams,” Dion’s “Abraham, Martin and John,” and “Bali Hai” from the Rodgers and Hammerstein musical South Pacific. It also features evocative takes on “America the Beautiful” and “The Pledge of Allegiance.”

Propelled by Jordan’s subterranean bass and Williams’ hair-raising saxophone, Schenck embellishes “Strange Fruit,” the protest song immortalized by Billie Holiday, with harrowingly abstract poignancy. “Hear My Battle Cry,” the album’s one original song, uses a funky, rolling groove to communicate a central directive: “Can we find the path to freedom by the truth in our lives/Find the courage, strength and hope to stand tall/Resurrect ourselves, correct ourselves, and pay our due/Hear my battle cry: I will live in truth or die.”

All in all, the jazz-inflected tidings of Battle Cry are well worth hearing and heeding. -CL-